Rembrandt and the art of compromise (©, available for consultation) 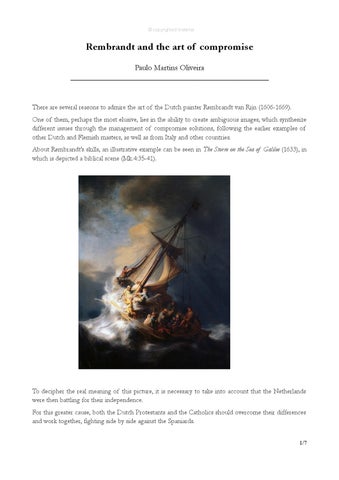 There are several reasons to admire the art of the Dutch painter Rembrandt van Rijn (1606-1669). One of them, perhaps the most elusive, lies in the ability to create ambiguous images, which synthesize different issues through the management of compromise solutions, following the earlier examples of other Dutch and Flemish masters, as well as from Italy and other countries. About Rembrandtâ&amp;#x20AC;&amp;#x2122;s skills, an illustrative example can be seen in The Storm on the Sea of Galilee (1633), in which is depicted a biblical scene (Mk.4:35-41).

To decipher the real meaning of this picture, it is necessary to take into account that the Netherlands were then battling for their independence. For this greater cause, both the Dutch Protestants and the Catholics should overcome their differences and work together, fighting side by side against the Spaniards. 1/7

The storm represents the war, and the boat is actually an allegorical composition, which blends two smaller boats sailing in opposite directions (the Dutch Protestants and Catholics).

Ambiguously, they have a common rudder and share the same mast, which is strategically placed between the boats, having two autonomous sails. Its base is hidden by the breaking waves, and at its top the mast forms the cross of Christ, i.e. the common reference that aggregates the several ropes linking the two boats. Like the flag above, also a rope with a subdivided tip flutters in the wind, underlining the same message. This idea of alliance was elegantly inserted by Rembrandt in other works, such as the paining usually known as The Night Watch (Amsterdam), which actually celebrates the common effort of the Dutch in defending their country.

Detail of the Night Watch, or The Company of Captain Frans Banning Cocq and Liutenant Willem van Ruytenburch. In addition, a Catholic leader (in yellow) supporting the Protestant commander (in black).

The bright woman holds the symbols of the Arquebusiers. Beyond that, she is Saskia (Rembrandt&#39;s wife), representing the rich and prosperous homeland, which must be defended by all Dutch.

On the opposite side, the darkened and frightened dog symbolizes the Spanish Habsburgs. Since Jheronimus Bosch, the dog systematically represents the Habsburgs in the Netherlands.

The same concern for unity between Protestants and Catholics is clearly visible in the painting Two Old Men Disputing (Melbourne), which indeed represents St. Peter and St. Paul, always arguing, yet complementary.

Rembrandt Two Old Men Disputing [Peter and Paul] St. Peter is a key reference for Catholics, as St. Paul is for Protestants. With his particular sense of humour, Rembrandt depicted St. Peter in a â&amp;#x20AC;&amp;#x153;papal throneâ&amp;#x20AC;?, trying to lecture St. Paul.

If separated, both St. Paul (the Dutch Protestants), and St. Peter (the Dutch Catholics) will face same destiny: the subjugation.

By this way, Rembrandt consistently expressed the need for communion, which lacked in the past, as can be seen in the works of Pieter Bruegel, in the previous century.

Pieter Bruegel Detail from the Fight between Carnival and Lent (Vienna), satirizing the internal conflicts between Dutch Protestants and Dutch Catholics (16th century). .

Rembrandt is deeply nationalist, and one can find numerous allegorical references throughout his works.

Expressing the defeats and hardships (examples): The Holy Empire

Rembrandt The stoning of St. Stephen (Lyon) The Netherlands

Expressing the revival of the nationalistic enthusiasm and hope (examples):

Rembrandt The raising of Lazarus (Los Angeles) After some important defeats, such as the loss of Breda to the Spanish troops (1625), in the 30s the Dutch nationalists recovered their impetus in a decisive manner.

The hairstyle forms the head of a Dutch lion.

The left cup was slightly deformed to represent the head of a dog (the Habsburgs).

The circle is a traditional artistic symbol of the unwanted union with Spain (often used by Bruegel, for instance).

As seen, there are symmetrical connections between the two sides of the picture, as well as hierarchical relations on each side, valuing the Dutch elements. In fact, the nationalist issue is a matter of utmost importance to the artist, who instead of obvious and direct depictions opted for more elaborate creations, challenging the viewer to interpret his designs. But besides these great political causes, also in more everyday issues Rembrandt used the same ability to find ingenious compromise solutions. This is the case of The Anatomy Lesson of Dr. Tulp (The Hague), originally commissioned for the Amsterdam Guild of Surgeons.

In this picture, Dr. Tulp performs a dissection of a human body, but the portrayed audience is not constituted by inexperienced students, but fellow colleagues and prominent figures of the city. Therefore Rembrandt had to be skilled in managing sensitivities, like Nicolaes Eliaszoon Pickenoy in the past, who in 1619 painted the precedent picture of this kind for the Guild, entitled The Osteology Lesson of Dr. Sebastiaen Egbertsz (Amsterdam).

Actually, this earlier work doesnâ&amp;#x20AC;&amp;#x2122;t even resemble a lesson, and because of that the subsequent painting, now by Rembrandt, stands out even more for its audacity and ingenuity. Thus, Rembrandt depicted Dr. Tulp as a teacher, but not only he isnâ&amp;#x20AC;&amp;#x2122;t looking at anyone, but also no one is actually looking neither at Dr. Tulp, nor at the corpse, as demonstrated by a careful analysis of the directions of the gazes. So, there is depicted a teacher, but no one is being lectured. This is just another example of the broad resources of Rembrandt, whose creations should be considered in a dynamic perspective.

Rembrandt and the art of compromise (©, available for consultation)

(E) Rembrandt and the art of compromise