From the Home of the T...Amazing Discoveries at the Ford Piquette Avenue Plant! 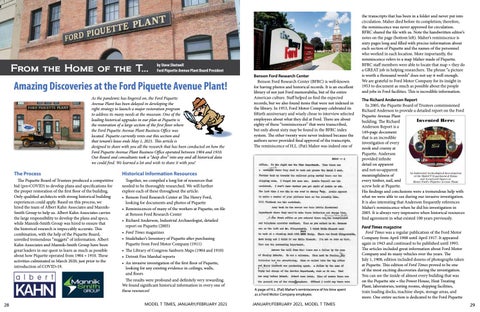 The Piquette Board of Trustees produced a competitive bid (pre-COVID) to develop plans and specifications for the proper restoration of the first floor of the building. Only qualified architects with strong historical building experiences could apply. Based on this process, we hired the team of Albert Kahn Associates and MannikSmith Group to help us. Albert Kahn Associates carries the large responsibility to develop the plans and specs, while Mannik-Smith Group was hired to ensure that the historical research is impeccably accurate. This combination, with the help of the Piquette Board, unveiled tremendous “nuggets” of information. Albert Kahn Associates and Mannik-Smith Group have been great leaders in our quest to learn as much as possible about how Piquette operated from 1904 – 1910. These activities culminated in March 2020, just prior to the introduction of COVID-19.

Together, we compiled a long list of resources that needed to be thoroughly researched. We will further explore each of these throughout the article: • Benson Ford Research Center at The Henry Ford, looking for documents and photos of Piquette • Reminiscences of many of the workers at Piquette, on file at Benson Ford Research Center • Richard Anderson, Industrial Archaeologist, detailed report on Piquette (2005) • Ford Times magazines • Studebaker’s Inventory of Piquette after purchasing Piquette from Ford Motor Company (1911) • The Library of Congress Sanborn Maps (1904 and 1910) • Detroit Fire Marshal reports • An invasive investigation of the first floor of Piquette, looking for any existing evidence in ceilings, walls, and floors The results were profound and definitely very rewarding. We found significant historical information in every one of these resources! Model T Times, JANUARY/FEBRUARY 2021

Benson Ford Research Center Benson Ford Research Center (BFRC) is well-known for having photos and historical records. It is an excellent library of not just Ford memorabilia, but of the entire American culture. Staff helped us find the expected records, but we also found items that were not indexed in the library. In 1953, Ford Motor Company celebrated its fiftieth anniversary and wisely chose to interview selected employees about what they did at Ford. There are about eighty of these “reminiscences” that were transcribed, but only about sixty may be found in the BFRC index system. The other twenty were never indexed because the authors never provided final approval of the transcripts. The reminiscence of H.L. (Pat) Maher was indeed one of

A page of H.L. (Pat) Maher’s reminiscence of his time spent as a Ford Motor Company employee.

the transcripts that has been in a folder and never put into circulation. Maher died before its completion; therefore, the reminiscence was never approved for circulation. BFRC shared the file with us. Note the handwritten editor’s notes on the page (bottom left). Maher’s reminiscence is sixty pages long and filled with precise information about each section of Piquette and the names of the personnel who worked in each location. More importantly, the reminiscence refers to a map Maher made of Piquette. BFRC staff members were able to locate that map – they do a GREAT job in helping researchers. The phrase “a picture is worth a thousand words” does not say it well enough. We are grateful to Ford Motor Company for its insight in 1953 to document as much as possible about the people and jobs in Ford facilities. This is incredible information.  The Richard Anderson Report In 2005, the Piquette Board of Trustees commissioned Richard Anderson to provide a detailed report on the Ford Piquette Avenue Plant building. The Richard Anderson Report is a 149-page document that is an incredible investigation of every nook and cranny at Piquette. Anderson provided infinite detail on apparent and not-so-apparent meaningfulness of every timber, nail, and screw hole at Piquette. His findings and conclusions were a tremendous help with what we were able to see during our invasive investigation. It is also interesting that Anderson frequently references Maher’s reminiscence when he did his investigation in 2005. It is always very impressive when historical resources find agreement in what existed 100 years previously. Ford Times magazine Ford Times was a regular publication of the Ford Motor Company from April 1908 until April 1917. It appeared again in 1943 and continued to be published until 1993. The articles included great information about Ford Motor Company and its many vehicles over the years. The July 1, 1908, edition included dozens of photographs taken at Piquette. This edition of Ford Times proved to be one of the most exciting discoveries during the investigation. You can see the inside of almost every building that was on the Piquette site – the Power House, Heat Treating Plant, laboratories, testing rooms, shipping facilities, train loading docks, machine shops, storage areas, and more. One entire section is dedicated to the Ford Piquette

Avenue Plant Business Office. A bonus discovery was that the date of the Ford Times photographs and Maher’s employment at Piquette coincide. We now have corroborating historical evidence from two sources – invaluable when conducting research, as you will see on the upcoming pages. Interesting observation: my early work was based on searching for the word “Piquette” in any/all publications. This edition of the Ford Times never came up in my searches, as the word “Piquette” does not appear in the July 1908 issue – it was simply called “the new factory.”

The Studebaker Inventory At first, I had little interest in the Studebaker Inventory. Studebaker bought the plant in 1911 after Ford vacated the building. Why should we be interested in what Ford left at Piquette? I was so wrong! This document – nearly 300 pages long – provided a very detailed inventory of every pipe, fixture, and mop bucket that Ford left behind. On the second to last page, we learned that Ford left a time clock and the inventory identified both the manufacturer and model number of the clock. We recently found an identical time clock, and it is now on display at Piquette. There is great information on all twenty-two buildings that were included with the sale from Ford – boilers, kilns, blast furnaces, etc. This inventory was conducted for insurance purposes but is now telling the story of what Ford leveraged to make Piquette a successful business.

DRAFTING ROOM - 3RD FLOOR Sanborn Maps Along with many insurance documents called Sanborn Maps, we also now have the Detroit Fire Marshal Reports on Piquette, circa 1904 - 1910. These combined resources tell an even bigger story on the building architecture at Piquette in regards to fire safety. These documents were used by local firefighters and insurance companies during the Piquette era. These maps also plot known tanks that were underground near Piquette. This is very valuable information to us today.

able to gather and - with cameras, flashlights, and ladders in hand - validate the information and take a closer look at whatever else we could find. It is important to note that the current tenant on the first floor did an extensive buildout with drywall and drop ceilings to fit its needs years ago; this was well before the Piquette Board acquired the building. We had to be prepared to see over, under, through, and around all of these modern obstacles. We also secured a high-quality inspection camera that could take photographs through very tiny holes drilled in the drywall. Our mission was clear – we needed high accuracy and details to develop our final plans. We indeed found some very interesting structural remnants of unknown firewalls, a stairway opening, and telltale partitions. All of these details were carefully recorded and are now integrated into our drawings. What happens when you pull all this together? The picture unfolds on the next page...

This drawing shows the Ford Piquette Avenue Plant Business Office in 1908. The Business Office was located on the first floor of Piquette and is part of a major restoration program that the Piquette Board of Trustees is planning to launch after the COVID pandemic is under control. Henry Ford’s office is located on the second floor, directly above Accounting. 5

From the Home of the T...Amazing Discoveries at the Ford Piquette Avenue Plant!