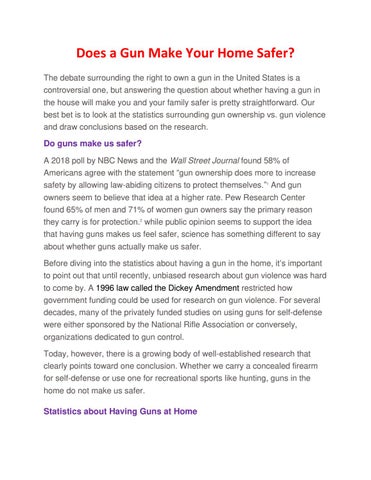 Does a Gun Make Your Home Safer? The debate surrounding the right to own a gun in the United States is a controversial one, but answering the question about whether having a gun in the house will make you and your family safer is pretty straightforward. Our best bet is to look at the statistics surrounding gun ownership vs. gun violence and draw conclusions based on the research.

Do guns make us safer? A 2018 poll by NBC News and the Wall Street Journal found 58% of Americans agree with the statement â&#x20AC;&#x153;gun ownership does more to increase safety by allowing law-abiding citizens to protect themselves.â&#x20AC;?1 And gun owners seem to believe that idea at a higher rate. Pew Research Center found 65% of men and 71% of women gun owners say the primary reason they carry is for protection.2 while public opinion seems to support the idea that having guns makes us feel safer, science has something different to say about whether guns actually make us safer. Before diving into the statistics about having a gun in the home, itâ&#x20AC;&#x2122;s important to point out that until recently, unbiased research about gun violence was hard to come by. A 1996 law called the Dickey Amendment restricted how government funding could be used for research on gun violence. For several decades, many of the privately funded studies on using guns for self-defense were either sponsored by the National Rifle Association or conversely, organizations dedicated to gun control. Today, however, there is a growing body of well-established research that clearly points toward one conclusion. Whether we carry a concealed firearm for self-defense or use one for recreational sports like hunting, guns in the home do not make us safer.

Statistics about Having Guns at Home

Statistically, having a gun in your home is more dangerous for you and your family, especially if you have young children or teens. A 2014 review in the Annals of Internal Medicine concluded having a firearm in the home, even when it’s properly stored, doubles your risk of becoming a victim of homicide and triples the risk of suicide.3 Because the majority of gun owners do not secure their weapons, children are especially at risk of gun violence in their homes. A 2015 study in the Journal of Urban Health estimated as many as 4.6 million children in America live in homes with unsecured guns.4 Experts agree that properly securing and storing guns can be an effective way to address incidents of suicide, mass shootings, and unintentional shootings among children and teenagers. Parents who are gun owners should take the extra precaution of researching the best gun safes or car gun safes to lower the risk of gun violence for their children and prevent their firearms from falling into the wrong hands.

The statistics on gun violence also apply on a broader scale. The more firearms there are in a country (whether for self-defense, concealed carry, or recreational use), the higher the incidence of gun violence. Even after controlling for other factors like income, crime levels, and demographics, many studies over the last decade confirm this conclusion.

Americans are about 5% of the world’s population but have 42% of the world’s privately owned firearms.5 A fact which David Hemmingway, professor of health policy at Harvard T.H. Chan School of Public Health, believes contributes to the higher rates of gun-related homicide in America compared with other industrialized nations. “Within the United States, a wide array of

empirical evidence indicates that more guns in a community lead to more homicide.â&#x20AC;?6 The prevalence of guns in the community means incidents like robbery and other crimes are more likely to carry the risk of gun violence. In states that have â&#x20AC;&#x153;stand your groundâ&#x20AC;? laws, Rand Corporation found even minor disagreements or physical altercations carried a greater risk of turning into violent crime. In short, gun ownership does not increase safety, and the prevalence of guns directly correlates with significantly greater risk of gunrelated homicides and suicides. While the facts surrounding the safety of having a gun in the home are clear, the choice to own a gun is more complicated for many homeowners. Be aware that the safest way to protect your home is to focus on buying the best home security system, and leave the firearms to law enforcement. If you do own guns, you can reduce the risk of unintentional shootings and other types of gun violence by storing your firearm in a gun safe or home safe. Does a Gun Make Your Home Safer?

The debate surrounding the right to own a gun in the United States is a controversial one, but answering the question about whether having a...

Does a Gun Make Your Home Safer?

The debate surrounding the right to own a gun in the United States is a controversial one, but answering the question about whether having a...