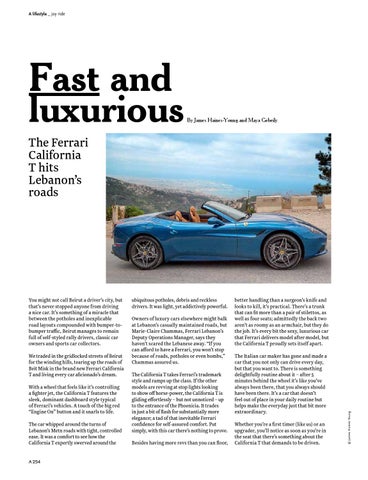 By James Haines-Young and Maya Gebeily

We traded in the gridlocked streets of Beirut for the winding hills, tearing up the roads of Beit Misk in the brand new Ferrari California T and living every car aficionado’s dream. With a wheel that feels like it’s controlling a fighter jet, the California T features the sleek, dominant dashboard style typical of Ferrari’s vehicles. A touch of the big red “Engine On” button and it snarls to life. The car whipped around the turns of Lebanon’s Metn roads with tight, controlled ease. It was a comfort to see how the California T expertly swerved around the A 254

ubiquitous potholes, debris and reckless drivers. It was light, yet addictively powerful. Owners of luxury cars elsewhere might balk at Lebanon’s casually maintained roads, but Marie-Claire Chammas, Ferrari Lebanon’s Deputy Operations Manager, says they haven’t scared the Lebanese away. “If you can afford to have a Ferrari, you won’t stop because of roads, potholes or even bombs,” Chammas assured us. The California T takes Ferrari’s trademark style and ramps up the class. If the other models are revving at stop lights looking to show off horse-power, the California T is gliding effortlessly – but not unnoticed – up to the entrance of the Phoenicia. It trades in just a bit of flash for substantially more elegance; a tad of that inevitable Ferrari confidence for self-assured comfort. Put simply, with this car there’s nothing to prove. Besides having more revs than you can floor,

better handling than a surgeon’s knife and looks to kill, it’s practical. There’s a trunk that can fit more than a pair of stilettos, as well as four seats; admittedly the back two aren’t as roomy as an armchair, but they do the job. It’s every bit the sexy, luxurious car that Ferrari delivers model after model, but the California T proudly sets itself apart. The Italian car maker has gone and made a car that you not only can drive every day, but that you want to. There is something delightfully routine about it – after 5 minutes behind the wheel it’s like you’ve always been there, that you always should have been there. It’s a car that doesn’t feel out of place in your daily routine but helps make the everyday just that bit more extraordinary. Whether you’re a first timer (like us) or an upgrader, you’ll notice as soon as you’re in the seat that there’s something about the California T that demands to be driven.

You might not call Beirut a driver’s city, but that’s never stopped anyone from driving a nice car. It’s something of a miracle that between the potholes and inexplicable road layouts compounded with bumper-tobumper traffic, Beirut manages to remain full of self-styled rally drivers, classic car owners and sports car collectors. 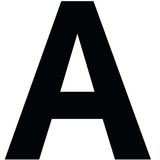 A magazine's October/ November issue is all about challenging the status quo. Along with the hottest fall trends, articles on unusual food t...

A magazine's October/ November issue is all about challenging the status quo. Along with the hottest fall trends, articles on unusual food t...