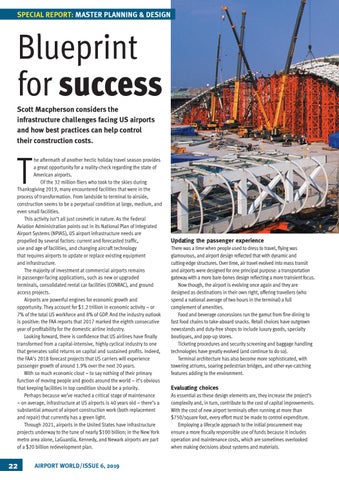 Blueprint for success Scott Macpherson considers the infrastructure challenges facing US airports and how best practices can help control their construction costs.

he aftermath of another hectic holiday travel season provides a great opportunity for a reality-check regarding the state of American airports. Of the 32 million fliers who took to the skies during Thanksgiving 2019, many encountered facilities that were in the process of transformation. From landside to terminal to airside, construction seems to be a perpetual condition at large, medium, and even small facilities. This activity isn’t all just cosmetic in nature. As the Federal Aviation Administration points out in its National Plan of Integrated Airport Systems (NPIAS), US airport infrastructure needs are propelled by several factors: current and forecasted traffic, use and age of facilities, and changing aircraft technology that requires airports to update or replace existing equipment and infrastructure. The majority of investment at commercial airports remains in passenger-facing applications, such as new or upgraded terminals, consolidated rental car facilities (CONRAC), and ground access projects. Airports are powerful engines for economic growth and opportunity. They account for $1.2 trillion in economic activity – or 7% of the total US workforce and 8% of GDP. And the industry outlook is positive: the FAA reports that 2017 marked the eighth consecutive year of profitability for the domestic airline industry. Looking forward, there is confidence that US airlines have finally transformed from a capital-intensive, highly cyclical industry to one that generates solid returns on capital and sustained profits. Indeed, the FAA’s 2018 forecast projects that US carriers will experience passenger growth of around 1.9% over the next 20 years. With so much economic clout – to say nothing of their primary function of moving people and goods around the world – it’s obvious that keeping facilities in top condition should be a priority. Perhaps because we’ve reached a critical stage of maintenance – on average, infrastructure at US airports is 40 years old – there’s a substantial amount of airport construction work (both replacement and repair) that currently has a green light. Through 2021, airports in the United States have infrastructure projects underway to the tune of nearly $100 billion; in the New York metro area alone, LaGuardia, Kennedy, and Newark airports are part of a $20 billion redevelopment plan.

Updating the passenger experience There was a time when people used to dress to travel, flying was glamourous, and airport design reflected that with dynamic and cutting-edge structures. Over time, air travel evolved into mass transit and airports were designed for one principal purpose: a transportation gateway with a more bare-bones design reflecting a more transient focus. Now though, the airport is evolving once again and they are designed as destinations in their own right, offering travellers (who spend a national average of two hours in the terminal) a full complement of amenities. Food and beverage concessions run the gamut from fine dining to fast food chains to take-aboard snacks. Retail choices have outgrown newsstands and duty-free shops to include luxury goods, specialty boutiques, and pop-up stores. Ticketing procedures and security screening and baggage handling technologies have greatly evolved (and continue to do so). Terminal architecture has also become more sophisticated, with towering atriums, soaring pedestrian bridges, and other eye-catching features adding to the environment.

Evaluating choices As essential as these design elements are, they increase the project’s complexity and, in turn, contribute to the cost of capital improvements. With the cost of new airport terminals often running at more than $750/square foot, every effort must be made to control expenditure. Employing a lifecycle approach to the initial procurement may ensure a more fiscally responsible use of funds because it includes operation and maintenance costs, which are sometimes overlooked when making decisions about systems and materials. 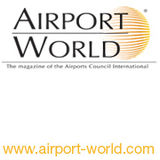