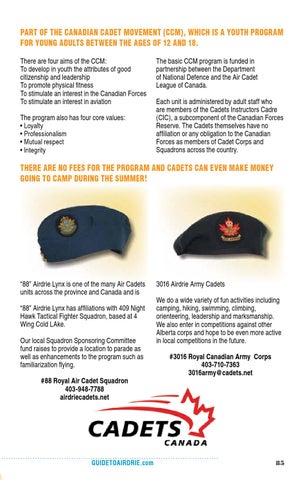 Part of the Canadian Cadet Movement (CCM), which is a youth program for young adults between the ages of 12 and 18. There are four aims of the CCM: To develop in youth the attributes of good citizenship and leadership To promote physical fitness To stimulate an interest in the Canadian Forces To stimulate an interest in aviation The program also has four core values: • Loyalty • Professionalism • Mutual respect • Integrity

The basic CCM program is funded in partnership between the Department of National Defence and the Air Cadet League of Canada. Each unit is administered by adult staff who are members of the Cadets Instructors Cadre (CIC), a subcomponent of the Canadian Forces Reserve. The Cadets themselves have no affiliation or any obligation to the Canadian Forces as members of Cadet Corps and Squadrons across the country.

There are no fees for the program and cadets can even make money going to camp during the summer!

“88” Airdrie Lynx is one of the many Air Cadets units across the province and Canada and is “88” Airdrie Lynx has affiliations with 409 Night Hawk Tactical Fighter Squadron, based at 4 Wing Cold LAke. Our local Squadron Sponsoring Committee fund raises to provide a location to parade as well as enhancements to the program such as familiarization flying. #88 Royal Air Cadet Squadron 403-948-7788 airdriecadets.net

3016 Airdrie Army Cadets We do a wide variety of fun activities including camping, hiking, swimming, climbing, orienteering, leadership and marksmanship. We also enter in competitions against other Alberta corps and hope to be even more active in local competitions in the future. #3016 Royal Canadian Army Corps 403-710-7363 3016army@cadets.net