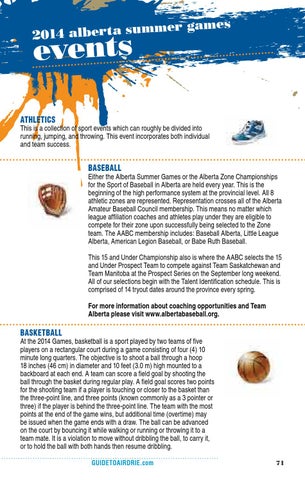 This is a collection of sport events which can roughly be divided into running, jumping, and throwing. This event incorporates both individual and team success.

Either the Alberta Summer Games or the Alberta Zone Championships for the Sport of Baseball in Alberta are held every year. This is the beginning of the high performance system at the provincial level. All 8 athletic zones are represented. Representation crosses all of the Alberta Amateur Baseball Council membership. This means no matter which league affiliation coaches and athletes play under they are eligible to compete for their zone upon successfully being selected to the Zone team. The AABC membership includes: Baseball Alberta, Little League Alberta, American Legion Baseball, or Babe Ruth Baseball. This 15 and Under Championship also is where the AABC selects the 15 and Under Prospect Team to compete against Team Saskatchewan and Team Manitoba at the Prospect Series on the September long weekend. All of our selections begin with the Talent Identification schedule. This is comprised of 14 tryout dates around the province every spring. For more information about coaching opportunities and Team Alberta please visit www.albertabaseball.org.

At the 2014 Games, basketball is a sport played by two teams of five players on a rectangular court during a game consisting of four (4) 10 minute long quarters. The objective is to shoot a ball through a hoop 18 inches (46 cm) in diameter and 10 feet (3.0 m) high mounted to a backboard at each end. A team can score a field goal by shooting the ball through the basket during regular play. A field goal scores two points for the shooting team if a player is touching or closer to the basket than the three-point line, and three points (known commonly as a 3 pointer or three) if the player is behind the three-point line. The team with the most points at the end of the game wins, but additional time (overtime) may be issued when the game ends with a draw. The ball can be advanced on the court by bouncing it while walking or running or throwing it to a team mate. It is a violation to move without dribbling the ball, to carry it, or to hold the ball with both hands then resume dribbling. guidetoairdrie.com