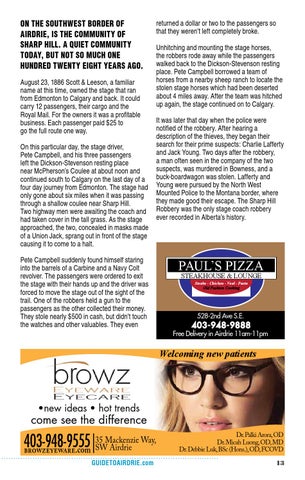 On the Southwest border of Airdrie, is the community of Sharp Hill. A quiet community today, but not so much one hundred twenty eight years ago. August 23, 1886 Scott & Leeson, a familiar name at this time, owned the stage that ran from Edmonton to Calgary and back. It could carry 12 passengers, their cargo and the Royal Mail. For the owners it was a profitable business. Each passenger paid $25 to go the full route one way. On this particular day, the stage driver, Pete Campbell, and his three passengers left the Dickson-Stevenson resting place near McPherson’s Coulee at about noon and continued south to Calgary on the last day of a four day journey from Edmonton. The stage had only gone about six miles when it was passing through a shallow coulee near Sharp Hill. Two highway men were awaiting the coach and had taken cover in the tall grass. As the stage approached, the two, concealed in masks made of a Union Jack, sprang out in front of the stage causing it to come to a halt. Pete Campbell suddenly found himself staring into the barrels of a Carbine and a Navy Colt revolver. The passengers were ordered to exit the stage with their hands up and the driver was forced to move the stage out of the sight of the trail. One of the robbers held a gun to the passengers as the other collected their money. They stole nearly $500 in cash, but didn’t touch the watches and other valuables. They even

returned a dollar or two to the passengers so that they weren’t left completely broke. Unhitching and mounting the stage horses, the robbers rode away while the passengers walked back to the Dickson-Stevenson resting place. Pete Campbell borrowed a team of horses from a nearby sheep ranch to locate the stolen stage horses which had been deserted about 4 miles away. After the team was hitched up again, the stage continued on to Calgary. It was later that day when the police were notified of the robbery. After hearing a description of the thieves, they began their search for their prime suspects: Charlie Lafferty and Jack Young. Two days after the robbery, a man often seen in the company of the two suspects, was murdered in Bowness, and a buck-boardwagon was stolen. Lafferty and Young were pursued by the North West Mounted Police to the Montana border, where they made good their escape. The Sharp Hill Robbery was the only stage coach robbery ever recorded in Alberta’s history.