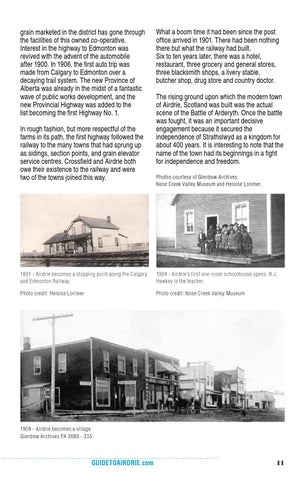 grain marketed in the district has gone through the facilities of this owned co-operative. Interest in the highway to Edmonton was revived with the advent of the automobile after 1900. In 1906, the first auto trip was made from Calgary to Edmonton over a decaying trail system. The new Province of Alberta was already in the midst of a fantastic wave of public works development, and the new Provincial Highway was added to the list becoming the first Highway No. 1. In rough fashion, but more respectful of the farms in its path, the first highway followed the railway to the many towns that had sprung up as sidings, section points, and grain elevator service centres. Crossfield and Airdrie both owe their existence to the railway and were two of the towns joined this way.

What a boom time it had been since the post office arrived in 1901. There had been nothing there but what the railway had built. Six to ten years later, there was a hotel, restaurant, three grocery and general stores, three blacksmith shops, a livery stable, butcher shop, drug store and country doctor. The rising ground upon which the modern town of Airdrie, Scotland was built was the actual scene of the Battle of Arderyth. Once the battle was fought, it was an important decisive engagement because it secured the independence of Strathslwyd as a kingdom for about 400 years. It is interesting to note that the name of the town had its beginnings in a fight for independence and freedom. Photos courtesy of Glenbow Archives, Nose Creek Valley Museum and Heloise Lorimer.

1891 - Airdrie becomes a stopping point along the Calgary and Edmonton Railway.