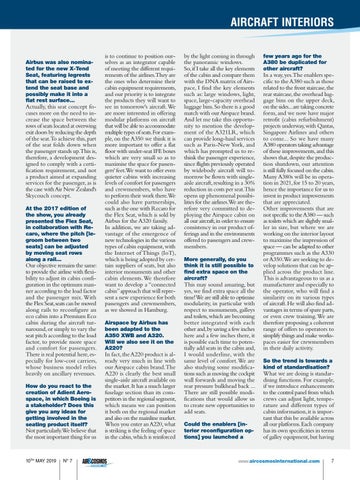 Airbus was also nominated for the new X-Tend Seat, featuring legrests that can be raised to extend the seat base and possibly make it into a flat rest surface...

Actually, this seat concept focuses more on the need to increase the space between the rows of seats located at overwing exit doors by reducing the depth of the seat.To achieve this, part of the seat folds down when the passenger stands up.This is, therefore, a development designed to comply with a certification requirement, and not a product aimed at expanding services for the passenger, as is the case with Air New Zealand&#39;s Skycouch concept. At the 2017 edition of the show, you already presented the Flex Seat, in collaboration with Recaro, where the pitch [legroom between two seats] can be adjusted by moving seat rows along a rail...

Our objective remains the same: to provide the airline with flexibility to adjust its cabin configuration in the optimum manner according to the load factor and the passenger mix. With the Flex Seat, seats can be moved along rails to reconfigure an eco cabin into a Premium Eco cabin during the aircraft turnaround, or simply to vary the seat pitch according to the load factor, to provide more space and comfort for passengers. There is real potential here, especially for low-cost carriers, whose business model relies heavily on ancillary revenues. How do you react to the creation of Adient Aerospace, in which Boeing is a stakeholder? Does this give you any ideas for getting involved in the seating product itself?

Not particularly.We believe that the most important thing for us

is to continue to position ourselves as an integrator capable of meeting the different requirements of the airlines.They are the ones who determine their cabin equipment requirements, and our priority is to integrate the products they will want to see in tomorrow&#39;s aircraft. We are more interested in offering modular platforms on aircraft that will be able to accommodate multiple types of seats. For example, on the A350 we think it is more important to offer a flat floor with under-seat IFE boxes which are very small so as to maximise the space for passengers&#39; feet.We want to offer even quieter cabins with increasing levels of comfort for passengers and crewmembers, who have to perform their work there.We could also have partnerships, such as the one with Recaro for the Flex Seat, which is sold by Airbus for the A320 family. In addition, we are taking advantage of the emergence of new technologies in the various types of cabin equipment, with the Internet of Things (IoT), which is being adopted by certain suppliers of seats, but also interior monuments and other cabin elements. We therefore want to develop a “connected cabin” approach that will represent a new experience for both passengers and crewmembers, as we showed in Hamburg. Airspace by Airbus has been adapted to the A350 XWB and A320. Will we also see it on the A220?

In fact, the A220 product is already very much in line with our Airspace cabin brand.The A220 is clearly the best small single-aisle aircraft available on the market. It has a much larger fuselage section than its competitors in the regional segment, which means we can position it both on the regional market and also on the mainline market. When you enter an A220, what is striking is the feeling of space in the cabin, which is reinforced

by the light coming in through the panoramic windows. So, if I take all the key elements of the cabin and compare them with the DNA matrix of Airspace, I find the key elements such as: large windows, light, space, large-capacity overhead luggage bins. So there is a good match with our Airspace brand. And let me take this opportunity to mention the development of the A321LR, which can provide long-haul services such as Paris-New York, and which has prompted us to rethink the passenger experience, since flights previously operated by widebody aircraft will tomorrow be flown with singleaisle aircraft, resulting in a 30% reduction in costs per seat.This opens up phenomenal possibilities for the airlines.We are therefore very committed to deploying the Airspace cabin on all our aircraft, in order to ensure consistency in our product offerings and in the environments offered to passengers and crewmembers. More generally, do you think it is still possible to find extra space on the aircraft?

This may sound amazing, but yes, we find extra space all the time! We are still able to optimise modularity, in particular with respect to monuments, galleys and toilets, which are becoming better integrated with each other and, by saving a few inches here and a few inches there, it is possible each time to potentially add seats in the cabin and, I would underline, with the same level of comfort. We are also studying some modifications such as moving the cockpit wall forwards and moving the rear pressure bulkhead back ... There are still possible modifications that would allow us to create new opportunities to add seats. Could the enablers [interior reconfiguration options] you launched a

few years ago for the A380 be duplicated for other aircraft?

In a way, yes.The enablers specific to the A380 such as those related to the front staircase, the rear staircase, the overhead luggage bins on the upper deck, on the sides... are taking concrete form, and we now have major retrofit (cabin refurbishment) projects underway, with Qantas, Singapore Airlines and others to come... So we have many A380 operators taking advantage of these improvements, and this shows that, despite the production shutdown, our attention is still fully focused on the cabin. Many A380s will be in operation in 2021, for 15 to 20 years, hence the importance for us to invest in product improvements that are appreciated. Other improvements that are not specific to the A380 — such as toilets which are slightly smaller in size, but where we are working on the interior layout to maximise the impression of space — can be adapted to other programmes such as the A330 or A350.We are seeking to develop solutions that can be applied across the product line. This is advantageous to us as a manufacturer and especially to the operator, who will find a similarity on its various types of aircraft. He will also find advantages in terms of spare parts, or even crew training. We are therefore proposing a coherent range of offers to operators to simplify things and make workspaces easier for crewmembers in their daily activity. So the trend is towards a kind of standardisation?

What we are doing is standardising functions. For example, if we introduce enhancements to the control panel from which crews can adjust light, temperature and different types of cabin information, it is important that this be available across all our platforms. Each company has its own specificities in terms of galley equipment, but having