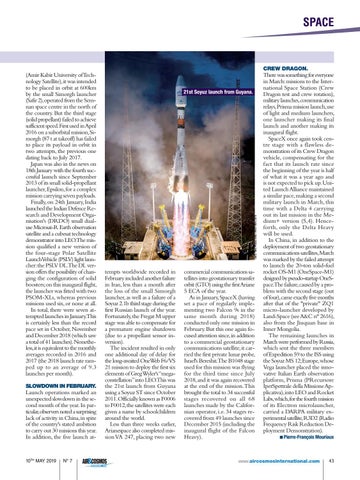 Launch operations marked an unexpected slowdown in the second month of the year. In particular, observers noted a surprising lack of activity in China, in spite of the country&#39;s stated ambition to carry out 30 missions this year. In addition, the five launch at-

(Amir Kabir University of Technology Satellite), it was intended to be placed in orbit at 600km by the small Simorgh launcher (Safir 2), operated from the Semnan space centre in the north of the country. But the third stage (solid propellant) failed to achieve sufficient speed. First used in April 2016 on a suborbital mission, Simorgh (87 t at takeoff) has failed to place its payload in orbit in two attempts, the previous one dating back to July 2017. Japan was also in the news on 18th January with the fourth successful launch since September 2013 of its small solid-propellant launcher, Epsilon, for a complex mission carrying seven payloads. Finally, on 24th January, India launched the Indian Defence Research and Development Organisation&#39;s (DRDO) small dualuse Microsat-R Earth observation satellite and a cubesat technology demonstrator into LEO.The mission qualified a new version of the four-stage Polar Satellite LaunchVehicle (PSLV) light launcher: the PSLV DL.The DL version offers the possibility of changing the configuration of solid boosters; on this inaugural flight, the launcher was fitted with two PSOM-XLs, whereas previous missions used six, or none at all. In total, there were seven attempted launches in January.This is certainly less than the record pace set in October, November and December 2018 (which saw a total of 41 launches). Nonetheless, it is equivalent to the monthly averages recorded in 2016 and 2017 (the 2018 launch rate ramped up to an average of 9.3 launches per month).

tempts worldwide recorded in February included another failure in Iran, less than a month after the loss of the small Simorgh launcher, as well as a failure of a Soyuz 2.1b third stage during the first Russian launch of the year. Fortunately, the Fregat M upper stage was able to compensate for a premature engine shutdown (due to a propellant sensor inversion). The incident resulted in only one additional day of delay for the long-awaited OneWeb F6/VS 21 mission to deploy the first six elements of Greg Wyler&#39;s “megaconstellation” into LEO.This was the 21st launch from Guyana using a Soyuz ST since October 2011. Officially known as F0006 to F0012, the satellites were each given a name by schoolchildren around the world. Less than three weeks earlier, Arianespace also completed mission VA 247, placing two new

commercial communications satellites into geostationary transfer orbit (GTO) using the first Ariane 5 ECA of the year. As in January, SpaceX (having set a pace of regularly implementing two Falcon 9s in the same month during 2018) conducted only one mission in February. But this one again focused attention since, in addition to a commercial geostationary communications satellite, it carried the first private lunar probe, Israel&#39;s Bereshit.The B1048 stage used for this mission was flying for the third time since July 2018, and it was again recovered at the end of the mission. This brought the total to 34 successful stages recovered on all 68 launches made by the Californian operator, i.e. 34 stages recovered from 49 launches since December 2015 (including the inaugural flight of the Falcon Heavy).

There was something for everyone in March: missions to the International Space Station (Crew Dragon test and crew rotation), military launches, communication relays, Prisma mission launch, use of light and medium launchers, one launcher making its final launch and another making its inaugural flight. SpaceX once again took centre stage with a flawless demonstration of its Crew Dragon vehicle, compensating for the fact that its launch rate since the beginning of the year is half of what it was a year ago and is not expected to pick up. United Launch Alliance maintained a similar pace, making a second military launch in March, this time with a Delta 4 carrying out its last mission in the Medium+ version (5,4). Henceforth, only the Delta Heavy will be used. In China, in addition to the deployment of two geostationary communications satellites, March was marked by the failed attempt to launch the 20-ton solid-fuel rocket OS-M1 (OneSpace-M1) designed by pseudo-startup OneSpace.The failure, caused by a problem with the second stage (out of four), came exactly five months after that of the &quot;private&quot; ZQ1 micro-launcher developed by Land-Space (see A&amp;C n° 2616), also from the Jiuquan base in Inner Mongolia. The remaining launches in March were performed by Russia, which sent the three members of Expedition 59 to the ISS using the Soyuz MS 12; Europe, whose Vega launcher placed the innovative Italian Earth observation platform, Prisma (PRecursore IperSpettrale della Missione Applicativa), into LEO and Rocket Labs, which, for the fourth mission of its Electron microlauncher, carried a DARPA military experimental satellite, R3D2 (Radio Frequency Risk Reduction Deployment Demonstration). ■ Pierre-François Mouriaux