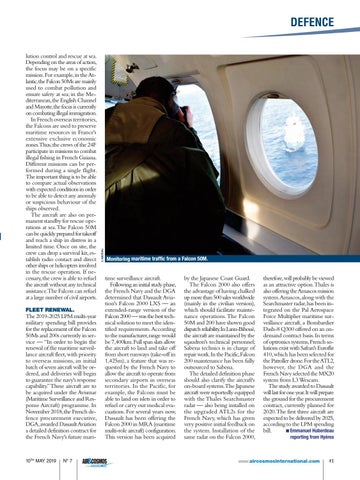 lution control and rescue at sea. Depending on the areas of action, the focus may be on a specific mission. For example, in the Atlantic, the Falcon 50Ms are mainly used to combat pollution and ensure safety at sea; in the Mediterranean, the English Channel and Mayotte, the focus is currently on combating illegal immigration. In French overseas territories, the Falcons are used to preserve maritime resources in France&#39;s extensive exclusive economic zones.Thus, the crews of the 24F participate in missions to combat illegal fishing in French Guiana. Different missions can be performed during a single flight. The important thing is to be able to compare actual observations with expected conditions in order to be able to detect any anomaly or suspicious behaviour of the ships observed. The aircraft are also on permanent standby for rescue operations at sea. The Falcon 50M can be quickly prepared for takeoff and reach a ship in distress in a limited time. Once on site, the crew can drop a survival kit, establish radio contact and direct other ships or helicopters involved in the rescue operation. If necessary, the crew is able to refuel the aircraft without any technical assistance.The Falcon can refuel at a large number of civil airports. FLEET RENEWAL.

The 2019-2025 LPM multi-year military spending bill provides for the replacement of the Falcon 50Ms and 200s currently in service — “In order to begin the renewal of the maritime surveillance aircraft fleet, with priority to overseas missions, an initial batch of seven aircraft will be ordered, and deliveries will begin to guarantee the navy&#39;s response capability.” These aircraft are to be acquired under the Avismar (Maritime Surveillance and Response Aircraft) programme. In November 2018, the French defence procurement executive, DGA, awarded Dassault Aviation a detailed definition contract for the French Navy&#39;s future mari-

time surveillance aircraft. Following an initial study phase, the French Navy and the DGA determined that Dassault Aviation&#39;s Falcon 2000 LXS — an extended-range version of the Falcon 2000 — was the best technical solution to meet the identified requirements. According to the manufacturer, range would be 7,400km. Full span slats allow the aircraft to land and take off from short runways (take-off in 1,425m), a feature that was requested by the French Navy to allow the aircraft to operate from secondary airports in overseas territories. In the Pacific, for example, the Falcons must be able to land on islets in order to refuel or carry out medical evacuations. For several years now, Dassault has been offering the Falcon 2000 in MRA (maritime multi-role aircraft) configuration. This version has been acquired

by the Japanese Coast Guard. The Falcon 2000 also offers the advantage of having chalked up more than 500 sales worldwide (mainly in the civilian version), which should facilitate maintenance operations. The Falcon 50M and 200 have shown good dispatch reliability. In Lann-Bihoué, the aircraft are maintained by the sqaudron&#39;s technical personnel; Sabena technics is in charge of repair work. In the Pacific, Falcon 200 maintenance has been fully outsourced to Sabena. The detailed definition phase should also clarify the aircraft&#39;s on-board systems.The Japanese aircraft were reportedly equipped with the Thales Searchmaster radar — also being installed on the upgraded ATL2s for the French Navy, which has given very positive initial feedback on the system. Installation of the same radar on the Falcon 2000,

therefore, will probably be viewed as an attractive option.Thales is also offering the Amascos mission system.Amascos, along with the Searchmaster radar, has been integrated on the Pal Aerospace Force Multiplier maritime surveillance aircraft, a Bombardier Dash-8 Q300 offered on an ondemand contract basis. In terms of optronics systems, French solutions exist with Safran&#39;s Euroflir 410, which has been selected for the Patroller drone. For the ATL2, however, the DGA and the French Navy selected the MX20 system from L3 Wescam. The study awarded to Dassault will last for one year. It will prepare the ground for the procurement contract, currently planned for 2020.The first three aircraft are expected to be delivered by 2025, according to the LPM spending ■ Emmanuel Huberdeau bill. reporting from Hyères