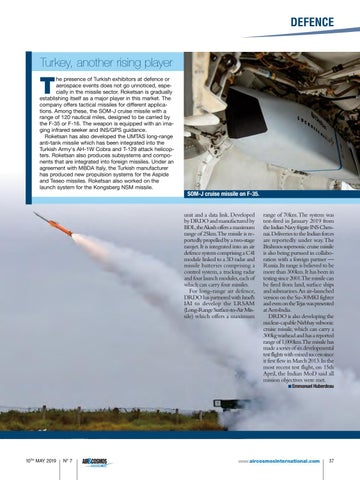 Turkey, another rising player he presence of Turkish exhibitors at defence or aerospace events does not go unnoticed, especially in the missile sector. Roketsan is gradually establishing itself as a major player in this market. The company offers tactical missiles for different applications. Among these, the SOM-J cruise missile with a range of 120 nautical miles, designed to be carried by the F-35 or F-16. The weapon is equipped with an imaging infrared seeker and INS/GPS guidance. Roketsan has also developed the UMTAS long-range anti-tank missile which has been integrated into the Turkish Army&#39;s AH-1W Cobra and T-129 attack helicopters. Roketsan also produces subsystems and components that are integrated into foreign missiles. Under an agreement with MBDA Italy, the Turkish manufacturer has produced new propulsion systems for the Aspide and Teseo missiles. Roketsan also worked on the launch system for the Kongsberg NSM missile.

unit and a data link. Developed by DRDO and manufactured by BDL,the Akash offers a maximum range of 25km.The missile is reportedly propelled by a two-stage ramjet. It is integrated into an air defence system comprising a C4I module linked to a 3D radar and missile batteries comprising a control system, a tracking radar and four launch modules, each of which can carry four missiles. For long-range air defence, DRDO has partnered with Israel&#39;s IAI to develop the LRSAM (Long-Range Surface-to-Air Missile) which offers a maximum

range of 70km. The system was test-fired in January 2019 from the Indian Navy frigate INS Chennai. Deliveries to the Indian forces are reportedly under way. The Brahmos supersonic cruise missile is also being pursued in collaboration with a foreign partner — Russia. Its range is believed to be more than 300km. It has been in testing since 2001.The missile can be fired from land, surface ships and submarines.An air-launched version on the Su-30MKI fighter and even on theTejas was presented at AeroIndia. DRDO is also developing the nuclear-capable Nirbhay subsonic cruise missile, which can carry a 300kg warhead and has a reported range of 1,000km.The missile has made a series of six developmental test flights with mixed success since it first flew in March 2013. In the most recent test flight, on 15th April, the Indian MoD said all mission objectives were met. ■ Emmanuel Huberdeau