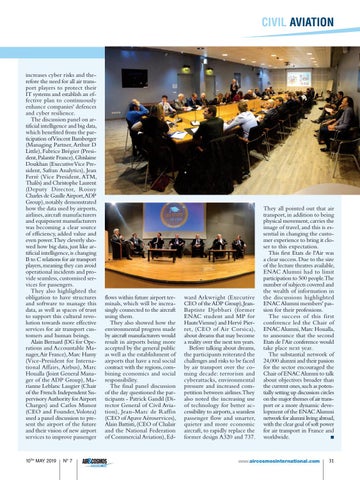 flows within future airport terminals, which will be increasingly connected to the aircraft using them. They also showed how the environmental progress made by aircraft manufacturers would result in airports being more accepted by the general public as well as the establishment of airports that have a real social contract with the regions, combining economics and social responsibility. The final panel discussion of the day questioned the participants - Patrick Gandil (Director General of Civil Aviation), Jean-Marc de Raffin (CEO of Apave Aéroservices), Alain Battisti, (CEO of Chalair and the National Federation of Commercial Aviation), Ed-

ward Arkwright (Executive CEO of the ADP Group), JeanBaptiste Djebbari (former ENAC student and MP for Haute Vienne) and Hervé Pierret, (CEO of Air Corsica), about dreams that may become a reality over the next ten years. Before talking about dreams, the participants reiterated the challenges and risks to be faced by air transport over the coming decade: terrorism and cyberattacks, environmental pressure and increased competition between airlines.They also noted the increasing use of technology for better accessibility to airports, a seamless passenger flow and smarter, quieter and more economic aircraft, to rapidly replace the former design A320 and 737.

They all pointed out that air transport, in addition to being physical movement, carries the image of travel, and this is essential in changing the customer experience to bring it closer to this expectation. This first Etats de l&#39;Air was a clear success. Due to the size of the lecture theatres available, ENAC Alumni had to limit participation to 500 people.The number of subjects covered and the wealth of information in the discussions highlighted ENAC Alumni members&#39; passion for their professions. The success of this first conference led the Chair of ENAC Alumni, Marc Houalla, to announce that the second Etats de l’Air conference would take place next year. The substantial network of 24,000 alumni and their passion for the sector encouraged the Chair of ENAC Alumni to talk about objectives broader than the current ones, such as potentially setting up discussion circles on the major themes of air transport or a more dynamic development of the ENAC Alumni network for alumni living abroad, with the clear goal of soft power for air transport in France and ■ worldwide.