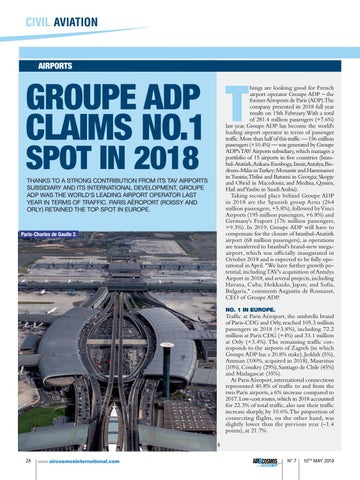 hings are looking good for French airport operator Groupe ADP – the former Aéroports de Paris (ADP).The company presented its 2018 full year results on 15th February. With a total of 281.4 million passengers (+7.6%) last year, Groupe ADP has become the world&#39;s leading airport operator in terms of passenger traffic. More than half of this traffic — 156 million passengers (+10.4%) — was generated by Groupe ADP&#39;s TAV Airports subsidiary, which manages a portfolio of 15 airports in five countries (Istanbul-Atatürk,Ankara-Esenboga, Izmir,Antalya, Bodrum-Milas in Turkey; Monastir and Hammamet in Tunisia;Tbilisi and Batumi in Georgia; Skopje and Ohrid in Macedonia; and Medina, Qassim, Hail and Yanbu in Saudi Arabia). Taking second place behind Groupe ADP in 2018 are the Spanish group Aena (264 million passengers, +5.8%), followed by Vinci Airports (195 million passengers, +6.8%) and Germany&#39;s Fraport (176 million passengers, +9.3%). In 2019, Groupe ADP will have to compensate for the closure of Istanbul-Atatürk airport (68 million passengers), as operations are transferred to Istanbul&#39;s brand-new megaairport, which was officially inaugurated in October 2018 and is expected to be fully operational in April. &quot;We have further growth potential, including TAV&#39;s acquisition of Antalya Airport in 2018, and several projects, including Havana, Cuba; Hokkaido, Japan; and Sofia, Bulgaria,&quot; comments Augustin de Romanet, CEO of Groupe ADP.

Thanks To a sTrong conTribuTion from iTs TaV airporTs subsidiary and iTs inTernaTional deVelopmenT, groupe adp was The world&#39;s leading airporT operaTor lasT year in Terms of Traffic. paris aéroporT (roissy and orly) reTained The Top spoT in europe.