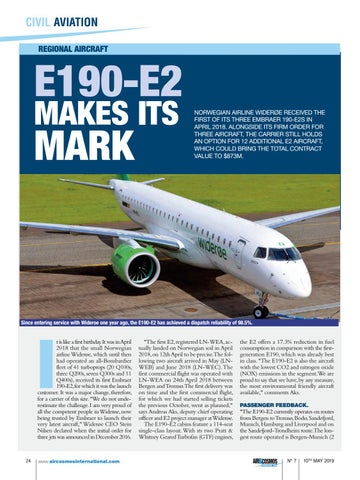 NorwegiaN airliNe widerøe received the first of its three embraer 190-e2s iN april 2018. aloNgside its firm order for three aircraft, the carrier still holds aN optioN for 12 additioNal e2 aircraft, which could briNg the total coNtract value to $873m.

Since entering service with Wideroe one year ago, the E190-E2 has achieved a dispatch reliability of 98.5%.

t is like a first birthday. It was in April 2018 that the small Norwegian airline Widerøe, which until then had operated an all-Bombardier fleet of 41 turboprops (20 Q100s, three Q200s, seven Q300s and 11 Q400s), received its first Embraer 190-E2, for which it was the launch customer. It was a major change, therefore, for a carrier of this size. &quot;We do not underestimate the challenge. I am very proud of all the competent people in Widerøe, now being trusted by Embraer to launch their very latest aircraft,&quot; Widerøe CEO Stein Nilsen declared when the initial order for three jets was announced in December 2016.

&quot;The first E2, registered LN-WEA, actually landed on Norwegian soil in April 2018, on 12th April to be precise.The following two aircraft arrived in May (LNWEB) and June 2018 (LN-WEC). The first commercial flight was operated with LN-WEA on 24th April 2018 between Bergen and Tromsø.The first delivery was on time and the first commercial flight, for which we had started selling tickets the previous October, went as planned,&quot; says Andreas Aks, deputy chief operating officer and E2 project manager at Widerøe. The E190-E2 cabins feature a 114-seat single-class layout. With its two Pratt &amp; Whitney Geared Turbofan (GTF) engines,

the E2 offers a 17.3% reduction in fuel consumption in comparison with the firstgeneration E190, which was already best in class. &quot;The E190-E2 is also the aircraft with the lowest CO2 and nitrogen oxide (NOX) emissions in the segment.We are proud to say that we have, by any measure, the most environmental friendly aircraft available,&quot; comments Aks. PASSENGER FEEDBACK.

&quot;The E190-E2 currently operates on routes from Bergen to Tromsø, Bodø, Sandefjord, Munich, Hamburg and Liverpool and on the Sandefjord-Trondheim route.The longest route operated is Bergen-Munich (2