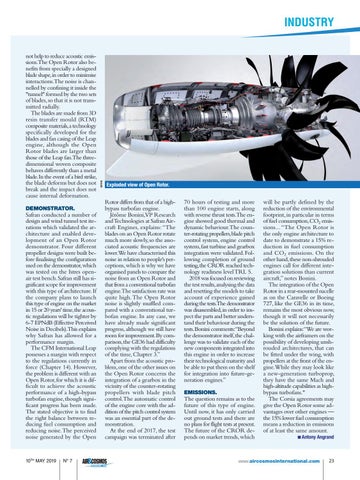 not help to reduce acoustic emissions.The Open Rotor also benefits from specially a designed blade shape, in order to minimise interactions.The noise is channelled by confining it inside the &quot;tunnel&quot; formed by the two sets of blades, so that it is not transmitted radially. The blades are made from 3D resin transfer mould (RTM) composite materials, a technology specifically developed for the blades and fan casing of the Leap engine, although the Open Rotor blades are larger than those of the Leap fan.The threedimensional woven composite behaves differently than a metal blade. In the event of a bird strike, the blade deforms but does not break and the impact does not cause internal deformation. DEMONSTRATOR.

Safran conducted a number of design and wind tunnel test iterations which validated the architecture and enabled development of an Open Rotor demonstrator. Four different propeller designs were built before finalising the configuration used on the demonstrator, which was tested on the Istres openair test bench. Safran still has significant scope for improvement with this type of architecture. If the company plans to launch this type of engine on the market in 15 or 20 years&#39; time, the acoustic regulations will be tighter by 6-7 EPNdB (Effective Perceived Noise in Decibels).This explains why Safran has allowed for a performance margin. The CFM International Leap possesses a margin with respect to the regulations currently in force (Chapter 14). However, the problem is different with an Open Rotor, for which it is difficult to achieve the acoustic performance of a high-bypass turbofan engine, though significant progress has been made. The stated objective is to find the right balance between reducing fuel consumption and reducing noise. The perceived noise generated by the Open

Rotor differs from that of a highbypass turbofan engine. Jérôme Bonini,VP Research and Technologies at Safran Aircraft Engines, explains: “The blades on an Open Rotor rotate much more slowly, so the associated acoustic frequencies are lower.We have characterised this noise in relation to people&#39;s perceptions, which is why we have organised panels to compare the noise from an Open Rotor and that from a conventional turbofan engine.The satisfaction rate was quite high. The Open Rotor noise is slightly muffled compared with a conventional turbofan engine. In any case, we have already made significant progress, although we still have room for improvement. By comparison, the GE36 had difficulty complying with the regulations of the time, Chapter 3.” Apart from the acoustic problem, one of the other issues on the Open Rotor concerns the integration of a gearbox in the vicinity of the counter-rotating propellers with blade pitch control.The automatic control of the engine core with the addition of the pitch control system was an essential part of the demonstration. At the end of 2017, the test campaign was terminated after

70 hours of testing and more than 100 engine starts, along with reverse thrust tests.The engine showed good thermal and dynamic behaviour.The counter-rotating propellers, blade pitch control system, engine control system, fast turbine and gearbox integration were validated. Following completion of ground testing, the CROR reached technology readiness level TRL 5. 2018 was focused on reviewing the test results, analysing the data and resetting the models to take account of experience gained during the tests.The demonstrator was disassembled, in order to inspect the parts and better understand their behaviour during the tests. Bonini comments:“Beyond the demonstrator itself, the challenge was to validate each of the new components integrated into this engine in order to increase their technological maturity and be able to put them on the shelf for integration into future-generation engines.” EMISSIONS.

The question remains as to the future of this type of engine. Until now, it has only carried out ground tests and there are no plans for flight tests at present. The future of the CROR depends on market trends, which

will be partly defined by the reduction of the environmental footprint, in particular in terms of fuel consumption, CO2 emissions... “The Open Rotor is the only engine architecture to date to demonstrate a 15% reduction in fuel consumption and CO 2 emissions. On the other hand, these non-shrouded engines call for different integration solutions than current aircraft,” notes Bonini. The integration of the Open Rotor in a rear-mounted nacelle as on the Caravelle or Boeing 727, like the GE36 in its time, remains the most obvious now, though it will not necessarily be the solution of the future. Bonini explains:“We are working with the airframers on the possibility of developing unshrouded architectures, that can be fitted under the wing, with propellers at the front of the engine.While they may look like a new-generation turboprop, they have the same Mach and high-altitude capabilities as highbypass turbofans.&quot; The Corsia agreements may give the Open Rotor some advantages over other engines — the 15% lower fuel consumption means a reduction in emissions of at least the same amount. ■ Antony Angrand