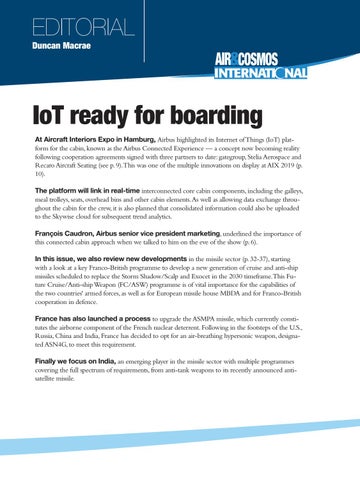 IoT ready for boarding At Aircraft Interiors Expo in Hamburg, Airbus highlighted its Internet of Things (IoT) platform for the cabin, known as the Airbus Connected Experience â&amp;#x20AC;&amp;#x201D; a concept now becoming reality following cooperation agreements signed with three partners to date: gategroup, Stelia Aerospace and Recaro Aircraft Seating (see p. 9).This was one of the multiple innovations on display at AIX 2019 (p. 10). The platform will link in real-time interconnected core cabin components, including the galleys, meal trolleys, seats, overhead bins and other cabin elements. As well as allowing data exchange throughout the cabin for the crew, it is also planned that consolidated information could also be uploaded to the Skywise cloud for subsequent trend analytics. FranĂ§ois Caudron, Airbus senior vice president marketing, underlined the importance of this connected cabin approach when we talked to him on the eve of the show (p. 6). In this issue, we also review new developments in the missile sector (p. 32-37), starting with a look at a key Franco-British programme to develop a new generation of cruise and anti-ship missiles scheduled to replace the Storm Shadow/Scalp and Exocet in the 2030 timeframe.This Future Cruise/Anti-ship Weapon (FC/ASW) programme is of vital importance for the capabilities of the two countries&#39; armed forces, as well as for European missile house MBDA and for Franco-British cooperation in defence. France has also launched a process to upgrade the ASMPA missile, which currently constitutes the airborne component of the French nuclear deterrent. Following in the footsteps of the U.S., Russia, China and India, France has decided to opt for an air-breathing hypersonic weapon, designated ASN4G, to meet this requirement. Finally we focus on India, an emerging player in the missile sector with multiple programmes covering the full spectrum of requirements, from anti-tank weapons to its recently announced antisatellite missile.