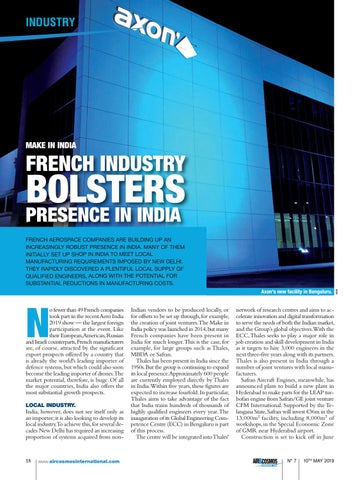 o fewer than 49 French companies took part in the recent Aero India 2019 show — the largest foreign participation at the event. Like their European,American, Russian and Israeli counterparts, French manufacturers are, of course, attracted by the significant export prospects offered by a country that is already the world&#39;s leading importer of defence systems, but which could also soon become the leading importer of drones.The market potential, therefore, is huge. Of all the major countries, India also offers the most substantial growth prospects.

India, however, does not see itself only as an importer; it is also looking to develop its local industry.To achieve this, for several decades New Delhi has required an increasing proportion of systems acquired from non-

Indian vendors to be produced locally, or for offsets to be set up through, for example, the creation of joint ventures.The Make in India policy was launched in 2014, but many French companies have been present in India for much longer. This is the case, for example, for large groups such as Thales, MBDA or Safran. Thales has been present in India since the 1950s. But the group is continuing to expand its local presence.Approximately 600 people are currently employed directly by Thales in India.Within five years, these figures are expected to increase fourfold. In particular, Thales aims to take advantage of the fact that India trains hundreds of thousands of highly qualified engineers every year. The inauguration of its Global Engineering Competence Centre (ECC) in Bengaluru is part of this process. The centre will be integrated into Thales&#39;

network of research centres and aims to accelerate innovation and digital transformation to serve the needs of both the Indian market, and the Group’s global objectives.With the ECC, Thales seeks to play a major role in job creation and skill development in India as it targets to hire 3,000 engineers in the next three-five years along with its partners. Thales is also present in India through a number of joint ventures with local manufacturers. Safran Aircraft Engines, meanwhile, has announced plans to build a new plant in Hyderabad to make parts for the LEAP turbofan engine from Safran/GE joint venture CFM International. Supported by the Telangana State, Safran will invest €36m in the 13,000m2 facility, including 8,000m2 of workshops, in the Special Economic Zone of GMR near Hyderabad airport. Construction is set to kick off in June

FRENCH AEROSPACE COMPANIES ARE BUILDING UP AN INCREASINGLY ROBUST PRESENCE IN INDIA. MANY OF THEM INITIALLY SET UP SHOP IN INDIA TO MEET LOCAL MANUFACTURING REQUIREMENTS IMPOSED BY NEW DELHI. THEY RAPIDLY DISCOVERED A PLENTIFUL LOCAL SUPPLY OF QUALIFIED ENGINEERS, ALONG WITH THE POTENTIAL FOR SUBSTANTIAL REDUCTIONS IN MANUFACTURING COSTS.