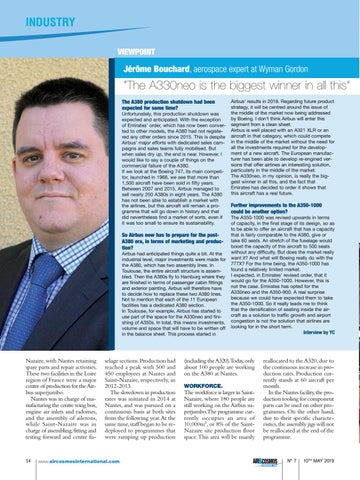 “The A330neo is the biggest winner in all this“ The A380 production shutdown had been expected for some time? unfortunately, this production shutdown was expected and anticipated. with the exception of emirates&#39; order, which has now been converted to other models, the a380 had not registered any other orders since 2015. this is despite airbus&#39; major efforts with dedicated sales campaigns and sales teams fully mobilised. but when sales dry up, the end is near. however, I would like to say a couple of things on the commercial failure of the a380. If we look at the boeing 747, its main competitor, launched in 1968, we see that more than 1,500 aircraft have been sold in fifty years. between 2007 and 2015, airbus managed to sell nearly 250 a380s in eight years. the a380 has not been able to establish a market with the airlines, but this aircraft will remain a programme that will go down in history and that did nevertheless find a market of sorts, even if it was too small to ensure its sustainability.

So Airbus now has to prepare for the postA380 era, in terms of marketing and production? airbus had anticipated things quite a bit. at the industrial level, major investments were made for the a380, which has two assembly lines. In toulouse, the entire aircraft structure is assembled. then the a380s fly to hamburg where they are finished in terms of passenger cabin fittings and exterior painting. airbus will therefore have to decide how to replace these two a380 lines. not to mention that each of the 11 european facilities has a dedicated a380 section. In toulouse, for example, airbus has started to use part of the space for the a330neo and finishing of a350s. In total, this means investments, volume and space that will have to be written off in the balance sheet. this process started in

Nazaire, with Nantes retaining spare parts and repair activities. These two facilities in the Loire region of France were a major centre of production for the Airbus superjumbo. Nantes was in charge of manufacturing the centre wing box, engine air inlets and radomes, and the assembly of ailerons, while Saint-Nazaire was in charge of assembling, fitting and testing forward and centre fu-

selage sections. Production had reached a peak with 500 and 450 employees at Nantes and Saint-Nazaire, respectively, in 2012-2013. The slowdown in production rates was initiated in 2014 at Nantes, and was pursued on a continuous basis at both sites from the following year. At the same time, staff began to be redeployed to programmes that were ramping up production

airbus&#39; results in 2018. regarding future product strategy, it will be centred around the issue of the middle of the market now being addressed by boeing. I don&#39;t think airbus will enter this segment from a clean sheet. airbus is well placed with an a321 Xlr or an aircraft in that category, which could compete in the middle of the market without the need for all the investments required for the development of a new aircraft. the european manufacturer has been able to develop re-engined versions that offer airlines an interesting solution, particularly in the middle of the market. the a330neo, in my opinion, is really the biggest winner in all this, and the fact that emirates has decided to order it shows that this aircraft has a real future.

Further improvements to the A350-1000 could be another option? the a350-1000 was revised upwards in terms of capacity, in the final stage of its design, so as to be able to offer an aircraft that has a capacity that is fairly comparable to the a380, give or take 60 seats. an stretch of the fuselage would boost the capacity of this aircraft to 500 seats without any difficulty. but does the market really want it? and what will boeing really do with the 777X? for the time being, the a350-1000 has found a relatively limited market. I expected, in emirates&#39; revised order, that it would go for the a350-1000. however, this is not the case. emirates has opted for the a330neo and the a350-900. a real surprise because we could have expected them to take the a350-1000. so it really leads me to think that the densification of seating inside the aircraft as a solution to traffic growth and airport congestion is not the solution that airlines are looking for in the short term.

The workforce is larger in SaintNazaire, where 180 people are still working on the Airbus superjumbo.The programme currently occupies an area of 10,000m², or 8% of the SaintNazaire site production floor space. This area will be mainly

reallocated to the A320, due to the continuous increase in production rates. Production currently stands at 60 aircraft per month. In the Nantes facility, the production tooling for component parts can be used on other programmes. On the other hand, due to their specific characteristics, the assembly jigs will not be reallocated at the end of the programme.