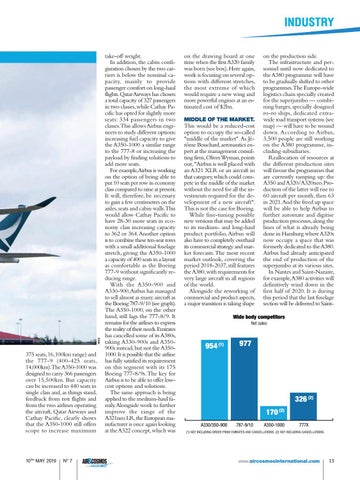 take-off weight. In addition, the cabin configuration chosen by the two carriers is below the nominal capacity, mainly to provide passenger comfort on long-haul flights. Qatar Airways has chosen a total capacity of 327 passengers in two classes, while Cathay Pacific has opted for slightly more seats: 334 passengers in two classes.This allows Airbus engineers to study different options: increasing fuel capacity to give the A350-1000 a similar range to the 777-8 or increasing the payload by finding solutions to add more seats. For example,Airbus is working on the option of being able to put 10 seats per row in economy class compared to nine at present. It will, therefore, be necessary to gain a few centimetres on the aisles, seats and cabin walls.This would allow Cathay Pacific to have 28-30 more seats in economy class increasing capacity to 362 or 364. Another option is to combine these ten-seat rows with a small additional fuselage stretch, giving the A350-1000 a capacity of 400 seats in a layout as comfortable as the Boeing 777-9 without significantly reducing range. With the A350-900 and A330-900,Airbus has managed to sell almost as many aircraft as the Boeing 787-9/10 (see graph). The A350-1000, on the other hand, still lags the 777-8/9. It remains for the airlines to express the reality of their needs. Emirates has cancelled some of its A380s, taking A330-900s and A350900s instead, but not the A3501000. It is possible that the airline has fully satisfied its requirement on this segment with its 175 Boeing 777-8/9s. The key for Airbus is to be able to offer lowcost options and solutions. The same approach is being applied to the medium-haul family.Alongside work to further improve the range of the A321neo LR, the European manufacturer is once again looking at the A322 concept, which was

on the drawing board at one time when the first A320 family R was born (see box). Here again, work is focusing on several options with different stretches, the most extreme of which would require a new wing and more powerful engines at an estimated cost of $2bn. MIDDLE OF THE MARKET.

This would be a reduced-cost option to occupy the so-called &quot;middle of the market&quot;. As Jérôme Bouchard, aeronautics expert at the management consulting firm, Oliver Wyman, points out, &quot;Airbus is well placed with an A321 XLR or an aircraft in that category, which could compete in the middle of the market without the need for all the investments required for the development of a new aircraft&quot;. This is not the case for Boeing. While fine-tuning possible new versions that may be added to its medium- and long-haul product portfolio, Airbus will also have to completely overhaul its commercial strategy and market forecasts. The most recent market outlook, covering the period 2018-2037, still features the A380, with requirements for very large aircraft in all regions of the world. Alongside the reworking of commercial and product aspects, a major transition is taking shape

on the production side. The infrastructure and personnel until now dedicated to the A380 programme will have to be gradually shifted to other programmes.The Europe-wide logistics chain specially created for the superjumbo — combining barges, specially designed ro-ro ships, dedicated extrawide road transport systems (see map) — will have to be wound down. According to Airbus, 3,500 people are still working on the A380 programme, including subsidiaries. Reallocation of resources at the different production sites will favour the programmes that are currently ramping up: the A350 and A320/A320neo. Production of the latter will rise to 60 aircraft per month, then 63 in 2021.And the freed up space will be able to help Airbus to further automate and digitise production processes, along the lines of what is already being done in Hamburg where A320s now occupy a space that was formerly dedicated to the A380. Airbus had already anticipated the end of production of the superjumbo at its various sites. In Nantes and Saint-Nazaire, for example,A380 activities will definitively wind down in the first half of 2020. It is during this period that the last fuselage section will be delivered to Saint-