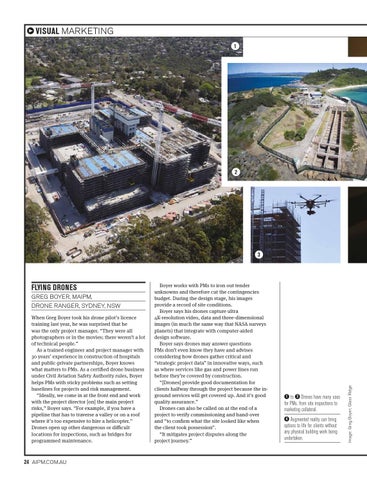 FLYING DRONES GREG BOYER, MAIPM, DRONE RANGER, SYDNEY, NSW When Greg Boyer took his drone pilot’s licence training last year, he was surprised that he was the only project manager. “They were all photographers or in the movies; there weren’t a lot of technical people.” As a trained engineer and project manager with 30 years’ experience in construction of hospitals and public-private partnerships, Boyer knows what matters to PMs. As a certified drone business under Civil Aviation Safety Authority rules, Boyer helps PMs with sticky problems such as setting baselines for projects and risk management. “Ideally, we come in at the front end and work with the project director [on] the main project risks,” Boyer says. “For example, if you have a pipeline that has to traverse a valley or on a roof where it’s too expensive to hire a helicopter.” Drones open up other dangerous or difficult locations for inspections, such as bridges for programmed maintenance.

Boyer works with PMs to iron out tender unknowns and therefore cut the contingencies budget. During the design stage, his images provide a record of site conditions. Boyer says his drones capture ultra 4K-resolution video, data and three-dimensional images (in much the same way that NASA surveys planets) that integrate with computer-aided design software. Boyer says drones may answer questions PMs don’t even know they have and advises considering how drones gather critical and “strategic project data” in innovative ways, such as where services like gas and power lines run before they’re covered by construction. “[Drones] provide good documentation for clients halfway through the project because the inground services will get covered up. And it’s good quality assurance.” Drones can also be called on at the end of a project to verify commissioning and hand-over and “to confirm what the site looked like when the client took possession”. “It mitigates project disputes along the project journey.”

1 to 3 Drones have many uses for PMs, from site inspections to marketing collateral. 4 Augmented reality can bring options to life for clients without any physical building work being undertaken. The magazine for the Australian Institute of Project Management

The magazine for the Australian Institute of Project Management