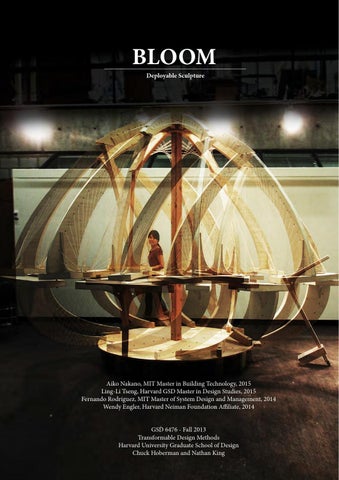 The Bloom is a childhood fort for adults that transforms from sculpture to provide a semi-private space within the public environment. Motivated by our desire to create a playful object for children and adults alike that reflects the individual’s obsession with rotation1, we created an interactive human-scale toy based on Chuck Hoberman’s wheel. The Hoberman wheel follows a simple geometric logic, where the vertical geometries can be modified as long as the joint locations are maintained relative to one another in the horizontal direction. This presented a design opportunity to add curvature to the linkages and thus create an enclosed space when the Bloom is opened. Our interactive pavilion blooms open like a budding tulip from plan view and can be deployed by one person. Once opened, friends and families are invited to share stories and dine with each other using the counter. The smooth rotation is realized by the hollow and lightweight construction of the linkages supported by the solid top and bottom structures coupled with the robust joint assemblies. The linkages and top “flower” are complemented with laced awning to provide visual protection. The wooden construction achieves the toy-like appearance as well as organic texture that resonates with the foliage and nature of the Bloom’s intended site.

Design Processes and Lessons Learned Due to the scale and our desire to build a structure that people can go in and interact with, we quickly turned to making full-scale models to test different design options for the robustness of material assemblies as well as stability of joint connections once we verified the geometric feasibility of our modified Hoberman wheel. Each part had two to three iterations to arrive at the final design.

1. Evolution of the Bloomâ&amp;#x20AC;&amp;#x2122;s geometry from the Hoberman wheel The geometric construction of the Hoberman wheel depends on the relative locations of the joints. As shown in the diagrams to the right, the distance between each joint on the inner and outer circles (D) must be the same and the radius of the inner circle needs be half the size of the outer circle (Dâ&amp;#x20AC;&amp;#x2122;). In addition, for a smooth rotation, the joints must stay on the same horizontal plane as the linkages swing around. As long as these rules are followed, the shape of the linkages can be modified. Thus, we added height to the top and bottom linkages and removed extraneous braces between joints in the inner circle. The ability to add different curvatures for top and bottom linkages allowed us to design counters at waist-level.

2. Testing geometry and laced surfaces: two scale models We made two scale models: the first one with only a third of the assemblies to test the geometry of the wheel and the second one with all components to help visualize the transformation from closed to open stages as well as to experiment with laced surfaces. The first model is a mock-up of the actual construction methods and contemplated the single and split-arm designs for the top linkages. The second study model uses the split-arm design to explore different lacing of the surfaces for privacy. Furthermore, the testing process helped us to identify where the structure is most stressed, namely the connections between the horizontal and vertical components of each linkage, the pivot points where the linkages and top/bottom supports meet, as well as the joint connection between the top support and the column. These lessons guided our design explorations to build a structurally-sound structure.

3. First full-scale model: Testing material and linkage construction methods We made a first full-scale model with sanded pine plywood to test the construction method for one linkage assembly (top and bottom linkages attached to the top and bottom supports). Both the single-arm (two sheets of plywood glued together) and the split-arm linkages (bottom images in step 2) were tested, but neither structure was strong enough to resist bending moment in the lateral direction. The long vertical arm swung side-by-side and hence the top linkage pulled the bottom linkage upwards and downwards as the assembly was rotated. For the next test, we decided to switch to hardwood plywood for rigidity as well as add structural supports to resist lateral moment. We decided to move forward with the single-arm design as it allows for more consistent construction and reliable performance, though options for surface lacing is dramatically reduced. 4. Joint assembly test: Wood block thickness and fastener assembly A mock-up joint test (top left) revealed that the nut between two wood blocks relieved the compression force between them and thus made rotation smoother. In addition, the lock washers acted as a spring to keep the bolt assembly securely fastened throughout numerous rotation test. The middle and right images below show the final assembly with four washers, one on each side of the wood blocks, a nut in between the blocks, as well as a lock washer and a nut at the end to secure the assembly. Each joint connection has the same assembly. Furthermore, a quick test with the previous full-scale model in step 3 helped us identify that the wood blocks must be at least 2 inches thick for a planar rotation. We learned that the robust joint assembly is as important as the geometric construction. The keys for successful wheel rotation are the accuracy of the hole locations and tight hole size tolerance, as well as the straightness of these connections. 5. Second full-scale linkage models: lightweight and torsion-resistant

construction In step 3, we’ve identified that the vertical linkage design must be improved to withstand lateral moment, and yet the linkages must be light enough so that the column can support all the weight as well as to allow for an effortless rotation by a single person. We changed the material to ¼” hardwood plywood, which was lighter and stronger than our previous 3/8” pine plywood. Two sheets of the new plywood were glued together as was done before, but this structure was still flimsy. Instead of adding extra thickness and weight, we came up with a hollow construction method. The slender pieces on the perimeter are slotted to follow the contour of the linkage curvatures, and the short horizontal pieces act like I-beams to provide additional support to withstand bending in the lateral direction. The horizontal linkage components were constructed the same way as the vertical parts. The vertical linkage components have notches to match the square holes in the middle of the horizontal counter tables. The brackets were then attached on both sides between the vertical and horizontal parts to further strengthen the connection and thus eliminate lateral moment. The assembled shape of the linkages was inspired by the shape of animal vertebrate2 to provide maximum strength with minimum materials. As discovered in step 4, we bolted through two 2” thick blocks of wood to ensure that the bottom linkages can stay parallel to the platform, and similarly for the top linkages with top support. The lightweight construction was the essential so that the linkages do not sag and thus keep the bolt joints straight to achieve planer rotary motion.

While the linkages had to be lightweight, the top and the bottom supports needed to be structurally robust to support these linkages’ weight as well as to make sure that the joint positions are maintained during rotation. The top and the bottom supports both had additional design challenges: the top “flower” cannot have bracings as structural support for occupants’ entry and the bottom platform had to support the weight of more than 4 adults. The clean look of the top “flower” was achieved by using solid 1.5 inch plywood arms and fitted disk to resist lateral torsion, as shown on the right. Then each arm was bolted to the top disk (no slots) to add compression and thus reduce the vertical moment. These designs eliminated the need to add extra bracings between neighboring arms and between each arm and the middle column, which would have hindered occupants’ entry, as well as helped to achieve the clean look and emphasize the vertical continuity of the linkages. The tight fit of the assembly and straight edges of each component were very important in achieving the needed structural strengths. The original plan was to apply the same hollow structure as the linkages to reduce the weight at the top flower. However, the hollow structure did not provide enough resistance to torsion, and so we added material thickness. As the joint locations and the top flower were the first points of failures in the scale models, the robustness of the flower structure was priority over the added weight. Next, we enlarged the slotted disk to increase surface contact with each arm and thus reduce lateral torsion. We poured concrete at the base to support the increased weight of the top assembly. On the other hand, the bottom platform had to be robust to invite people to come inside. Transportability added another challenge where we had to produce two halves of the platform to be fastened together at the site. The weakest part of the structure would naturally be at the seam, so we strengthened the seam with 2” x 4” studs as well as place two caster wheels (vertical supports) under our 0.75” platform. The 4” x 4” studs were used to add the necessary height and to attach caster wheels to the platform.

7. Assembly Each component of the Bloom was produced separately to facilitate transportation, assembly, and disassembly processes. The assembly and disassembly processes each take about an hour using just a pair of wrenches. The assembly follows the following order: the flower gets placed on top of the column, the two halves of the platform are joined together around the column, the bottom linkages are bolted on to the platform, the top linkages are bolted to the flower, and then finally, the top and bottom linkages are jointed together. A few linkage assemblies were tested before the final assembly to ensure smooth rotation along the design process since step 3. Any height changes caused by different fastener assembly or additional concrete casting had to be compensated by adjusting the height of the flower assembly.

8. The handle, lever, and opening strategy: user interaction We had been testing the smoothness of opening and closing by directly rotating the platform with our hands. Though well-controlled, user interaction was awkward, so we decided to make a handle that users can push around the Bloom to operate. The handle provided leverage, reducing the amount of force required to open the structure. We kept the similar toy-like wooden structure as the Bloom itself, and sanded the handle for a comfortable grip. As the handle rotates tangentially with the platform, we discovered that a single-direction caster wheel works better than a swivel caster wheel used for the platform. For safety reasons, we wanted the lever to be able to retract all the way when not in use. We quickly experimented two methods: lever in the radial direction of the platform (not enough length) and lever placed offcenter so that the lever can be longer than the maximum radius of the opened structure. The result showed that rotation is smoother when the lever was in the radial direction. We solved this trade-off by adding extra length on the handle itself. The engagement of the lever and the handle was facilitated by sanding the corners as well as adding a stopper inside the handle. The tab (shown above in step 7) is a visual signage for user interaction as well as to indicate that it is where it locks with the handle. 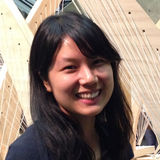