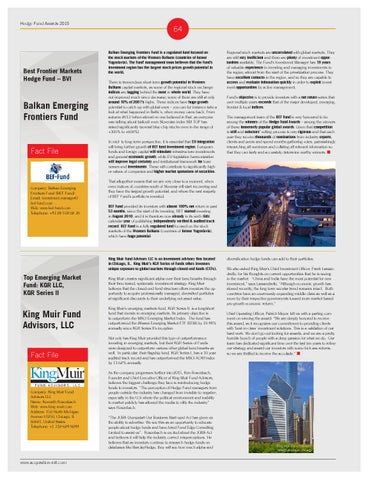 64 Balkan Emerging Frontiers Fund is a regulated fund focused on the stock markets of the Western Balkans (countries of former Yugoslavia). The Fund’ management team believes that the Fund’s investment region has the largest stock prices growth potential in the world. There is tremendous short-term growth potential in Western Balkans capital markets, as some of the regional stock exchange indices are lagging behind the most in whole world. They have not improved much since decrease; some of them are still at only around 10% of 2007’s highs. These indices have huge growth potential to catch up with global ones – you can for instance take a look at what happened in Baltic’s, when money came back. From autumn 2013 (when almost no one believed in that, as everyone was talking about bailout) even Slovenian index SBI TOP has raised significantly (several blue chip stocks even in the range of +300% to +600%). In mid- to long-term perspective, it is essential that EU integration will bring further growth of BEF fund investment region. European funds and foreign capital will stimulate infrastructure investments and general economic growth, while EU legislation harmonization will improve legal certainty and institutional framework for businesses and investments. These will contribute to significantly higher values of companies and higher market quotations of securities.

Fund’s objective is to provide investors with a net return series that over multiple years exceeds that of the major developed, emerging, frontier &amp; local indices. The management team of the BEF Fund is very honoured to be among the winners of the Hedge Fund Awards – among the winners of these immensely popular global awards. Given that competition is stiff and selectors’ vetting process is very rigorous and that each year they receive thousands of nominations from industry experts, clients and peers and spend months gathering votes, painstakingly researching all nominees and collating all relevant information so that they can fairly and accurately determine worthy winners. n

That altogether means that we are very close to a moment, when even indices of countries south of Slovenia will start recovering and they have the largest growth potential, and where the vast majority of BEF Fund’s portfolio is invested. BEF Fund provided its investors with almost 100% net return in past 53 months, since the start of its investing. BEF started investing in August 2010, and it is therefore now already in its sixth (6th) calendar year of publishing independently verified &amp; audited track record. BEF Fund is a fully regulated fund focused on the stock markets of the Western Balkans (countries of former Yugoslavia), which have huge potential.

Regional stock markets are uncorrelated with global markets. They are still very inefficient and there are plenty of investment opportunities available. The Fund’s Investment Manager has 19 years of valuable experience in investing and managing investments in the region, almost from the start of the privatization process. They have excellent contacts in the region, and so they are capable to access and evaluate information quickly in order to exploit investment opportunities by active management.

King Muir creates significant alpha over their benchmarks through their time-tested, systematic investment strategy. King Muir believes that the closed-end fund structure offers investors the opportunity to acquire professionally managed, diversified portfolios at significant discounts to their underlying net asset value. King Muir’s emerging markets fund, KGR Series II, is a long/short fund that invests in emerging markets. Its primary objective is to outperform the MSCI Emerging Market Index. The fund has outperformed the iShares Emerging Market ETF (EEM) by 19.44% annually since KGR Series II’s inception. Not only has King Muir provided this type of outperformance investing in emerging markets, but their KGR Series of Funds were designed to outperform various other global benchmarks as well. In particular, their flagship fund, KGR Series I, has a 10 year audited track record and has outperformed the MSCI ACWI Index by 11.62% annually.

diversification hedge funds can add to their portfolios. We also asked King Muir’s Chief Investment Officer, Frank Lassandrello, for his thoughts on current opportunities that he is seeing in the market. “China and India have the most potential for new investment,” says Lassandrello. “Although economic growth has slowed recently, the long term secular trend remains intact. Both countries have an enormously expanding middle class as well as a move by their respective governments toward more market-based pro-growth economic reform.” Chief Operating Officer, Patrick Meyer, left us with a parting comment on winning the award: “We are deeply honored to receive this award, as it recognizes our commitment to providing clients with ‘best-in-class’ investment solutions. This is a validation of our hard work. We don’t go out looking for awards, and we are a pretty humble bunch of people with a deep passion for what we do. Our team has dedicated significant time over the last ten years to refine our strategy and award our investors with some kick ass returns, so we are thrilled to receive the accolade.” n

As the company progresses further into 2015, Ken Rosenbach, Founder and Chief Executive Officer of King Muir Fund Advisors, believes the biggest challenge they face is reintroducing hedge funds to investors. “The perception of Hedge Fund managers from people outside the industry has changed from invisible to negative, especially in the U.S where the political environment and inability to market publicly has allowed the media to vilify the industry” says Rosenbach. “The JOBS (Jumpstart Our Business Start-ups) Act has given us the ability to advertise. We see this as an opportunity to educate people about hedge funds and have hired Fund Edge Consulting Limited to assist us”. Rosenbach is excited about the JOBS Act and believes it will help the industry correct misperceptions. He believes that as investors continue to research hedge funds on databases like BarclayHedge, they will see how much alpha and