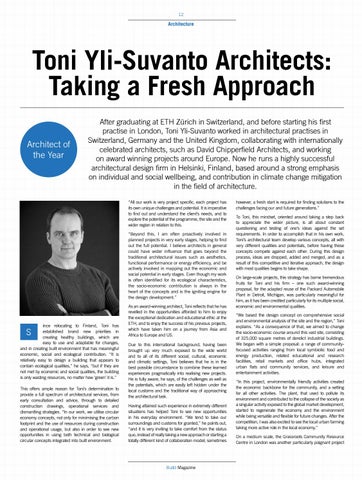 After graduating at ETH Zürich in Switzerland, and before starting his first practise in London, Toni Yli-Suvanto worked in architectural practises in Switzerland, Germany and the United Kingdom, collaborating with internationally celebrated architects, such as David Chipperfield Architects, and working on award winning projects around Europe. Now he runs a highly successful architectural design firm in Helsinki, Finland, based around a strong emphasis on individual and social wellbeing, and contribution in climate change mitigation in the field of architecture. “All our work is very project specific, each project has its own unique challenges and potential. It is imperative to find out and understand the client’s needs, and to explore the potential of the programme, the site and the wider region in relation to this. “Beyond this, I am often proactively involved in planned projects in very early stages, helping to find out the full potential. I believe architects in general could have wider influence that goes beyond the traditional architectural issues such as aesthetics, functional performance or energy efficiency, and be actively involved in mapping out the economic and social potential in early stages. Even though my work is often identified for its ecological characteristics, the socio-economic contribution is always in the heart of the concepts and is the igniting engine for the design development.”

ince relocating to Finland, Toni has established brand new priorities in creating healthy buildings, which are easy to use and adaptable for changes, and in creating built environment that has meaningful economic, social and ecological contribution. “It is relatively easy to design a building that appears to contain ecological qualities,” he says, “but if they are not met by economic and social qualities, the building is only wasting resources, no matter how ‘green’ it is.”

This offers ample reason for Toni’s determination to provide a full spectrum of architectural services, from early consultation and advice, through to detailed construction drawings, operational services and dismantling strategies. “In our work, we utilise circular economy concepts, not only for minimising the carbon footprint and the use of resources during construction and operational usage, but also in order to see new opportunities in using both technical and biological circular concepts integrated into built environment.

As an award-winning architect, Toni reflects that he has revelled in the opportunities afforded to him to enjoy the exceptional dedication and educational ethic at the ETH, and to enjoy the success of his previous projects, which have taken him on a journey from Asia and Africa to Europe and US. Due to this international background, having been brought up very much exposed to the wide world and to all of its different social, cultural, economic and climatic settings, Toni believes that he is in the best possible circumstance to combine these learned experiences pragmatically into realising new projects. He is fully aware, he says, of the challenges as well as the potentials, which are easily left hidden under the local customs and the traditional way of approaching the architectural task. Having attained such experience in extremely different situations has helped Toni to see new opportunities in his everyday environment. “We tend to take our surroundings and customs for granted,” he points out, “and it is very inviting to take comfort from the status quo, instead of really taking a new approach or starting a totally different kind of collaboration model; sometimes

however, a fresh start is required for finding solutions to the challenges facing our and future generations.” To Toni, this mindset, oriented around taking a step back to appreciate the wider picture, is all about constant questioning and testing of one’s ideas against the set requirements. In order to accomplish that in his own work, Toni’s architectural team develop various concepts, all with very different qualities and potentials, before having these concepts compete against each other. During this design process, ideas are dropped, added and merged, and as a result of this competitive and iterative approach, the design with most qualities begins to take shape. On large-scale projects, this strategy has borne tremendous fruits for Toni and his firm – one such award-winning proposal, for the adapted reuse of the Packard Automobile Plant in Detroit, Michigan, was particularly meaningful for him, as it has been credited particularly for its multiple social, economic and environmental qualities. “We based the design concept on comprehensive social and environmental analysis of the site and the region,” Toni explains. “As a consequence of that, we aimed to change the socio-economic course around this vast site, consisting of 325,000 square metres of derelict industrial buildings. We began with a simple proposal: a range of communityfocused activities ranging from local symbiotic food and energy production, related educational and research facilities, retail markets and office hubs, integrated urban flats and community services, and leisure and entertainment activities. “In this project, environmentally friendly activities created the economic backbone for the community, and a setting for all other activities. The plant, that used to pollute its environment and contributed to the collapse of the society as a singular activity exposed to the global market development, started to regenerate the economy and the environment while being versatile and flexible for future changes. After the competition, I was also excited to see the local urban farming taking more active role in the local economy.” On a medium scale, the Grassroots Community Resource Centre in London was another particularly poignant project