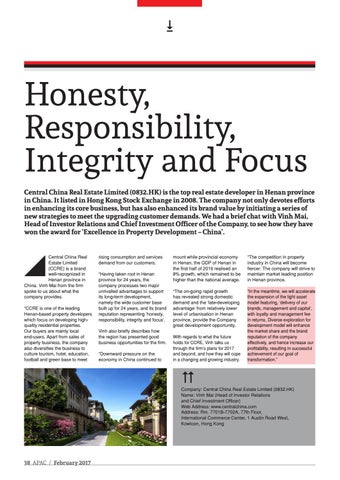 Honesty, Responsibility, Integrity and Focus Central China Real Estate Limited (0832.HK) is the top real estate developer in Henan province in China. It listed in Hong Kong Stock Exchange in 2008. The company not only devotes efforts in enhancing its core business, but has also enhanced its brand value by initiating a series of new strategies to meet the upgrading customer demands. We had a brief chat with Vinh Mai, Head of Investor Relations and Chief Investment Officer of the Company, to see how they have won the award for ‘Excellence in Property Development – China’.

Central China Real Estate Limited (CCRE) is a brand well-recognized in Henan province in China. Vinh Mai from the firm spoke to us about what the company provides. “CCRE is one of the leading Henan-based property developers which focus on developing highquality residential properties. Our buyers are mainly local end-users. Apart from sales of property business, the company also diversifies the business to culture tourism, hotel, education, football and green base to meet

rising consumption and services demand from our customers. “Having taken root in Henan province for 24 years, the company processes two major unrivalled advantages to support its long-term development, namely the wide customer base built up for 24 years, and its brand reputation representing ‘honesty, responsibility, integrity and focus’. Vinh also briefly describes how the region has presented good business opportunities for the firm. “Downward pressure on the economy in China continued to

mount while provincial economy in Henan, the GDP of Henan in the first half of 2016 realised an 8% growth, which remained to be higher than the national average.

“The competition in property industry in China will become fiercer. The company will strive to maintain market leading position in Henan province.

“In the meantime, we will accelerate the expansion of the light asset model featuring, ‘delivery of our brands, management and capital’, with loyalty and management fee in returns. Diverse exploration for development model will enhance the market share and the brand reputation of the company effectively, and hence increase our profitability, resulting in successful achievement of our goal of transformation.”

With regards to what the future holds for CCRE, Vinh talks us through the firm’s plans for 2017 and beyond, and how they will cope in a changing and growing industry.