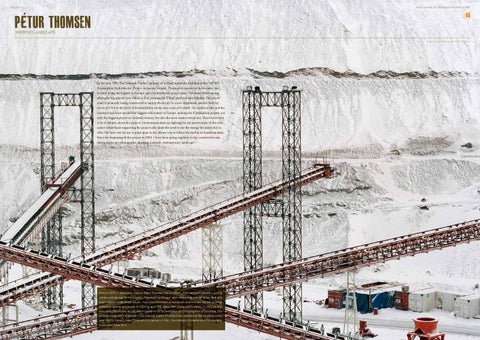 What Became of the people we used to be?

“In the year 2003 The National Power Company of Iceland started the building of the 700 MW Kárahnjúkar Hydroelectric Project in eastern Iceland. The project consists of three dams, one of them being the highest in Europe, and a hydroelectric power plant. The dams block among others the big glacial river Jökulá á Dal, creating the 57km2 artificial lake Hálslón. The power plant is primarily being constructed to supply electricity to a new aluminium smelter built by Alcoa of USA in the fjord of Reyðarfjörður on the east coast of Iceland. The artificial lake and the constructions have spoiled the biggest wild nature in Europe, making the Kárahnjúkar project, not only the biggest project in Icelandic history, but also the most controversial one. There have been a lot of debates about this project. Environmentalists are fighting for the preservation of the wild nature while those supporting the project talk about the need to use the energy the nature has to offer.The best way for me to participate in the debate was to follow the land in its transformation. Since the beginning of the project in 2003, I have been going regularly to the construction site, taking landscape photographs, showing Icelandic contemporary landscape”.

Born in 1973, in Reykjavík, Iceland Pétur Thomsen has in recent years attracted attention, both in Iceland and abroad for his projects, “Imported Landscape” and Umhverfing, both of which deal with man’s attempt to dominate nature - man’s transformation of nature into environment. He has received numerous awards and prizes. In 2004 he won The 10th LVMH young artist’s award. In 2005 he was selected by the Musée de L’Élysée in Lausanne for reGeneration: 50 Photographers of Tomorrow. The exhibition Imported Landscape in the National Gallery of Iceland was selected as the exhibition of the year 2010 in Iceland. Pétur Thomsen is Chairman of FíSL, The Icelandic Contemporary Photography Association,www.fisl.is What Became of the People we used to be?

What Became of the People we used to be?