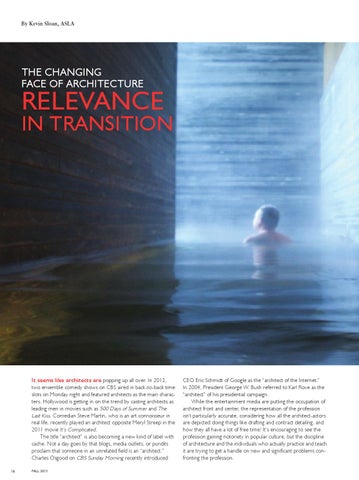 ThE ChANGING FACE OF ARChITECTURE

it seems like architects are popping up all over. In 2012, two ensemble comedy shows on CBS aired in back-to-back time slots on Monday night and featured architects as the main characters. Hollywood is getting in on the trend by casting architects as leading men in movies such as 500 Days of Summer and The Last Kiss. Comedian Steve Martin, who is an art connoisseur in real life, recently played an architect opposite Meryl Streep in the 2011 movie It’s Complicated. The title “architect” is also becoming a new kind of label with cache. Not a day goes by that blogs, media outlets, or pundits proclaim that someone in an unrelated field is an “architect.” Charles Osgood on CBS Sunday Morning recently introduced 16

CEO Eric Schmidt of Google as the “architect of the Internet.” In 2004, President George W. Bush referred to Karl Rove as the “architect” of his presidential campaign. While the entertainment media are putting the occupation of architect front and center, the representation of the profession isn’t particularly accurate, considering how all the architect-actors are depicted doing things like drafting and contract detailing, and how they all have a lot of free time! It’s encouraging to see the profession gaining notoriety in popular culture, but the discipline of architecture and the individuals who actually practice and teach it are trying to get a handle on new and significant problems confronting the profession.

Inside, you’ll find intelligent and though-provoking exploration of all things educational–the balancing act happening at today’s schools of architecture, young practitioners’ wisdom, the changing relevance of architects, and even new directions for designing schools and universities. 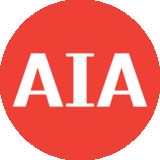