n June 1838, the Danish Government officially appointed Albert Heinrich Riise as the exclusive pharmacist for the island of Saint Thomas, in the Caribbean, and granted him monopoly status to produce alcohol in his pharmacy. Initially, Albert developed rum and bitters as medicine for stomach ills. However, his rum soon gained in popularity beyond its medical function, and in 1893 The A.H. Riise Company received its first International Gold Medal at the World Exhibition in Chicago. Albert Heinrich Riise (1810–1882) came from Ærøskøbing where his father, Jens Christian Riise, (1773–1812) was a seafaring captain. He became a pharmacist and in 1832 he was employed at “Det Kgl. Militær-og Waisenhusapotek”– the royal military and orphanage pharmacy in Copenhagen”. He collaborated with local doctors and became a pioneer in the field of distilling rum and bitter, that at the time, was used mainly for medicinal purposes, first and foremost as a much needed and sought after cure for intestinal, gastric, and other disorders. He developed and refined strong brands such as Old St. Croix Brand, Riises Guava Rum, A.H Riise Rum, and more. In the aftermath of his success Riise was awarded many honorary positions on the island of St. Thomas. At one point he was Director of the National Bank of St. Thomas and was made Knight of the Order of the Dannebrog in 1860.

n 1888, Copenhagen hosted the Great Nordic Exhibition of Industry, Agriculture and Art, also known as the COPENHAGEN WORLD EXPO 1888. More than 1.4 million people visited the exhibition during its six-month duration. A.H.Â Riise participated in the Great Nordic Exhibition in Copenhagen. The rum was showcased on the West Indian pavilion and the company was awarded a gold medal. It is with this honour that we celebrate this special event with the launch of the 1888 Gold Medal Edition Rum.

strong connection between the Danish Navy and A.H. Riise began after Riise began distilling his own rum in Charlotte Amalie, St Thomas in the early half of the nineteenth century. Not only did Riise supply the Danish navy in the West Indies with rum, but rum shipped back to Denmark was aged in old oak barrels and stored securely under navy guard in Copenhagen. A.H. Riise continues to celebrate its connection with the Danish navy where, today, officers who have successfully undergone their training celebrate their ‘passing out’ with a couple of tots of A.H. Riise Danish Navy Rum. All of A.H. Riise’s ‘naval’ rums are molasses based and are produced by slow fermentation, then kettle distilled in a traditional “pot still” to produce a pure rum with an 85% pure alcohol strength. This method results in an outstanding rum displaying an extremely dark, almost ebony colour with complex flavour-hints of coffee,

aniseed, liquorice, burnt caramel, molasses, spices and cedar. When combined with the exotic and elegant taste of bitter orange and the bergamot fruit, this leaves an extended, solid, bold and sweet aftertaste on the palate.

n several different occasions in the late 19th century and early 20th century Denmark negotiated with both Germany and the USA to either sell or exchange its territory of the Danish West Indies. On March 31st, 1917, the USA completed the purchase of the Danish West Indies from Denmark for the sum of 25 million dollars and the new administration renamed the former Danish territory as the United States Virgin Islands.

A.H.Riise Centennial Celebration Rum has been beautifully created from a selection of rums which remain true to the original A.H. Riise recipes and which have been aged in Oloroso sherry, port and P.X. casks. The result is a rum which has a rich, complex and elegant taste of raisins, brown sugar and molasses, infused with delicate notes of caramel, butterscotch and fresh sugarcane, ending off with a lingering, slightly dry taste of wood tannins with hints of spice, pepper and leather.

he term “Non Plus Ultra” originates from Hercules pillars of the Roman mythology and marked the boundary of the known world. The columns bore the inscription “Non Plus Ultra” (Latin). This means (Nothing Further Beyond) as a warning to seafarers not to continue the voyage into the unknown world. This Rum specifically honors the term “Non Plus Ultra” which loosely translated means “The Best” or “None after this” as it is the best and oldest rum that we have available. Non Plus Ultra is hand blended of our “Master Distiller” who personally selects each cask included in the final Rum blend. This rum has a beautiful dark mahogany-like color, with an elegant spicy bouquet with notes of molasses, oak, tobacco and orange. The taste of Non Plus Ultra is a unique experience, with its very rich, long and fruity flavor with hints of cedar, vanilla, caramel, fine sherry and Seville orange, which continues almost indefinitely, and ending with an elegant soft finish.

NON PLUS ULTRA IS ALSO AVAILABLE IN SAUTERNES CASK AND BLACK EDITION.

he word alcohol has the same linguistic roots as the word alchemy. We associate this word with the creation of something remarkable, something rare. In the manufacture of all A.H. Riise barrel-aged rums the result is always something special, but in this particular case, it is also truly rare and remarkable. Many secrets are hidden away in rumâ&#x20AC;&#x2122;s lifetime spent in beautiful oak barrels. With enough luck and skill, you can suddenly hit a rich vein; a barrel that stands out from all the others. This particular blend is not just remarkable, it is precious, like platinum. A.H. Riise Platinum Batch No 1 Rum is a solera aged rum, which is blended from two time-enriched barrels, one of which is 21 years old, the other 40. Both barrels have lain under the sun and matured in Europe in a temperate climate. This climate results in a slow and gentle development, which ensures that every barrel can mature at its own pace. This Platinum Reserve rum is utterly unique. It has the classic stamp of A.H. Riise all over it but has very much its own character and personality. Because of the uniqueness of the two barrels this rum comes from, A.H. Riise Platinum Reserve can only be produced in a limited quantity of 6,000 bottles.

Riise gathered his inspiration for his world-renowned navy rum from his travels around the Caribbean, and just as then, todayâ&#x20AC;&#x2122;s Platinum Reserve rum is blended from only the finest ingredients available. We source all our rum from the West Indies and Central America and the special Riise taste can only be achieved by blending these unique ingredients, which are all barrel-aged in oak casks with varying storage times and cask finishings.

he launch of this rare Limited Edition Rum is a celebration of the friendship between two unique men – King Haakon VII of Norway (born as Prince Carl of Denmark) and Valdemar Riise, son of A.H. Riise. Prince Carl visited the Danish West Indies twice when he was part of the crew on board Royal Danish Navy vessels. King Haakon and Riise established a close friendship over the years and enjoyed each other’s company on several occasions when King Haakon visited the A.H. Riise Pharmacy and Riise’s private home. Valdemar Riise became Norwegian Consul of the Danish West Indies. In 1912 he was awarded the Norwegian Order of Saint Olaf, first degree, for outstanding national and humanitarian achievements by King Haakon of Norway.

A.H. RIISE SPIRITS is one of the largest Scandinavian producers and global distributors of rum, gin, bitters, cognac and aquavit. Our portfolio includes A.H. Riise Rum, Tranquebar Gin, Kronborg Akvavit, and Santos Dumont Rum. Historically, the Danish Navy in particular, and seamen in general, have had considerable influence on what we drink today, as well as being responsible for introducing genever, rum and gin to many countries across the globe. As an example, spices imported into Denmark by the Danish East India company were introduced as a flavouring to â&#x20AC;&#x2DC;geneverâ&#x20AC;&#x2122;, and today we still create that distinctive flavour of gin through the marriage of traditional craftsmanship with modern distillation techniques. A.H. RIISE SPIRITS is a young company involved with promoting historic brands and we are proud to be involved in continuing their legacy by filling your glass with the unique flavours of original recipes and authentic ingredients. Headquartered in Copenhagen, our success stems from commitment to both tradition and innovation, high standards, loyalty to business partners, and responsiveness to our customers. 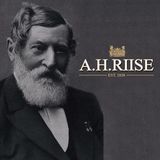