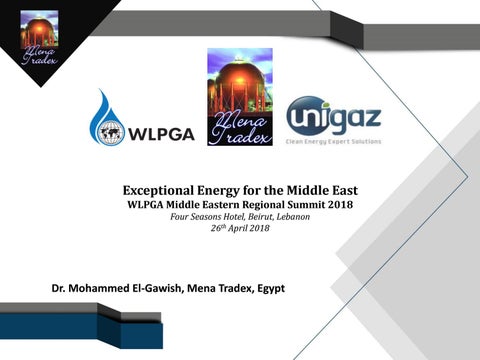 History Of The Egyptian LPG Market

* Units are per Thousand Tons * According to Petrogas, MOP & EGPC

Source Of The LPG • Egypt imports about 53% of its consumption. • While 47% is being locally produced

* The Transportation fleet carried 1795 Thousand Tons of LPG all over Egypt last year * Out of these semi-trailers, 112 were supplied by Mena Tradex

Egypt Vision 2030 takes into consideration the challenges facing the process of development in Egypt. These challenges are represented in the scarcity of natural resources such as energy, land and water. Hence, the development concept adopted by the strategy is based on three main dimensions: Economic Social Dimension Environmental Dimension.

THANK YOU FOR YOUR ATTENTION