Missing Persons: A Guide for Teachers 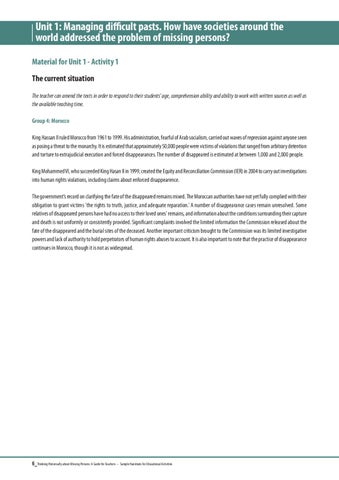 Unit 1: Managing difficult pasts. How have societies around the world addressed the problem of missing persons? Material for Unit 1 - Activity 1 The current situation The teacher can amend the texts in order to respond to their studentsâ&amp;#x20AC;&amp;#x2122; age, comprehension ability and ability to work with written sources as well as the available teaching time. Group 4: Morocco King Hassan II ruled Morocco from 1961 to 1999. His administration, fearful of Arab socialism, carried out waves of repression against anyone seen as posing a threat to the monarchy. It is estimated that approximately 50,000 people were victims of violations that ranged from arbitrary detention and torture to extrajudicial execution and forced disappearances. The number of disappeared is estimated at between 1,000 and 2,000 people. King Mohammed VI, who succeeded King Hasan II in 1999, created the Equity and Reconciliation Commission (IER) in 2004 to carry out investigations into human rights violations, including claims about enforced disappearence. The governmentâ&amp;#x20AC;&amp;#x2122;s record on clarifying the fate of the disappeared remains mixed. The Moroccan authorities have not yet fully complied with their obligation to grant victims &#39;the rights to truth, justice, and adequate reparation.&#39; A number of disappearance cases remain unresolved. Some relatives of disappeared persons have had no access to their loved ones&#39; remains, and information about the conditions surrounding their capture and death is not uniformly or consistently provided. Significant complaints involved the limited information the Commission released about the fate of the disappeared and the burial sites of the deceased. Another important criticism brought to the Commission was its limited investigative powers and lack of authority to hold perpetrators of human rights abuses to account. It is also important to note that the practice of disappearance continues in Morocco, though it is not as widespread.

Missing Persons: A Guide for Teachers