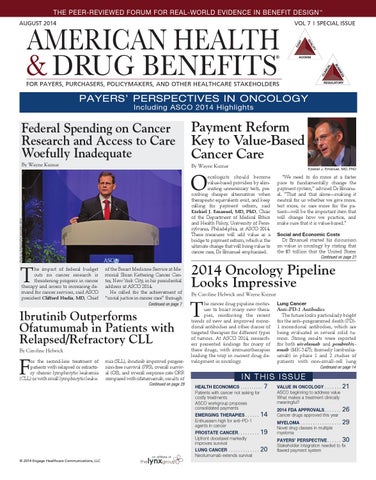 For Payers, Purchasers, Policymakers, and Other Healthcare Stakeholders

of the Breast Medicine Service at Memorial Sloan Kettering Cancer Center, New York City, in his presidential address at ASCO 2014. He called for the achievement of “social justice in cancer care” through Continued on page 7

ncologists should become value-­based providers by eliminating unnecessary tests, prescribing cheaper alternatives when therapeutic equivalents exist, and keep calling for payment reform, said Ezekiel J. Emanuel, MD, PhD, Chair of the Department of Medical Ethics and Health Policy, University of Pennsylvania, Philadelphia, at ASCO 2014. These measures will add value as a bridge to payment reform, which is the ultimate change that will bring value to cancer care, Dr Emanuel emphasized.

he cancer drug pipeline continues to boast many new therapies, reinforcing the recent trends of new and improved monoclonal antibodies and other classes of targeted therapies for different types of tumors. At ASCO 2014, researchers presented findings for many of these drugs, with immunotherapies leading the way in current drug development in oncology.

Anti–PD-1 Antibodies The future looks particularly bright for the anti–programmed death (PD)1 monoclonal antibodies, which are being evaluated in several solid tumors. Strong results were reported for both nivolumab and pembroliz­ umab (MK-3475; formerly lambroliz­ umab) in phase 1 and 2 studies of patients with non–small-cell lung Continued on page 14

in th is is s u e VALUE IN ONCOLOGY . . . . . . . . ASCO beginning to address value What makes a treatment clinically meaningful?

“We need to do more at a faster pace to fundamentally change the payment system,” advised Dr Emanuel. ”That and that alone—making it neutral for us whether we give more, test more, or care more for the patient—will be the important item that will change how we practice, and make sure that it is value-based.”