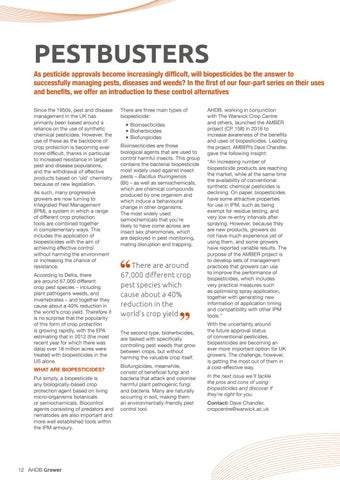 As pesticide approvals become increasingly difficult, will biopesticides be the answer to successfully managing pests, diseases and weeds? In the first of our four-part series on their uses and benefits, we offer an introduction to these control alternatives Since the 1950s, pest and disease management in the UK has primarily been based around a reliance on the use of synthetic chemical pesticides. However, the use of these as the backbone of crop protection is becoming ever more difficult, thanks in particular to increased resistance in target pest and disease populations, and the withdrawal of effective products based on ‘old’ chemistry because of new legislation. As such, many progressive growers are now turning to Integrated Pest Management (IPM), a system in which a range of different crop protection tools are combined together in complementary ways. This includes the application of biopesticides with the aim of achieving effective control without harming the environment or increasing the chance of resistance. According to Defra, there are around 67,000 different crop pest species – including plant pathogens weeds, and invertebrates – and together they cause about a 40% reduction in the world’s crop yield. Therefore it is no surprise that the popularity of this form of crop protection is growing rapidly, with the EPA estimating that in 2012 (the most recent year for which there was data) over 18 million acres were treated with biopesticides in the US alone. WHAT ARE BIOPESTICIDES? Put simply, a biopesticide is any biologically-based crop protection agent based on living micro-organisms botanicals or semiochemicals. Biocontrol agents consisting of predators and nematodes are also important and more well established tools within the IPM armoury.

There are three main types of biopesticide: ●● Bioinsecticides ●● Bioherbicides ●● Biofungicides Bioinsecticides are those biological agents that are used to control harmful insects. This group contains the bacterial biopesticide most widely used against insect pests – Bacillus thuringiensis (Bt) – as well as semiochemicals, which are chemical compounds produced by one organism and which induce a behavioural change in other organisms. The most widely used semiochemicals that you’re likely to have come across are insect sex pheromones, which are deployed in pest monitoring, mating disruption and trapping.

There are around 67,000 different crop pest species which cause about a 40% reduction in the world’s crop yield The second type, bioherbicides, are tasked with specifically controlling pest weeds that grow between crops, but without harming the valuable crop itself. Biofungicides, meanwhile, consist of beneficial fungi and bacteria that attack and colonise harmful plant pathogenic fungi and bacteria. Many are naturally occurring in soil, making them an environmentally-friendly pest control tool.

AHDB, working in conjunction with The Warwick Crop Centre and others, launched the AMBER project (CP 158) in 2016 to increase awareness of the benefits and uses of biopesticides. Leading the project, AMBER’s Dave Chandler, gave the following insight: “An increasing number of biopesticide products are reaching the market, while at the same time the availability of conventional synthetic chemical pesticides is declining. On paper, biopesticides have some attractive properties for use in IPM, such as being exempt for residue testing, and very low re-entry intervals after spraying. However, because they are new products, growers do not have much experience yet of using them, and some growers have reported variable results. The purpose of the AMBER project is to develop sets of management practices that growers can use to improve the performance of biopesticides, which includes very practical measures such as optimising spray application, together with generating new information of application timing and compatibility with other IPM tools.” With the uncertainty around the future approval status of conventional pesticides, biopesticides are becoming an ever more important option for UK growers. The challenge, however, is getting the most out of them in a cost-effective way. In the next issue we’ll tackle the pros and cons of using biopesticides and discover if they’re right for you. Contact: Dave Chandler, cropcentre@warwick.ac.uk

Catch up with the latest issue of the grower with brand new look.