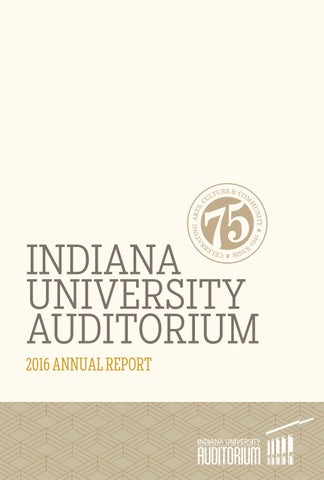 Letter from the Director & At-a-Glance

DIRECTOR ‌s we conclude our celebration of IU Auditorium’s 75th anniversary as the leading p ‌ erforming arts organization in South Central Indiana, we are proud that our institution continues to set industry standards in terms of quality, leadership, innovation, and guest satisfaction. IU Auditorium exists to create opportunities for Indiana University students, faculty, staff, alumni, and the local community to experience and interact with the performing arts and beyond.

Throughout 2015–2016, we continued to raise the bar and exceed expectations. Doug Booher, Director

We expanded our educational offerings, provided even more preprofessional opportunities for students, as well as presented an incredible array of world-class performances. Overall, we served over 160,000 guests at events in the past year alone. It is because of the support we receive from our patrons, sponsors, donors, and IU that we continue to thrive year after year. As we look into the future, we are excited to continue to use our unique position and set of specialized skills to enhance the IU experience and enrich the lives of all whom IU touches. Thank you for another fantastic season and we look forward to seeing you as we embark on our 2016–2017 season!

ENGAGEMENT t IU Auditorium, we are committed to furthering the student experience. In addition to providing greatly-reduced admission prices, we also provide educational programming that connects students with our visiting artists and maintain a robust core of student employees, interns, and volunteers. The Auditorium is a learning laboratory where students gain pre-professional training—whether as volunteer ushers, box office clerks, guest services managers, or other members of our team. At IU Auditorium, students come together in an environment of inclusion that both prepares them for the future and helps our university feel like home.

During the 2015–2016 season, our student workforce included:

Mentoring Our staff is an educational resource for students university-wide. This year we assisted Arts Administration master’s students in promoting the Singing Hoosiers Spring Concert, worked alongside Zeta Tau Alpha to present Big Man On Campus, advised the Asian Student Association for Taste of Asia, and mentored students from Union Board as they marketed and presented multiple Union Board lectures and events— including the Welcome Week and Little 500 concerts (which combined hosted nearly 10,000 students).

his season offered a variety of cast interaction and educational opportunities in which our student patrons (and in some cases, the general public) could take part. In total, we had over 2,000 participants across all events!

hroughout the 2015â&#x20AC;&#x201C;2016 season, IU Auditorium sought to serve as an educational resource for students and embrace the overarching strategic plan of IU. Along with imparting handson venue management experience in a context that enriches the student campus experience, we provided five scholarships that enabled students from all walks of life to further engage in their academic pursuits at IU. Whether students are assisting patrons, providing administrative support, or experiencing our historic venue for the first time, we are proud to represent the university and support our mutual goals of enriching the student educational experience through diverse avenues of student participation. 7

Twyla Tharp, and Indiana native, was awarded the Presidentâ&#x20AC;&#x2122;s Medal by President McRobbie.

ENRICHMENT U Auditorium provides a direct connection between the residents of South Central Indiana and Indiana University. We are proud to be the face of IU to the thousands of community members who enter our doors each season. Here are some of our key initiatives by which we were able to engage with members of our community.

For nearly every season performance, we provided supplemental educational programming—additions that enrich the IU Auditorium experience and connect the community more deeply with our artists, our venue, and Indiana University.

A program which just began in 2013, “Give the Magic” grew and evolved this year to provide more underserved members of our community access to the Auditorium and our programming. This season, we were able to supply tickets to over 100 children and adults from organizations including Habitat for Humanity, Girls Inc., and more.

In October, we partnered with WonderLab to provide free, hands-on exploration behind the science of magic in coordination with our production of The Illusionists. In conjunction with B97 Radio/WHCC for the performance of Annie, the IU Auditorium lobby was filled with free, familyfriendly activities tied to the show’s theme which engaged our youngest patrons in creative play.

In 2015–2016, IU Auditorium partnered with various community organizations to collect donations. We conducted a food drive with proceeds going to the Hoosier Hills Food Bank, were a presenting partner with Lotus Festival to help bring global music artists to Bloomington, sponsored a toy collection in partnership with Toys for Tots, and collected pet-friendly items to support the Bloomington Animal Shelter—Annie’s Sandy is a rescue pet, you know! 9

PRIDE s a proud unit of Indiana University, IU Auditorium actively engages with student organizations, highlights IU’s knowledgeable faculty, and proudly showcases our historic facility. Additionally, IU Auditorium’s staff members possess a highly-specialized skill set in event presentation, and lend their expertise to departments throughout the University—assisting in the flawless execution of events ranging from large-scale ceremonies to athletic events to concerts, both inside and outside our four walls.

s we celebrated our 75th anniversary, we also launched several efforts to further engage the IU community. Here are a few of the ways we forged deeper connections with faculty, staff, community members, and IU students past and present:

A special development campaign was launched to raise funds directly benefiting IU students. Through generous donor support, we were able to provide free admission to more than 60 students to the performances of STOMP, and provided a VIP experience, including front-row seats, free admission, and a post-show reception with the cast of Once for 40 select students from RPS.

In an effort to compile memories from our 75th, we reached out to our patrons, supporters, employees, and former students to submit their favorite Auditorium memories. Now everyone can log onto HistoryPin.org, peruse pinned memories and add their own!

Written by Kenneth L. Turchi, Assistant Dean of the IU Maurer School of Law, Indiana University Auditorium: 1941–2016 was published by IU Press in April of 2016 and is available for purchase at IU Auditorium or via Amazon.com.

As a nod to the rich history of the Auditorium, the general public can now search through a comprehensive history of events at IU Auditorium by visiting our archive database on IUauditorium.com.

Interdepartmental Collaboration Did you know that IU Auditorium provides support services for and works alongside many other IU entities? For example, our box office services are used to support ticketing needs for the IU Cinema and Department of Theatre, Drama, and Contemporary Dance, as well as regional IU campuses ; IU Event Services provides guest service and staffing for all IU Athletics and University events; our marketing and event management staff work alongside Union Board to present events; and we collaborate with departments like the IU Jacobs School of Music to design residencies that connect our artists with IUâ&#x20AC;&#x2122;s students.

he 2015–2016 season was an ongoing celebration of our rich history of incredible performances, Broadway classics, contemporary dance, local favorites, classical artists, and never-before-seen performances—the 75th anniversary year was filled to the brim with world-class arts and events.

Other Engagements longside our scheduled season events, we were pleased to host a number of additional events during 2015â&#x20AC;&#x201C;2016. These events allow students and community members to present their own events at IU Auditorium, broaden the number of perspectives we are able to add to the public conversation, and further our position as the communityâ&#x20AC;&#x2122;s gathering place. John Kerry addresses IU students

The support we receive from the University partially funds discounted use of the Auditorium by University departments and student organizations.

Did you know that IU Auditorium hosts one of the largest student volunteer groups on campus? The ratio of volunteers to staff is about 30 to 1!

IU President Michael A. McRobbie and Provost Lauren Robel served as hosts of the IU Auditorium 75th Anniversary Gala on April 9. The event celebrated the role IU Auditorium has played for both Indiana University and the surrounding community over the past 75 years. Festivities included dinner, music, and remarks by the President, Provost, and IU Auditorium Director Doug Booher. Guests were seated on the IU Auditorium stage for a dinner prepared by Traditions by David Tallent, an IU catering company led by the nationally-recognized executive chef.

"The impact of the Auditorium goes far beyond bringing world-class performers and prominent public figures to Bloomington…The Auditorium is a cultural hub that offers community members incredible opportunities for engagement and firsthand experiences in the arts and humanities." LAUREN ROBEL, PROVOST AND EXECUTIVE VICE PRESIDENT INDIANA UNIVERSITY BLOOMINGTON

The special guest performer was jazz trumpeter Chris Botti, an IU Jacobs School of Music alumnus. Since the release of his critically acclaimed album When I Fall In Love in 2004, Botti has become the largest-selling American instrumental artist. His latest release, Impressions, won the Grammy Award for Best Pop Instrumental Album in 2013.

“Over the years, the Auditorium has hosted a multitude of brilliant lectures and superb artistic performances that have reflected the cultural tastes of members of our community and enriched their lives immeasurably.” MICHAEL A. MCROBBIE, PRESIDENT INDIANA UNIVERSITY

Guests dine on the Auditorium stage.

“IU’s reputation for excellence in the arts and humanities is also based, in part, on its superb facilities—iconic buildings like the IU Auditorium where members of the IU community and the general public have unparalleled opportunities to engage with the arts. [IU Auditorium is] a hub of cultural vibrancy and a major part of Indiana University’s glorious tradition in the arts.” Michael A. McRobbie President Indiana University