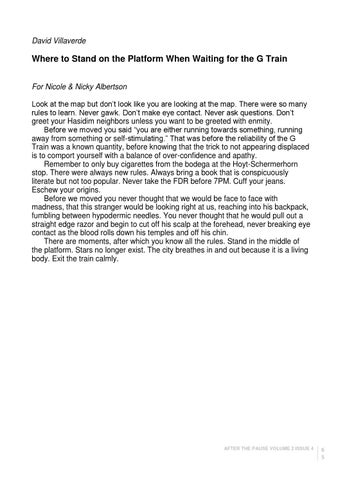 Where to Stand on the Platform When Waiting for the G Train For Nicole &amp; Nicky Albertson Look at the map but don’t look like you are looking at the map. There were so many rules to learn. Never gawk. Don’t make eye contact. Never ask questions. Don’t greet your Hasidim neighbors unless you want to be greeted with enmity. Before we moved you said “you are either running towards something, running away from something or self-stimulating.” That was before the reliability of the G Train was a known quantity, before knowing that the trick to not appearing displaced is to comport yourself with a balance of over-confidence and apathy. Remember to only buy cigarettes from the bodega at the Hoyt-Schermerhorn stop. There were always new rules. Always bring a book that is conspicuously literate but not too popular. Never take the FDR before 7PM. Cuff your jeans. Eschew your origins. Before we moved you never thought that we would be face to face with madness, that this stranger would be looking right at us, reaching into his backpack, fumbling between hypodermic needles. You never thought that he would pull out a straight edge razor and begin to cut off his scalp at the forehead, never breaking eye contact as the blood rolls down his temples and off his chin. There are moments, after which you know all the rules. Stand in the middle of the platform. Stars no longer exist. The city breathes in and out because it is a living body. Exit the train calmly.

AFTER THE PAUSE VOLUME 2 ISSUE 4 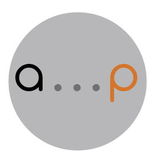