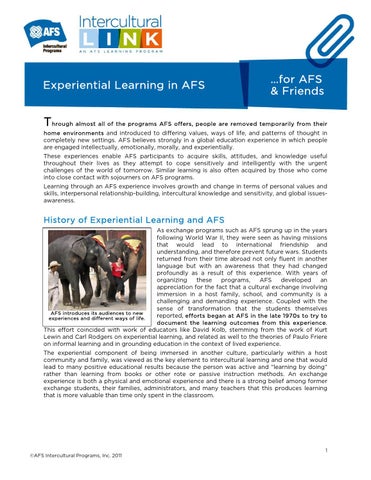 Through almost all of the programs AFS offers, people are removed temporarily from their home environments and introduced to differing values, ways of life, and patterns of thought in completely new settings. AFS believes strongly in a global education experience in which people are engaged intellectually, emotionally, morally, and experientially. These experiences enable AFS participants to acquire skills, attitudes, and knowledge useful throughout their lives as they attempt to cope sensitively and intelligently with the urgent challenges of the world of tomorrow. Similar learning is also often acquired by those who come into close contact with sojourners on AFS programs. Learning through an AFS experience involves growth and change in terms of personal values and skills, interpersonal relationship-building, intercultural knowledge and sensitivity, and global issuesawareness.

History of Experiential Learning and AFS As exchange programs such as AFS sprung up in the years following World War II, they were seen as having missions that would lead to international friendship and understanding, and therefore prevent future wars. Students returned from their time abroad not only fluent in another language but with an awareness that they had changed profoundly as a result of this experience. With years of organizing these programs, AFS developed an appreciation for the fact that a cultural exchange involving immersion in a host family, school, and community is a challenging and demanding experience. Coupled with the sense of transformation that the students themselves AFS introduces its audiences to new reported, efforts began at AFS in the late 1970s to try to experiences and different ways of life. document the learning outcomes from this experience. This effort coincided with work of educators like David Kolb, stemming from the work of Kurt Lewin and Carl Rodgers on experiential learning, and related as well to the theories of Paulo Friere on informal learning and in grounding education in the context of lived experience.

The experiential component of being immersed in another culture, particularly within a host community and family, was viewed as the key element to intercultural learning and one that would lead to many positive educational results because the person was active and “learning by doing” rather than learning from books or other rote or passive instruction methods. An exchange experience is both a physical and emotional experience and there is a strong belief among former exchange students, their families, administrators, and many teachers that this produces learning that is more valuable than time only spent in the classroom.

Experiential Learning versus Experience-Based Learning It is important here to clearly define what is meant by the term “experiential” as it relates to learning and learning theory. Experiencebased learning and Experiential Learning are not one and the same. The learning that occurs from having real-world experiences may be referred to as situated or experience-based learning, whereas Experiential Learning, as defined by Kolb, is a process through which knowledge is created, rather than acquired, through the interaction with and transformation of one’s own experiences. According to Kolb’s model of experiential learning, experiences and new knowledge are grasped during the Concrete Experience (CE) and Active Experimentation (AE) phases of a four-phase cycle. In order for that knowledge Graphic by Lucas Welter (2012) to be transformed into meaningful learning, learners must reflect on concrete experiences during a Reflective Observation (RO) phase and derive meaning from that reflection in an Abstract Conceptualization (AC) phase, which can then be acted upon in Active Experimentation. Without the abstract and reflective phases of experiential learning theory in AFS programs, sojourners and other participants may miss out on true transformational learning that relies on reflection and meaning-making. Experiential Learning integrates cognitive and behavioral elements and leaves room in the learning process for affective and subjective experiences. This integration is important for AFS because of the direct reference it makes in its mission to provide people with the cognitive knowledge, behavioral skills, and affective understanding Reflecting, individually or in groups, is a key part of the experiential learning. to build a more just and peaceful world.

A Focus on Intercultural Learning Intercultural Learning is a special type of Experiential Learning because it focuses on the mindset of the people involved and encourages them to change their perspective on the world by putting themselves in the shoes of someone from a different culture. In talking about the particular application of this concept to her own students, intercultural educator Dr. Connie Peterson of the University of Minnesota (USA) states: “The cross-cultural or cross-class context  the context that pulls students out of familiar surroundings, that forces them to listen to other kinds of people, that forces them to deal with data that don’t fit into the way they’ve understood the world from before  creates a particularly pregnant learning moment where critical thinking is much easier if things don’t work. It’s like moving from an earth-centered view of the earth to a sun-centered view of the earth. Eventually enough pieces don’t fit, and you have to start coming up with alternative explanations. … The necessary cognitive dissonance for critical thinking can often be produced by cross-cultural contacts which pull out your underpinnings and force you to start over.”

This kind of shift in perspective is the basis of intercultural learning. As Peterson goes on to explain, it is a highly emotional learning experience that requires support and mediation in order to achieve the desired results. Our goal is to bring about this new perspective that builds on the knowledge gained through the experience in both program participants and those who interact closely with them. AFS stresses that an active response, a change in behavior, is a critical part of the AFS approach to global education. It is learning that must be applied and put to use. We can become aware of global issues by studying them, but AFS promotes more than intellectual awareness. The intercultural learning method employed in our programs is both experiential and experiencedbased: “learning by doing.” Our participants do not just watch, read, or listen. They participate in another culture, form relationships with other people, give service to a community, and share their experiences in meaningful ways.

AFS audiences form relationships and actively participate in other cultures.

AFS Learning Objectives Related to Experiential Learning Personal Values and Skills Developed Through Experiential Learning: As stated previously, at the core of AFS experiences is the removal of people from their familiar environment and their placement in a new environment. In such unusual circumstances, participants are confronted repeatedly with crises of varying dimensions. They must make judgments and take actions in the absence of familiar cues. But AFS participants are well prepared in advance, and they are assured of support and guidance on an as-needed basis. Thus, participants are able to turn these crises into opportunities for reassessing their values, stretching their capacities, and practicing new skills. AFS participants also gain awareness of previously hidden aspects of themselves because of their constant contact with others who organize their lives on the basis of different assumptions. Due to situations such as these, most participants attain the following learning objectives: 1.

Interpersonal Relationship-Building Developed Through Experiential Learning: Every AFS participant becomes involved in daily living and working arrangements with a variety of people in the new environment. Whether a participant’s placement is as an individual or as a member of a group of exchange visitors, she or he must develop and maintain relationships with others from diverse backgrounds. The interpersonal skills developed in this intercultural context are transferable to many other settings during the participant’s lifetime. Host nationals often gain similar benefits from their contacts with the AFS participants. Most AFS participants are able to achieve the following learning objectives: 1.

To deepen concern for and sensitivity to others, demonstrated by increased ability and willingness to “put oneself in the other person’s place,” that is, to empathize. 3

To increase adaptability to changing social circumstances, demonstrated by greater flexibility in the process of adjusting to new people, social situations and cultural norms. 3. To value human diversity, demonstrated by an eagerness for communication, mutual respect, and friendship with others from a variety of backgrounds different from one’s own. 4. To communicate with others using their ways of expression, demonstrated by the ability to carry on extended conversations with hosts in their native language, and by the ability to use and to react appropriately to non-verbal signals common in the host culture. 5. To enjoy oneself in the company of others, demonstrated by a diminishing of selfconsciousness and an increase in readiness to participate joyfully and wholeheartedly in many varieties of social gatherings.

Intercultural Knowledge and Sensitivity Developed Through Experiential Learning: During the course of their immersion in the host culture, AFS participants are exposed to innumerable dimensions of that culture. These dimensions range from the simple acquisition of the necessities of daily life to the complex and subtle distinctions made by the hosts among alternative values, social norms, and patterns of thought. In the case of exchanges involving adult professionals, hosts and visitors both gain new skills and alternative concepts, leading to a sharpening of their talents. The experience of being involved in so many dimensions of life has the effect of deepening participants’ insights into their home culture as well as their knowledge of the host culture. Most people on an AFS exchange attain these learning objectives: 1.

Global Issues-Awareness Developed Through Experiential Learning: Living in a place other than one’s home community allows AFS participants to empathize with their hosts’ perspective regarding certain conflicts, and thus to appreciate that workable solutions must be culturally sensitive, not merely technologically feasible. Such awareness well prepares the AFS participant to take his or her place among those who are addressing the crises facing humankind. Most people exchanged by AFS attain the following learning objectives: 1.

To deepen interest in and concern about world affairs, demonstrated by a sustained commitment to obtaining information from many sources with respect to the problems commonly facing all human beings. To be aware of worldwide linkages, demonstrated by a willingness and ability to make personal choices in certain ways because one cares about the effect of one’s choices on people in other communities throughout the world.

To gain in commitment to the search for solutions to worldwide problems, demonstrated by the giving of one’s personal resources (time, energy, and money), whether in a professional or voluntary capacity, to the search for culturally sensitive and technologically feasible solutions.

Experiential Learning Beyond the Classroom In many countries, schools and educators are now moving outside the classroom to provide their students with valuable educational experiences that engage them in various types of community service. As a long-time champion of experiential learning and education, AFS organizations in some of these countries are working in this direction, finding ways to involve hosted AFS participants, young people interested in AFS exchanges, and AFS alumni (returnees) in service programs and projects that prepare them to assume responsibilities as citizens in their own communities and as members of a global society.

is based on learning theories from Kolb, Lewin, Rogers and Freire, among others. creates knowledge through the interaction and transformation of one’s own experiences. emphasizes the importance of reflection. supports intercultural learning by allowing our audiences to “learn by doing”. is reflected in our AFS Educational Objectives.

ICL for AFS & Friends is a series of short, insightful articles on important intercultural topics featuring AFS's point of view. There are intended for AFSers, educators and all others who either are or would like to become involved with the AFS mission. 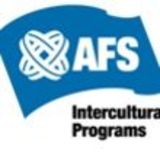