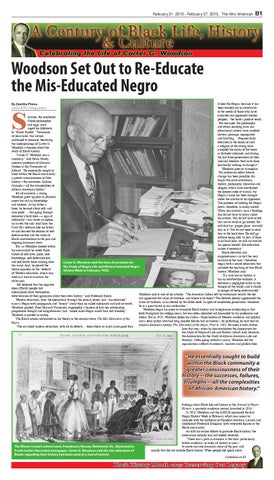 Woodson Set Out to Re-Educate the Mis-Educated Negro it does the Negro, because it has been worked out in conformity to the needs of those who have enslaved and oppressed weaker ocrates, the renowned peoples,” the book’s preface reads. Greek philosopher “For example, the philosophy and sage, once and ethics resulting from our urged his followers educational system have justified to “Know thyself.” Thousands slavery, peonage, segregation of years later, that advice and lynching.... Negroes daily continued to resonate, becoming educated in the tenets of such the underpinnings of Carter G. a religion of the strong have Woodson’s theories about the accepted the status of the weak study of Black history. as divinely ordained, and during “Carter G. Woodson was a the last three generations of their visionary,” said Ibram Kendi, nominal freedom they have done assistant professor of Africana practically nothing to change it.” Studies at the University of Woodson goes on to explain, Albany. “He essentially sought to “No systematic effort toward build within the Black community change has been possible, for, a greater consciousness of their taught the same economics, history—the successes, failures, history, philosophy, literature and triumphs—all the complexities of religion which have established African-American history.” the present code of morals, the By all accounts, a young Negro’s mind has been brought Woodson grew up poor in physical under the control of his oppressor. assets but rich in knowledge The problem of holding the Negro and wisdom. At his father’s down, therefore, is easily solved. knee, he learned about self- and When you control a man’s thinking race-pride…, that going through you do not have to worry about someone’s back door—a sign of his actions. You do not have to tell inferiority—was never an option, him not to stand or go yonder. He no matter the cost. And from the will find his ‘proper place’ and will Civil War veterans like his father, stay in it. You do not need to send he also learned the lessons of selfhim to the back door. He will go determination and the value of without being told. In fact, if there Black contributions to the past and is no back door, he will cut one for ongoing American story. his special benefit. His education But, as Woodson looked within makes it necessary.” his community he noted those Black elevation and values of self-love, pride, selfempowerment—in fact the very knowledge, self-determination survival of the race—therefore, and self-worth were missing from Carter G. Woodson and the then-Association for began with a sound education that too many. And, he placed the the Study of Negro Life and History launched Negro included the teaching of true Black blame squarely on the “defects” History Week in February 1926. history, Woodson said. of Western education, which was “If a race has no history, it used as a tool to maintain the has no worthwhile tradition, it status quo. becomes a negligible factor in the AFRO Archives “He believed that the negative thought of the world, and it stands ideas (Black) people had in danger of being exterminated,” internalized about themselves Woodson said in one of his articles. “The American Indian left no continuous record. He did were because of their ignorance about their own history,” said Professor Kendi. not appreciate the value of tradition; and where is he today? The Hebrew keenly appreciated the Western education, from the elementary through the tertiary levels, had “mis-educated” value of tradition, as is attested by the Bible itself. In spite of worldwide persecution, therefore, many a Negro with propaganda and “heresy” about their so-called inferiority and lack of worth, he is a great factor in our civilization.” Woodson posited. Even Harvard University, supposedly a bastion of first-tier scholarship, Woodson began his quest to chronicle Black history and to legitimize scholarship in that progressive thought and enlightenment, had “ruined more Negro minds than bad whiskey,” field throughout his college years, but was often ridiculed and dissuaded by his professors and Woodson is quoted as saying. others. But in 1915, Woodson defies his critics—those leaders of Western academia and politics The Black scholar elaborated on his theory in the seminal tome, The Mis-Education of the and a leery public who had long insisted Blacks had no history—by publishing his first text on Negro. African-American history, The Education of the Negro Prior to 1861. He takes it even further, “The so-called modern education, with all its defects… does others so much more good than later that year, when he also establishes the Association for the Study of Negro of Life and History (which later becomes the Association for the Study of African American Life and History). Often going without a salary, Woodson led the organization’s efforts to research, uncover and publish their

“He essentially sought to build within the Black community a greater consciousness of their history—the successes, failures, triumphs—all the complexities of African-American history.”

The Misses Cooke’s school room, Freedman’s Bureau, Richmond, Va., illustrated in Frank Leslie’s illustrated newspaper. Carter G. Woodson said the mis-education of Blacks regarding their history had been used as a tool of control.

findings about Black life and history in the Journal of Negro History, a quarterly academic journal launched in 1916. In 1926, Woodson and the ASNLH sponsored the first Negro History Week in February, which was meant to coincide with the birthdays of President Abraham Lincoln and abolitionist Frederick Douglass, both venerated figures in the Black community. As with his earlier efforts to promote Black history, the observance initially was not widely received. Jas. E. Taylor/Library of Congress “There was a push in America at the time, particularly within academia, to unify all history as one— to create just one American story of the past, and usually that did not include Black history. When people did speak about Continued on B5

“He believed that the negative ideas (Black) people had internalized about themselves were because of their ignorance about their own history.” of ASALH: Black history clubs sprang up; teachers demanded materials to instruct their pupils; and progressive Whites, not simply White scholars and philanthropists, stepped forward to endorse the effort. 464513-ADVR113402 AFRO Black Month Ad_v2_P.pdf 1 the 2/18/15 9:35 AM amplified the The “Black Awakening” and the History Civil Rights Movement of 1960s further

Continued from B1 Black history back then it was denigrated,” said Kendi, the Albany university professor. “For him to say we should appreciate it and celebrate it was revolutionary.” Woodson’s vision of the Negro History Week went beyond his goal of educating African Americans about themselves—though that was part of his aim; it was also about educating others about the value of Blacks’ contributions to America and the world. According to a Jan. 23, 1932 AFRO article, Woodson explained that the celebration of Negro History Week would be for nought if Black, White and all children were not given a chance to learn about all aspects of Black history in their schools. “Unless Negro History Week can be used to accomplish such a purpose, the mere celebration would be meaningless. To have numerous essays and speeches on what we have done while failing to do this thing which is necessary for our present good will mean absolute failure so far as this observance is concerned,” he is quoted as saying in the article. “The watchword throughout this season, therefore, should be to uproot propaganda in the minds of students and place in their hands certain works to inform them as to the contributions of all races. Interracial goodwill will be thereby stimulated, that this country may become a land of happiness and prosperity.” With the passage of time, Negro History Week caught on, according to an essay by Daryl Michael Scott, president

importance of and interest in the historic contributions of African Americans. And, in 1976, the celebration was expanded to a month through a proclamation by President Gerald Ford, who urged Americans to “seize the opportunity to honor the too-often neglected accomplishments of black Americans in every area of endeavor throughout our history.” Though Black History Month has since become a national fixture, there are some who question whether the observance is still necessary or even beneficial in what some have claimed as a post-racial society. Experts say that is not surprising as it mirrors what some Woodson detractors have said from the beginning. “If you look back now at his lifetime, most people assume his movement was widely embraced when it was not,” Kendi said. “He received a huge amount of resistance both within the Black community and outside.” For example, among assimilationists, anything that played up racial differences was a no-no. “There have always been Black people who view Black progress as Black people assimilating with Whiteness,” Kendi added. In the presence of such self-effacing thought, persistent socioeconomic disparities and racism, Woodson would have likely argued that Black History Month, and its spotlighting of Black history and achievement, is very much an ongoing necessity, Kendi said. “Carter G. Woodson would have looked at the persistent disparities and said that clearly we are not an inclusive society [and that] so long as we have White Americans, Black Americans and those of other races who see Black people as inferior there is still a need for multiculturalism and the study of Black history.” 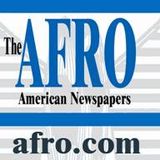