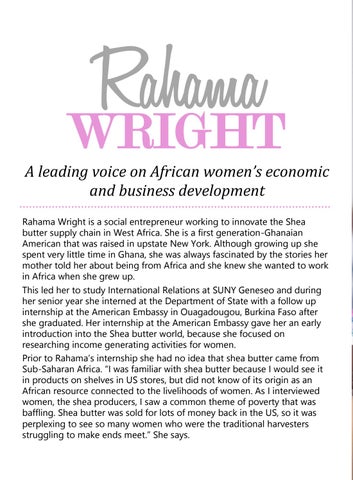 Rahama WRIGHT A leading voice on African women’s economic and business development Rahama Wright is a social entrepreneur working to innovate the Shea butter supply chain in West Africa. She is a first generation-Ghanaian American that was raised in upstate New York. Although growing up she spent very little time in Ghana, she was always fascinated by the stories her mother told her about being from Africa and she knew she wanted to work in Africa when she grew up. This led her to study International Relations at SUNY Geneseo and during her senior year she interned at the Department of State with a follow up internship at the American Embassy in Ouagadougou, Burkina Faso after she graduated. Her internship at the American Embassy gave her an early introduction into the Shea butter world, because she focused on researching income generating activities for women. Prior to Rahama‟s internship she had no idea that shea butter came from Sub-Saharan Africa. “I was familiar with shea butter because I would see it in products on shelves in US stores, but did not know of its origin as an African resource connected to the livelihoods of women. As I interviewed women, the shea producers, I saw a common theme of poverty that was baffling. Shea butter was sold for lots of money back in the US, so it was perplexing to see so many women who were the traditional harvesters struggling to make ends meet.” She says.

Celebrating women of African heritage on every page.

Celebrating women of African heritage on every page.