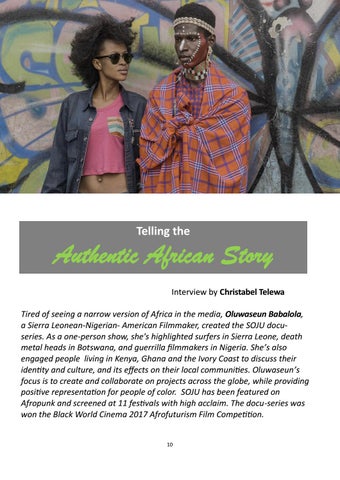 Authentic African Story Interview by Christabel Telewa Tired of seeing a narrow version of Africa in the media, Oluwaseun Babalola, a Sierra Leonean-Nigerian- American Filmmaker, created the SOJU docuseries. As a one-person show, she&#39;s highlighted surfers in Sierra Leone, death metal heads in Botswana, and guerrilla filmmakers in Nigeria. Sheâ&amp;#x20AC;&amp;#x2122;s also engaged people living in Kenya, Ghana and the Ivory Coast to discuss their identity and culture, and its effects on their local communities. Oluwaseunâ&amp;#x20AC;&amp;#x2122;s focus is to create and collaborate on projects across the globe, while providing positive representation for people of color. SOJU has been featured on Afropunk and screened at 11 festivals with high acclaim. The docu-series was won the Black World Cinema 2017 Afrofuturism Film Competition. 10