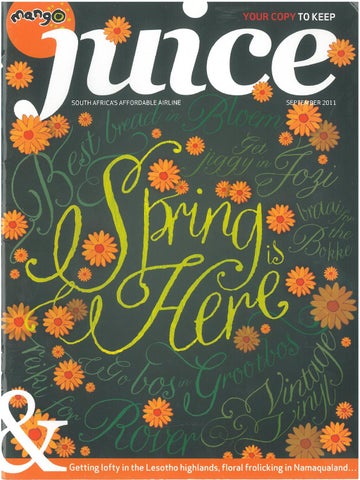 rising steeply out of lesotho’s gently rolling sandstone hills, a spectacular mountain pass takes you to the slopes of afriski, africa’s highest ski resort, just over five hours from Jo’burg or Bloemfontein.

t was either the music, the cinnamonscented waft of gluhwein or the boerewors rolls that never tasted so good, but the vibe at Afriski certainly sweeps you up the moment you arrive. For first-time skiers and families, it’s ideal. Instructors aplenty welcome you to the nursery and intermediate slopes – to sharpen

your turns and master your snow ploughs – before you’re ready to head up to the top of the 3 220m-high Mahlasela ski slopes for a mind-blowingly beautiful ride down the highest ski run on the continent.

Country road But what’s unique about skiing in Lesotho is that getting here is such an experience in itself. First you pass through rustic local villages where time has seemingly come to a standstill; where oxen drag ploughs through chocolatecoloured soil while blanketed men amble along the road on Basotho ponies, and donkeys carry bags of maize to be milled at remote villages. Not much has changed since Lesothosaurus roamed these lands 200-million years ago (sites bearing the footprints of this diminutive ornithopod from the late Triassic and early Jurassic period are found all over the country). Since 2002, however, Afriski has been quietly developing in one of the most

beautiful parts of the country. Thatched huts with pretty blue doors and windows give way to the hairpin bends of the Moteng pass, lined with frozen waterfalls and needle-sharp icicles hanging from rocks. The pass leads you to a road running along a ridge that feels like it straddles the top of the world, with snowy peaks glistening all around, giving a birds-eye view of Afriski’s slopes and the resort below.

the weekend warriors So who drives all this way for a weekend of skiing? They’re known as ‘weekend warriors’, typically leaving from Jo’burg or Pretoria before dawn and hitting the slopes as the first lift leaves. The roads can be challenging in icy conditions (nothing the 4x4-ers can’t manage, of course) but even the trusty hired car made it there, taking an easy wriggle around potholes on the last stretch that signalled the end of the journey, with the blissful first rush of adrenaline and freedom of the slopes.

While we walked awkwardly in our boots and hadn’t yet mastered the art of casually slinging skis over our shoulders, groups of enthusiastic ski junkies zoomed past, donning their gloves, sunscreen and goggles, eager to get going. Afriski partner Oliver Schwankhart is one of those who caught the bug when he was young – his business partner Peter Pyper told me that he first skied the Mahlasela slopes at the age of three, when two stone huts halfway up were the only shelter. Like many of the experienced team members here, Oliver and Peter met through the Wits Ski Club and worked together at Tiffindell – the erstwhile Eastern Cape ski resort – and are now committed to Afriski, improving its facilities constantly.

rates: from r110 p.p.p.n. for backpackers to between r350 and r450 p.p.p.n for a room, self-catering chalet or apartment. day visitors: entry fee is r50 on arrival – this buys you a voucher for food at the gondola café. a full day’s ski pass costs r350; half-day passes: r250. all equipment can be hired. all other costs are clearly detailed at www.afriski.net. don’t forget to pack waterproofs, a beanie and good gloves!

Leave the CoLd outside

Opposite page a snowboarding wizard flies through the air; This page, clockwise from top kids take to the main slope with ease; Breathtaking rural silhouettes at sunset on the way back to Maliba; a first attempt at the intermediate slope, snow-ploughing to gain confidence; Cozy wooden chalets at afriski

It was school holidays when we planned our trip and Afriski’s chalets were chock full, so we did the journey four times in three days, staying at the beautiful Maliba Lodge for three nights and the last one at a cosy chalet

Traveller’s tip Break up the journey between Jo’burg, Bloem or durban and lesotho with a stopover in the colourful village of clarens. Stay at the beautiful stone river road house, 10km out of town towards fouriesburg, from r350 p.p.p.n. it sleeps 10. to book, call 084 656 1832 or email art@addyhoyle.co.za.

at Afriski. Maliba, Lesotho’s only five-star lodge, lies in the Ts’ehlanyane National Park, 45 minutes from the bustling town of ButhaButhe. For skiers, it also offers three-star, selfcatering accommodation at its comfortable and (very importantly) toasty-warm stoneand-thatch cottages, each of which sleeps eight. It’s a two-hour journey to the slopes but, if you leave at dawn, you’ll be sipping coffee on the Gondola Café deck just as the action begins. You can pack in at least five hours of non-stop fun on the slopes before returning to a hearty three-course dinner around a log fire at Maliba at the end of the day – just be sure to book it before you leave so that the chef knows you’re coming.

highLands hospitaLity Nestled in a valley surrounded by snow-capped mountains and with a river rushing past, Maliba itself is a wonderful spot to relax. You can even visit a nearby village with one of the lodge staff, who all come from the nearby community. We met the village’s traditional healer inside a hut with dried frogs and snakes hanging from the low thatch roof, then drifted uphill to watch local sorghum beer being made. Daniel Tsosi, the barman who quickly found someone to take his post at the lodge so that he could guide us to his village of Ha’mali, tempted the kids with a competition to see who could keep a bundle of thatch on their heads the longest while we slipped inside the ‘brewery’ to watch the process of making the local beer. Wonderfully fattening and with variable alcohol levels, it takes a week to make yet only costs R4 a litre. Nothing is wasted – a second, less alcoholic brew is made afterwards and the rest of the sieved sorghum is fed to very happy pigs. Back at the main lodge, the viewing deck, with its hanging cane chairs and loungers, was the best spot to chill, but walking or riding on horseback into the mountains alongside the crystal-clear river is one of the most stunning ways to get used to the altitude and ease gently into the relaxed soul of Lesotho.

With a backpack full of lunch treats, we spent the day exploring the pools and waterfalls deep in the amphitheatre of snow-sprinkled peaks, ahead of the two busy days we had planned on the ski slopes.

FLippin’ sCary By mid-morning the following day, our ski instructor, Brad Richardson, had the kids eating out of his hand. They thought he was nothing short of ‘awesome’ as he patiently guided and encouraged them, always keeping safety and technique top of their minds. They loved it and, before long, went speeding down the slopes. The view from the top of the big slope is enough to humble anyone, though – my teenage son, a mountain-biker and climber who’s no stranger to adrenaline, described it as ‘flippin’ scary’. But nothing quite prepared me for the sight of our little nine-year-old whizzing past us with a wicked smile of achievement on her face. She’d been in hospital a few months prior and unable to walk for almost three weeks, so between her and me, that look of sheer joy was more deeply meaningful than anyone on the slopes could even begin to imagine!

Juice readers who book before december 2011 for the next ski season at afriski will receive one free full-day pass per person worth r350. to qualify, email info@afriski.net or call 058 303 6831. please present a copy of this month’s Juice magazine in order to claim your pass. From top the river Lodge at Maliba is ideal for families and day trips; spacious five-star suites dot the hillside at Maliba, each with a secluded viewing deck; Maliba’s deck draws guests for languid lunches; ha’mali village, near ts’ehlanyane national park

rates: five-star chalets from r1 370 p.p.p.n. sharing, r2 050 for a single, r395 for kids aged 5-12 (under-fives are free), including all meals at the five-star lodge. Selfcatering, three-star river lodge chalets from r230 p.p.p.n. (underfives free). rates valid until end october 2011. to book, call 031 702 8791. as the lodge is located within the ts’ehlanyane national park, a once-off entrance fee is charged to all guests. check out www.malibalodge.com for more info and special offers.

My Son, a MountainBiker and cliMBer who’S no Stranger to the ruSh of adrenaline, deScriBed it aS ‘flippin’ Scary’