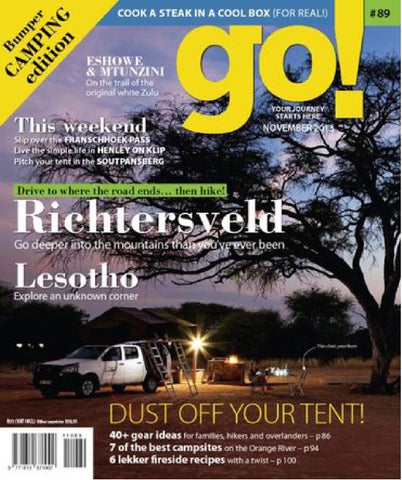 South Africans often have a blind spot when it comes to Lesotho, but just look at the landscapes! If you haven’t crossed the border yet, it’s time you did.

FEAST YOUR EYES. Flowing through a 300 m deep gorge, the Senqu River makes a U-turn near Ha Sekake. Ask permission at the mission station before visiting this viewpoint – you have to drive through the mission’s gate. GPS: S30.02531 E28.29214

ometimes you just need to disappear into a place like Lesotho. That’s exactly what I did, for three days, in a convoy of three bakkies led by tour guide Peter Grosskopff. Peter knows the valleys and mountain passes better than most. He was only 14 when he drove a truck with supplies from Matatiele to his uncle’s general store in Lesotho for the first time. We departed Matat and crossed the border at Ramatsiliso’s Gate, then followed the mountain road (there’s no other kind in Lesotho) towards Sehlabathebe. On the way we turned off so Peter could show me the Mathebeng Pass – a cling-to-thedoor-handle experience with views of green valleys from the top. We crawled back down the pass and camped next to the Thamathu River near the village of Ha Soloja, where I watched a flock of southern bald ibis (rare in South Africa, common here) roosting against the sandstone cliffs. The next day we drove a road that Peter didn’t know – the last stretch had only been added recently. Lesotho is 4x4 country and you need someone who can get you out of trouble should your vehicle get stuck or break down. Peter is also fluent in Sesotho: an indispensable skill here. We travelled in a south-

westerly direction, along the banks of the Tsoelike River, through places that see about five bakkies a week. Later we turned north, negotiated two more passes and set up camp next to the Senqu River, the upper reaches of the Orange. This is where the road ended and donkey country began. Somewhere across the river, high up on the mountain, was the village of Lebakeng. Our camp was close to a crossing point and people came and went, some by boat, some by donkey. We woke up, climbed back into the bakkies and slipped down one hairpin bend after another to the old suspension bridge over the Tsoelike. We ate sandwiches and leftover braai chops in the shadow of the bridge, which is no longer used by vehicles but still services the shepherds and their animals. Then we aimed for the tar road that leads along the Senqu, and drove to the view of all views where the river took a deep bow at our feet. (See previous spread.) Even though it was autumn, a thunderstorm slammed into our camp next to someone’s mielie fields near Motse-Mocha, a place so small you’ll struggle to find it on a map. And then we drove back to Matat via the Ongeluksnek Pass, heads clear and ready to tackle real life again.

PHOTO ESSAY LESOTHO 1 HANDBRAKE UP. The Mathebeng Pass was built in the 1950s by road engineer Bob Phillips. It’s 2 950 m high and can only be tackled in a 4x4. Even the vultures get out and walk the last few metres. 2 COME IN. Shepherds use caves in the mountains to protect their flocks from the rain and cold. This overhang next to the Leqooe River is 50 m at its deepest, 20 m high and about 100 m wide, with two halls. Local folklore has it that the cave can shelter up to 2 000 animals. 3 WELCOME. Anna and Phillip Ramahadi own the Takalimane shop in Ha Semenya. Buy fresh makwenyas – small round vetkoek. Even though some shops sell tinned food, it’s a good idea to bring your own supplies from South Africa. 4 SHED SOME LIGHT. Phillip Rawlins tends the braai in the camp next to the Senqu River. Peter Grosskopff’s dog Foxy waits in the shadows for a chop. We camped wild every night in areas where Peter knows the people living nearby. There are no official campsites on the route we drove.

5 PONY NETWORK. This young man and I struggled to understand each other, so I didn’t get his name, but I could deduce that he was on his way to a higher-lying area in search of cellphone reception.

KNOW BEFORE YOU GO Peter Grosskopff works for a tour company called Bundu Boys and his Lesotho tours depart from Matatiele. He can work out a customised tour based on the sights you want to see and the time you have at your disposal. Guide fee: R1 400 per day for the whole group. You have to bring your own 4x4 and all your own food, water and camping supplies. Contact: 082 450 0560 (Peter); pgpower@telkomsa.net; bunduboy@venturenet.co.za Spend a few more days. Matatiele is a good base on the South African side of the border. Book in at Resthaven Guesthouse, where you can get more tourism information ( 039 737 4067 Philip/Elrita; resthaven.co.za). gomag.co.za

6 IN THE RED. A southern bald ibis is the size of a hadeda (its distant cousin) and lives in groups of about 10. Also look out for Drakensberg rock-jumper and the rare bearded vulture. If you spot a bearded vulture in Lesotho or the Drakensberg, consider yourself lucky. There are only about 350 of these birds left in the area. They also occur in the highlands of Ethiopia and the Alps in Europe. 7 STONE SENTINEL. The St Francis mission church at Tsoelike dates from 1951.

DON’T LOOK DOWN. If you can’t climb a stepladder without feeling anxious, close your eyes when you wind down to the old suspension bridge across the Tsoelike River, which was built in 1930. The Tsoelike is one of the tributaries of the Senqu. 8

9 CAMP OF STORMS. A storm rolled in on our third day in Lesotho and we had to brave lightning and heavy rain for a few hours. Fortunately no tents blew away and the weather cleared enough for us to throw some mielies on the braai, purchased from the owner of the mielie field next to our camp.

LET KIDS BE KIDS. Children can still be carefree up in the mountains. Their voices echoed over the valleys and they didn’t have to worry that someone would tell them to quieten down. I sat on the hillside above our camp near Ha Soloja for quite a while, watching children come home from school. 10