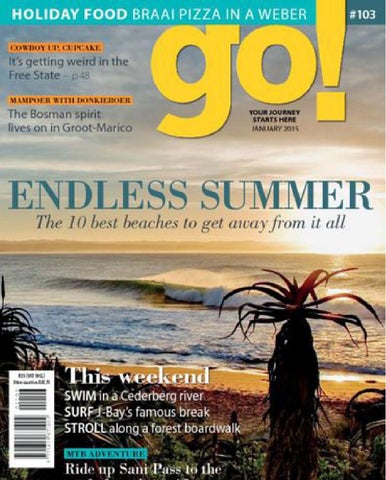 Breathless in Lesotho In September 2013, four madcap mountain bikers pedalled up Sani Pass and onward to the summit of Thabana Ntlenyana – the highest point in Africa south of Kilimanjaro. Gavin Raubenheimer was one of them.

notice scrawled on the wall in the pub at the top of Sani Pass reads, “Lesotho is not for sissies”. The scrawler was probably referring to the icy winters, rutted roads, sparsely populated valleys and the high price of beer. But the same could be said about mountain biking in this small, wild kingdom. Since the time of the great southern con­ tinent of Gondwanaland, a thick crust of basalt that covers much of Lesotho has been eroding. One small patch, not much bigger than a netball court, has eroded a little slower and stands slightly higher than anywhere else in the area. In 1951, a group of mountaineers led by legendary Natal climber Des Watkins

trudged to the summit of this small mountain carrying a land surveyor’s theodolite, which they used to establish the height of the hump: 3 482 m above sea level. Today, Thabana Ntlenyana – which means “beautiful little mountain” in Sotho – is recognised as the highest point in southern Africa. We’d be following in Watkins’s footsteps 63 years later. But instead of carrying survey paraphernalia, we’d be riding, pushing and carrying our bicycles. Thabana Ntlenyana is not a spectacular peak by any stretch of the imagination, but its approaches are laced with thrilling single­track riding. Our mission was to ride up Sani Pass,

READER STORY LESOTHO lug our bikes to the top of the mountain then head west down the Sakeng Valley to the St James mission station. The single­ track paths of the Sakeng area, trodden flat by sheep and cattle, make for some of the best riding in Lesotho. Let’s go!

My friend Caroline Storrar, a physiotherapist from Pietermaritzburg, had been keen to join me on this ride. Caro and I also managed to recruit two other riders: Anne­Marie Smith, a school counsellor who is never found wanting for words and who helps to ensure there are never awkward pauses in conversation, and James Voortman, an engineer who can explain how all things mechanical or chemical are made (and blown up). We’d also have a two­person back­up team: Kim Breytenbach and Audry Lotter, who would follow us in 4x4s. We departed from Sani Lodge Backpackers’ near Underberg and rode about 30 km of relatively tame up­and­down dirt road to the South African Border Post on Sani Pass. The riding was harder than it should have been due to a brisk westerly wind blowing in our faces. The big event of the first day was to get from SA border control up 9 km of rugged switchbacks onto the Lesotho plateau. We slowed to walking pace, chugging along in granny gear. Conversation levels dropped, even silencing the Counsellor for short periods. The pass had just been graded, making its surface loose under our knobbly tyres and tiring legs. It was not made any easier by the

constant headwind. James, Caro and I pushed through the last hairpin bends to the lip of the escarpment, but the Counsellor was determined to ride all the way to the top. This proved to be an almost impossible task and she ended up lagging far behind as she zigzagged from one side of the road to the other, providing much entertainment for the rest of us. After having our passports stamped at Lesotho border control, we braved the final 8 km ride west to Sani Stone Lodge near the foot of Black Mountain Pass. The wind didn’t cease and we moved on at a snail’s pace, despite the fact that it was a gradual downhill. At last we turned off the main road and had an easier ride for 2 km to the shelter of the lodge and the welcoming cold beers that our support crew had waiting for us.

OLD-SCHOOL GPS. The riders relied on detailed topographic maps to find their way from Sani Stone Lodge into the Sakeng Valley and down to the St James mission station. That’s the summit of Thabana Ntlenyana in the background.

Day two dawned – the big day for summiting Thabana Ntlenyana and negotiating the long descent to the St James mission station. In total, we planned to ride about 60 km. The gods had been kind and there wasn’t a breath of wind. The Counsellor and the Engineer, having been temporarily silenced the day before, were at full strength and Caro and I were again tested on our moral opinion and mechanical knowledge. We backtracked to the main road, pausing for a flock of sheep: Lesotho’s version of a morning traffic jam. We crossed the road and portaged across the Sani River and onto a wide, flat section of grassland with intersecting sheep

LESOTHO FROM THE SADDLE. The switchback section of Sani Pass (below) is seriously steep. Once the riders were on the plateau, they tested their skills on single track through tiny villages (below left).

final summit ridge are rideable, but they’re technically tricky and made even more difficult by the breathlessness of being above 3 000 m. We summited the peak and celebrated briefly at the top, then retreated to a shelter just below the ridge. This was our lunch stop and we ad­ mired the views of the escarpment to the east. A cold front was approaching from KZN and we watched a boiling mass of clouds buffeting the cliff line some 5 km away. We had taken almost four hours to get here from Sani Stone Lodge – a distance of only 14 km – and the bulk of the day’s riding still lay ahead…

TO THE TOP (right). At 3 482 m above sea level, the summit of Thabana Ntlenyana is the highest point in southern Africa. The cyclists were determined to get to the top with their bikes – and there was only one way to do it. A BREAK FROM THE HILLS (below). The first few kilometres on day two were pleasantly flat as the cyclists rode north from Sani Stone Lodge to Thabana Ntlenyana.

WHERE THE RIDERS STAYED Sani Stone Lodge The lodge overlooks the Sani River and is a delightful and rather esoteric place to stay. It consists of a selfcatering bunkhouse, individual rondavels and a very modern, out-of-place bar in a separate building. We spent a wonderful, warm night there thanks to paraffin heaters and gas-heated showers. Rates: Self-catering from R150 per person; book in advance. GPS: S29.56879 E29.21644 Contact: 0026 65 631 0331; sanistonelodge.co.za

St James Lodge This is a well-run little establishment on the outskirts of the mission station and a fine place for weary riders. It has a common lounge, kitchen and separate dormitory rooms. Rates: Self-catering from R100 per person; camping from R70 per person; book in advance. GPS: S29.34626 E29.01973 Contact: 071 6726 801; stjameslodge.co.za

paths coming and going in all directions. Navigating by topographical map, we headed upstream to the first portage: a rough, steep ridge. We each tried to find the most comfortable way to carry our bikes. A bicycle is not made to be carried and my body reminded me of this as I was pushed, poked and bashed by various pieces of projecting metal. The Engineer discovered he could wear his bike like a necklace, by sticking his head through the frame triangle – genius. At the top of the ridge, we dropped our saddles for extra stability and swooped down to the next river. The last big carry of the trip was up to the summit of Thabana Ntlenyana. This took about an hour. Sections of the

From the summit, our route went west for a few kilometres, into open meadows of short grass, interspersed with low hillocks. This area is the source of the Sakeng River, which we’d be following for the rest of the day. We sped down hills and flew along great stretches of single track until we entered the Sakeng Valley proper. The size of the path along the river increased the further west we went. We started out on small sheep paths and progressed to multi­lane sheep highways. After some 30 km, at the end of the valley, we were on a track that a vehicle would be able negotiate. After two hours of riding from the summit and some more portaging over rocks and boulders, the first village appeared. Its only connection with the outside world was a single dirt path in the direction we were travelling. Soon after, the ever­chatty Counsellor decided to cheat death. In a moment of distraction, she took a dive over her handlebars

on a particularly steep drop­off. It was a spectacular event to witness and she would have been given a 9.8 for style, but she lost points for her landing. Although sore and slightly shaken, the chatting soon resumed and we knew all was well. At last, with the sun dipping behind the mountains, we got to the Mokhotlong road. Following a short cycle along this main road, we turned right to St James. The light was fading fast – we even had to turn on our headlamps. When we finally got to St James Lodge, everyone declared the day’s ride as “epic”. We were welcomed by our (slightly worried) back­up team and settled down to another laid­back evening, sharing tales and nursing tired bodies in front of the fire. Due to time restraints on the final day, and to avoid riding along a road in the process of being blasted in preparation for tarring, we opted out of the full 90 km ride over Black Mountain Pass and down Sani Pass again. Instead, we started from the summit of Black Mountain Pass and rode down its rutted zigzags towards the Sani Border Post. As we neared the edge of the escarpment, the blue sky disappeared and we entered a wall

of mist and cloud. The temperature was close to zero as we inched our way back into South Africa, where the humdrum of ordinary life awaited. Goodbye Lesotho, thanks for having us.

THE ROUTE. Day one up Sani Pass to Sani Stone Lodge: about 40 km. Day two from the lodge to the St James mission station: about 60 km, mostly along rough roads and sheep trails. On day three, the cyclists got a lift to the top of Black Mountain Pass (dotted line) and rode back down Sani Pass.

extensive range of clothing, footwear and accessories. Share your travel story with us! Write to

Breathless in Lesotho January 2015 No103

Breathless in Lesotho January 2015 No103