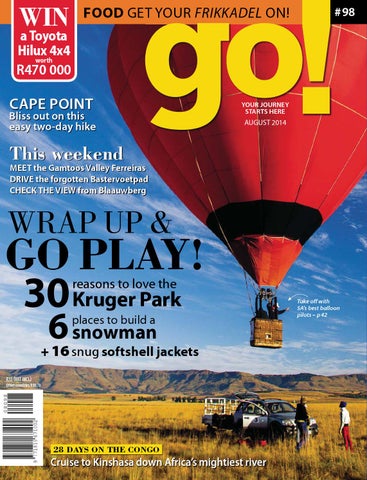 WHITE OUT. In August 2012, a huge amount of snow fell in the southern Drakensberg. To get an idea of the scale of the snowfall, photographer John Costello from Port St Johns went up in a helicopter and captured this dramatic image. 102 August 2014

Underberg is the hub of the southern Drakensberg and the launch pad for Sani Pass (2 873 m), the highest drivable pass in South Africa. It’s also a pretty decent place to go looking for snow. Underberg itself is more than 1 500 m above sea level, and there’s always chance of a dusting in the wake of a big cold front. But if nothing has fallen in town, finish your cappuccino and go for a hike in one of the nearby nature reserves like Vergelegen, Garden Castle or Cobham. Or grit your teeth, engage low range and brave the bends up Sani Pass. Practical stuff. Don’t mess with the weather. If you’re hiking, take extra-warm clothes, a charged cellphone, rain gear and a good map. Don’t tackle the pass in snowy conditions unless you have a capable 4x4 and

you know what you’re doing. The road can turn to sludge in an instant. And don’t forget your passport. Go with a guide. If you don’t want to stress, go up Sani with a guide from Sani Pass Tours ( 033 701 1064; sanipasstours.com) or Roof of Africa ( 083 212 7856; roofofafricatours.co.za). If you’re looking for a hiking guide, Underberg resident Philip Grant from Southern Secrets Hiking & Backpacking is your man ( southernsecrets.co.za). Stay over. Accommodation in Underberg and neighbouring Himeville ranges from backpackers’ to guest farms and lodges. For a list of all the best places to stay in the region, get a copy of go! Drakensberg, on sale now in all major supermarkets or from shop.go-southernafrica.com – Jon Minster

When the weatherman points at those ominous cold fronts approaching Cape Town, donâ&#x20AC;&#x2122;t hide under your duvet. Pull on your boots and take the kids to play in the snow!

SNOW GLOBE. If you’re in Suther­ land, a visit to the observatory is a must­do activity. Go on a guided tour of the visitor’s centre and select telescopes including SALT. Booking is essential. Only a limited number of people are allowed on a tour.

BOOGIE ON DOWN (right). Snowboard or ski down AfriSki’s white slopes. You can hire gear from the shop, which stocks a full range of ski and snowboarding equipment for kids and adults.

You’re probably never going to be as rich as Sol Kerzner, which means you won’t be jetting off to the Alps on a regular basis to ski and snowboard. Luckily you don’t have to fly to the northern hemisphere to get your powder fix. AfriSki, at more than 3 000 m above sea level, is only 430 km from Joburg along a decent road. Leave at lunchtime on a Friday and you can be hurtling down the ski slope on Saturday morning. Where? AfriSki is about 80 km from the Caledonspoort border near Fouriesburg. See the website for detailed directions. Practical stuff. The resort is in Lesotho, which means you’ll need your passport. (South Africans don’t need a visa.) The road is passable in a sedan for most of the year, but if it has snowed you’ll need a 4x4 for the last leg up the Mahlasela Pass. Visit the website for weather and road updates, and for other travel info. Don’t worry if it hasn’t snowed – during ski season, the resort has snow machines to keep the slope in action. Stay over. Accommodation includes lodges, chalets and a backpacker lodge. There are good mid-week specials and combo deals that include meals and gear hire. Contact: 086 123 747 54; afriski.net – Leon-Ben Lamprecht

It’s not often that winter is the busy tourist season in a platteland town, but that’s the case in Sutherland. It hosts hordes of tourists looking to freeze their butts off (and maybe see some stars) between June and September. The town is on the Roggeveld Plateau at an altitude of nearly 1 500 m above sea level, exposed to the full brunt of whatever weather is coming in off the Atlantic. With a record low of -16° C, it’s the second-coldest place in South Africa after a little place called Buffelsfontein in the Molteno district of the Eastern Cape, where the mercury once fell to -18,6° C. Where? Sutherland is about 350 km from Cape Town via the N1 and the R354. Practical stuff. If there’s no snow, don’t worry, there’s still plenty to do. Go check out the famous astronomical observatory, home to the Southern African Large Telescope (SALT), and sign-up for a star-gazing session at the observatory or in town ( saao.ac.za; sutherlandinfo.co.za). If you need to thaw come sundown, park off in front of the fire at the Sutherland Hotel ( sutherlandhotel.co.za), or tuck into some delicious Karoo lamb chops at Cluster d’Hote ( clusterdhote.co.za). Stay over. There are lots of accommodation options in town and on the surrounding farms. We can recommend Rooikloof Guest Farm on the R354 a kilometre south of town ( 023 571 2607; rooikloof.co.za). – Sam Reinders

For most of the year, Nieuwoudtville is a sleepy dorp on the Bokkeveld Plateau. But come August and September, the landscape becomes a sea of colour as long-dormant bulbs push up into the sunlight. Indeed, the landscape around town has more than 300 species of geophytes, making it a must-visit spot on any springtime tour to Namaqualand and the West Coast. But there’s more to the town than spring flowers. Like Sutherland, it’s high, exposed and remote. If you’re feeling a little freaked out by the pace of city life, book into a cottage with a fireplace, pack a novel or two and hide away for a few days. If you’re lucky, the landscape might even be dressed in white… Where? Nieuwoudtville is about 350 km north of Cape Town via the N7 and the R27. Stay over. Van Zijl Guesthouses manage six self-catering houses in town, a restaurant and a caravan park ( nieuwoudtville.co.za). If you want to stay outside town, Papkuilsfontein Guest Farm ( papkuilsfontein.com) is world class. – Jon Minster To see Nieuwoudtville during spring, turn to page 18. – Ed.

SHEEP THRILLS (above). Winters are harsh on the Bokkeveld Plateau around Nieuwoudtville. Don’t forget your beanie and mittens.

WHERE’S THE SNOW? If you’re travelling to a chilly place and you’re wondering about the weather, visit snowreport.co.za for the latest updates about everything snow-related in southern Africa. The team posts about possible snowfalls, from the Western Cape all the way to the KZN Midlands, including Lesotho. They’re also on Twitter (@snowreportsa) and WhatsApp ( 082 574 2624), so you can stay in the loop if you’re on the move. August 2014 105

CATCH A SNOWFLAKE ON YOUR TONGUE. If you live in the Western Cape, Matroosberg near Ceres is an accessible snow spot. Watch the weather forecast and set off early in the morning to beat the rush.

I’VE GOT CHILLS! A brave mountain biker coasts down the switchbacks of the Swartberg Pass after a dusting of snow. This pass is dramatic in normal weather conditions – snow raises it to a different level!

Your kids probably won’t remember the thousand bowls of cornflakes you gave them for breakfast each morning, but they will remember the time you built a snowman on the bonnet of the car. The highlands to the east of Ceres get regular snowfalls during winter. It’s no surprise, considering that the focal point of the landscape – Matroosberg Peak (2 249 m) is the highest mountain in the Boland. Keep an eye on the weather forecasts. When you see a big cold front coming through with a northwesterly wind turning to the south-east, it’s snow time! Where? Ceres is about 150 km north-east of Cape Town. Practical stuff. Most snowfalls occur on the mountain slopes next to the Bo-Swaarmoed Road, off the R46. This is farmland, so be respectful: Don’t tramp through the orchards and don’t push down fences. Bring your snowboard. If the snow is deep enough, you can ski in the Matroosberg Private Nature Reserve. Contact them to check the latest conditions ( 023 312 2282; matroosberg.com). Stay over. There are lots of accommodation options in and around Ceres. For recommendations, chat to the folks at the Ceres Tourism Bureau ( 023 3161287; ceres.org.za) – Jon Minster

If you want to test your 4x4 skills in a snowy landscape, head up the Swartberg Pass in the dead of winter. The snowman you build at the top won’t be the only thing that is white – your knuckles will also go pale on the steering wheel along this hairy 27 km pass, which connects Prince Albert and Oudtshoorn. If you don’t think your Terios is up to the task, lace up your Hi-Tecs or ride your mountain bike up to the top. On a clear day, the views of the Great Karoo on the one side and the Little Karoo on the other are out of this world. Practical stuff. Take it slow and remember that ascending traffic has right of way. You’ll find the deepest snow at Ou Tol near the top of the pass. Check with the tourism office in Prince Albert ( 023 5411 366; patourism.org.za) or Oudtshoorn ( 044 2792543; oudtshoorn.com) about local weather conditions, and if the pass is open. Stay over. There are lots of options in both towns. We can recommend Karoo Khaya in Prince Albert ( 076 372 1666; karookhaya.co.za) and Wilgewandel Holiday Farm between the pass and Oudtshoorn on the R328 ( 072 784 6732 wilgewandel.co.za) – Sam Reinders