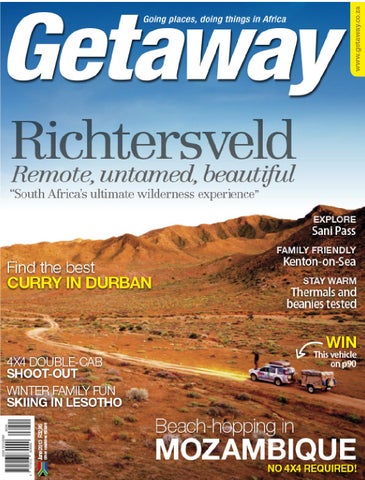 On the piste in Africa You donâ&#x20AC;&#x2122;t have to fly to Europe in search of snow and slopes. Lucy Corne-Duthie strapped on a pair of skis and found powder and all-important aprĂ¨s-ski in the highlands of Lesotho.

Temperatures are often below freezing in the Afriski winter, but the Alpine-style accommodation is always cosy.

proudly overcompensates for in character. The Gondola Café, the on-site bar, is

fixed to the ceiling. But then, the entire

where you’ll find most of the character …

weekend had been full of memorable

and the characters. Inside, professional-

scape, the surprise victory in my first

bumboarding race, being the sole skier

behind the mountains. The resort is

on a pristine piste. Oh, and the fact that

secluded and driving to find dinner or

this on- and off-piste action all happened

drinks isn’t an option, so a great effort is

not in Europe nor Canada, but right here

made to ensure you’re happy to be stuck

Afriski is the feather in Lesotho’s Ba-

once the slopes have closed for the day –

is important and the ski instructors moon-

at the end of a long, winding and rutted

light as entertainers after dark, with starlit

road in the Maloti Mountains. The 80-

torch parades on the slopes, Caribbean

singalongs and a ‘snow dance’, loosely

and sunny, and it’s tough to imagine that

based on the Haka. The entertainment

in a couple of hours, you’ll be swapping

has an air of a bunch of mates putting on

sunglasses for goggles and hitting the

an impromptu show, and you somehow

feel a part of the team just by being there.

essential Africa behind as the back-to-

With space for 232 people to sleep over,

the resort appears intimate and you

towards the first smattering of snow.

From the highest point of the drive, the

After a few glühweins, it’s time to head

in for dinner, stopping for a spot of speed

stargazing on the sub-zero shuffle along

of snow on a rock-strewn mountainside.

icy paths to the Sky Restaurant. The

We jump out to take photos of what feels

restaurant has almost everything you’ll

need: a roaring fire, a pile of board games

us and the brisk mountain air makes us

realise we’ve made a rookie mistake. On

not always have is a great deal of food.

forced to acknowledge we haven’t packed

to those on the slopes, it doesn’t do much for the roads, and sometimes deliveries

If you’ve ever fancied a side of serenity with your snowplough, you’re going to love this.

don’t reach Afriski for a few days. There’s a comical air to ordering, as each item we choose runs out almost as soon as the request leaves our lips. But no-one really minds and somehow it all seems to add to the air of camaraderie. is because they haven’t wound their way

up the potholed pass to eat; they’re here

in ski resorts, that which lines the paths

to ski. Early the next morning that’s

between the chalets, restaurant and bar

exactly what I do while hubby, a non-

is the real thing and it’s cold. Very cold.

skier, makes it his personal goal to

explore the ‘off-piste’ action (which

metre-long slope suited to beginner and

beer and ‘researching’ which spirit makes

the best addition to hot chocolate).

to perfect their snowplough (see our

The real reason no-one cares, though,

der on the slopes has had a helping hand

He doesn’t know what he’s missing.

beginner’s guide on page 72) before

Skiing in Lesotho is wonderful. After

catching the button lift up the main trail.

learning in busy ski schools in the French

Alps, my only other downhill stint was on

well for the weather. Although the pow-

South Korea’s dangerously crowded slopes. Never have I skied alone, but that’s how I spend the first hour at Afriski, taking the button lift to the top of the slope and traversing back down without passing a single person. The run isn’t too challenging and if you’re after some double diamond action (that is, some truly hard-core pistes), it’s probably not the resort for you. But if you’ve ever fancied a side of serenity with your snowplough, you’re going to love this. It’s not always quiet, of course; the start and end of the season are the best times to visit, since they fall outside of school holidays. Early morning is the time to ski solo – or at least without worrying about lift queues. By lunch, day trippers have joined overnight guests and things begin to get busier. The slopes attract all sorts: a Joburg couple whose pricey quilted jackets belie the fact that this is their first time on the piste; a French family living in Cape Town

who are so thrilled with the empty slopes

as he has nothing to protect them from

that they make a pact to return each year

the snow spraying up. In the absence

instead of making the pilgrimage home –

of goggles, I don my sunglasses and it

there are even a few blanket-clad Basotho

seems that this added dose of cool (it’s

shepherds watching from the foot of the

dark outside) helps my bumboarding

slope. I feel like I complete the melting pot

technique. It’s so disorienting that I have

– a lone skier in a ridiculous makeshift

no idea I won until we’re heading back

into the Gondola Café to warm up.

and a multicoloured woollen jacket. Most of the skiers, snowboarders and

après-skiers are South Africans, here for

envisaged. It also transpires that there’s

a chance to experience what is often an

one last activity on the agenda: the

unaffordable adventure. Even before

even lesser-known sport of upside-down

you factor in the cost of getting to an

shooters. The ‘prize’ for winning an event

is to be hoisted into the bindings of a

time. But spending time on Lesotho’s

board fixed to the ceiling and to take a

slopes, including equipment hire and lift

swig of the house shooter – a thankfully

per day if you stick around for a while.

hoist participants right-side-up to take the

Alas, our trip was coming to an end,

shot and I find I’m not too terrible at this

but before nursing the aches that two

‘sport’ either. At least, I don’t spray it out

days on the piste will inevitably bring,

of my nose as I thought I might. But to

we have a few other aches to acquire.

be honest, the community spirit at this

The sport of bumboarding is an under-

resort, where fun and games are as much

reported one. Its rules are simple: hitch a

a part of the experience as scenery, is so

ride up slope on snow plough, sit on butt-

strong that I feel no-one would mind too

much if somebody snorted Cherry Sourz

at them from a great height. And I think

at break-neck speed (or at least break-

bum speed). In hubby’s case, you can

aBOVe: Visit at the start or end of the skiing season and you’re likely to get the slopes to yourself for a while.

Plan yOur trip GettinG there

in the Ski Shop

Afriski is a five-hour drive from Joburg, via Bethlehem in the Free State. Enter Lesotho at Caledonspoort Border Post (open daily from 06h00 to 22h00). There is a R30 toll for light vehicles. Liphofung Cave, which harbours San paintings, is a worthy stop, sitting just off the main road about 40 kilometres from Afriski (look out for the sign). Deeper into Lesotho sit two superlative parks, Bokong Nature Reserve and Ts’ehlanyane National Park. Both are adored by hikers, but in winter the biggest draw is the former’s Lepaqoa Waterfall, which freezes solid.

FirSt thinGS FirSt Beginners are advised to rent gear as it’s expensive to buy. Afriski hires it out at hourly and daily rates; Tiffindell includes gear in its packages. Resort rental shops should be your first stop; be prepared to spend an hour finding suitable gear. Get the riGht Size Boots need to be cosy, but not restrictive. You must be able to wriggle toes and your heel musn’t move when you lean forward.

on the SLope Stay here

When to Go The 2013 ski season runs from 6 June to 1 September. At other times of year, the resort offers adventure activities such as hiking, abseiling and quad-biking.

on the SLopeS A one-day snow pass, giving access to the slopes and snowboarding park, is R350, while daily equipment hire is R295. Daily rates decrease if you opt for a multiday stay. Lessons are compulsory for first-time skiers, with half-day group classes costing R300 a person. The Pudi Ski School caters to those aged four to 14 (half-day course R250).

MaSter the MoonWaLk Walk around to get used to the boots. They’re heavy and shaped to keep legs bent and bum out so you lean forward.

Where eLSe to Get your SkiS on in Southern aFriCa After a long absence, the Eastern Cape’s Tiffindell will make a comeback this winter. Plagued by financial troubles, the downhill ski resort closed in 2010 and sat vacant until ski enthusiast Lew Campbell snapped it up last year. Like Afriski, it features a main piste and a beginners’ slope, plus Alpine-style accommodation, ski and snowboard lessons and one of Southern Africa’s highest pubs. Tiffindell’s season begins on 2 June 2013. Go to www.tiffindell.co.za for more information.

Get uSeD to the SkiS Start on a small slope (called a bunny hill) or flat ground and place the skis horizontal to the slope. Step into one ski at a time for stability, clipping on the one closest to the bottom of the slope first. Get used to the gliding sensation with just one ski before putting on the other. the SnoW pLouGh Start with skis together facing forward and slowly edge yourself forward. When you’re on the move, change into the basic position called the snow plough: angle your feet to form a V-shape with the skis, keeping your toes pointing towards each other with a gap between the front of the skis. Splay your heels to widen the gap at the back, then lean forward, rolling your feet inwards. This position lets you go forward, but gives you the most resistance and speed control. you WiLL FaLL Skiing is easy if you remember the basics: start small, don’t panic, look ahead and not at your skis, lean forward, make a very wide snow plough to stop, and be patient. Melanie van Zyl

Accommodation in the resort covers a range of budgets, starting with basic bring-your-own-bedding backpacker rooms from R190 a bed. En-suite double rooms start from R1 200 a night and there are six-sleeper apartments from R3 600 a night. Three- and four-day package deals are available at discounted rates. Day visitors are welcome. To find a place to stay in Lesotho, turn to the Getaway Guide on page 125.