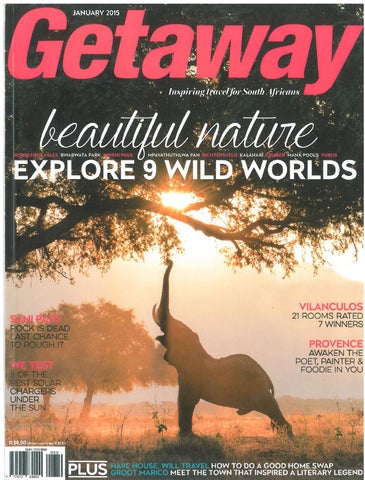 Sani Pass is set to morph from a hairy 4x4 route into a scenic Drakensberg drive sedan cars can tackle. Marion Whitehead bids farewell to an icon of South African travel before the bulldozers move in

If you don’t get the angle right on Sani’s switchbacks, you’ll have to do scary three-point turns, rolling back to the crumbling edge.

Sani Pass begins at the border of the uKhahlamba-Drakensberg Park World Heritage Site, where the new tarred road from Himeville ends at the ruins of the Good Hope Trading Post, which now serves as an informal taxi terminus. From here, the gravel road winds up the lush valley carved by the rushing Mkhomazana River, past the start of the Giant’s Cup hike and grassy mountain slopes dotted with Highveld proteas. Potholes and occasional rocks poking through the surface mean you have to keep your eyes on the road, despite the distracting scenery. A handy view site provides the first glimpse of the famous zigzags at the top of the pass. Pretty waterfalls appear next to the road and you can slosh through a couple of streams – it’s a lovely spot to let the kids out to play while you enjoy prime birding country. The South African border control point is on the last fairly level piece of ground and is a good eight kilometres from the actual border at the top. At the border post, you’ll need more than just a passport: a 4x4, two wheels or a strong pair of legs. After Whisky Spring, the road starts climbing a little more seriously. I stopped at a couple of well-placed view sites to take photos of ant-sized vehicles grinding up the valley. After Suicide Bend comes the zigzag section that gives the pass its fearsome reputation. It looks more like a giant pile of carelessly discarded rubble than a road. Treacherous switchbacks climb 400 metres within three kilometres. It was time to engage low-range.

Me tres above se a le vel

he narrow 19-kilometre route started out as a mule track used by traders between the remotest part of the mountain kingdom of Lesotho and KwaZuluNatal, and was just wide enough for pack horses to pass one another. It cut a crazy zigzag scar into the Drakensberg near Himeville, dropping 1 300 metres off the escarpment. Donkeys slipped and fell sometimes, the stench of their decaying carcasses a warning to others. Then daredevil former World War II Spitfire pilot Godfrey Edmonds decided to drive a Willys Jeep up Sani Pass in 1948. Gangs of men had to bounce the vehicle around the tight hairpins on the upper section. It took him eightand-a-half hours to get to the top, but he made it – and the seed was sown for others to follow. Most notable was David Alexander and his Mokhotlong Mountain Transport company, named after the closest Lesotho town to which his vehicles started ferrying people and goods from the Drakensberg foothills in 1955. ‘No matter how cold it was, one sweated from pure unadulterated fear and funk,’ said Alexander. Many regarded his venture as a harebrained scheme and thought he’d lost the plot when he advertised to take tourists along for the ride. The first was a smart Englishwoman, wearing stockings and high heels, who enjoyed the trip despite having to walk in a number of places. The route we travel today in 4x4s was the result of an upgrade in the 1970s and the highest, worst pass in South Africa has changed little since then.

Himeville is 214 kilometres from Durban and 550 kilometres from Johannesburg. From the N3 south of Howick, take the R617 to Bulwer and Underberg, then drive to Himeville and follow the signs to Sani pass. Lesotho border post GPS S29 35 04.2, E29 17 08.4

Allow at least two hours to travel each way on the pass, more if you stop for photos and to picnic, or if the weather is bad. From the bottom, itâ&#x20AC;&#x2122;s best to leave between 8am and 8.30am so you miss the taxis coming down from Lesotho and avoid eating dust in a convoy of tour vehicles going up around 9am sA border Control ViewPoint

THIS PAGE Sani pass creeps up the valley carved out by the Mkhomazana River. OppOSiTE pAgE Lesotho farmers lead a tough life, including facing icy winters.

Sani Pass Hotel at the base of the pass is an upmarket Drakensberg resort with plenty of activities for families, including golf, horse riding and bowls. I pulled into Sani Lodge Backpackers nearby and found out why it’s one of the top backpacker establishments in South Africa. Its campsites, clean dorms and private en-suite rondavels come at budget prices and its communal kitchen and lounge are great places to make friends and find out about hikes, pony trekking, mountain biking, rock art trips and other activities offered by Drakensberg Adventures. The home-made ice cream at their Giant’s Cup Café had me coming back for more and the delicious meals are made mostly from organic produce. Sani Pass is a high point in any traveller’s memory bank. Go before the bulldozers finally tame it.

Various tours and hikes, including a guided day trip of the pass at R580 per person or a two-day pony-trekking trip at R2 050 per person.

from R30 a vehicle, depending on size.

*Prices correct at time of going to print

Some of the corners were too tight for the Land Rover I was driving, and I had to roll back towards the crumbling edge to make three-point turns. But the Landy made up for this shortcoming at Ice Corner. This spot doesn’t get sunshine from autumn to spring and there was a frozen river of ice across the road. I took it at as much of an angle as I could so at least one or two wheels could bite into gravel rather than ice. The Landy’s traction control did the rest and we powered upwards. Later I watched a couple get stuck there, the wheels of their car spinning. When driving Sani, upcoming vehicles have right of way – for which I was grateful when labouring up narrow sections. I returned the compliment on my way down and waited on wider bends to allow oncoming traffic to pass. The Lesotho border post marks the top of the pass at 2 873 metres and the officials gave me a friendly welcome as I showed my passport and paid road tax. Don’t think that because the border fence has sagged to the ground you can skip the formalities here and hop across to Sani Mountain Lodge for a hot chocolate in one of the highest pubs in Africa. The Lesotho cops don’t take kindly to such notions and offer far less comfortable accommodation than the lodge, which many remember as Sani Top Chalet before it changed hands in 2012. Lunch on their deck affords a breathtaking panorama all the way to Pietermaritzburg. Some adventurous souls travel through Lesotho and drive down Sani Pass, but the majority of visitors come up from the Himeville area as day trippers, either with a tour company or under their own steam. Sani Mountain Lodge’s rondavels have been improved and they’re comfortable, if expensive, but staying over gives you a chance to explore Sani Top on horseback and hike with a guide. I wouldn’t try the nearby backpackers until its bathrooms are revamped.

Sani upgrade timeline october 2012 A six-year Environmental Impact Assessment process is concluded, investigating five options for Sani Pass – from doing nothing to the KwaZulu-Natal Department of Transport’s proposal to create a hard surface all the way to the top (tar on the lower section and concrete on the upper.)

July 2o13 The Department of Environmental Affairs rules in favour of the option supported by Sani Wildlife and the Wildlife and Environment Society of South Africa (Wessa) and the local tourism industry: to improve the present pass as a gravel road accessible to all vehicles, retaining its character and charm as a tourist destination.

august 2o13 The KwaZulu-Natal Department of Transport, supported by Ezemvelo KZN Wildlife, appeals the decision, saying a wider, hard surface, estimated to cost R31.2 million per kilometre (R602 million for 19 kilometres), would be less costly to maintain in the long term than a gravel road.

May 2o14 Minister of Environmental Affairs Edna Molewa overturns her own department’s ruling against tarring Sani Pass, leading to accusations of political meddling to give Lesotho better access to KwaZulu-Natal’s ports. Wessa’s Sani branch has appealed to the Public Protector and the South African Human Rights Commission, as it feels the appeal process was unfair. Russell Suchet, vice chairman of the Sani branch, said the commission has declined to pursue the matter and he is still awaiting news from the Public Protector.

giving new roads the thuMbs-up support for tarring sani pass A number of groups welcome the tarring of Sani Pass and believe the new surface will have economic and environmental benefits. Ezemvelo KZN Wildlife spokesman Musa Mthambo says ‘the hardened surface would assist to reduce environmental degradation through soil loss. It will reduce the need for quarrying inside the park. More people would also be able to access the pass as opposed to the few select people. From an economic point of view, it would facilitate growth through a viable trade system between South Africa and Lesotho’. other developMents in the area Meanwhile, a Chinese-led construction crew is busy blasting and widening the 53-kilometre road from Mokhotlong to Sani Top over the Kotisepola or Black Mountain Pass (3 250 metres) in preparation for tarring it. The Department of Transport expects work to start on the lower section of Sani Pass in February, with the construction of two bridges and seven box culverts.