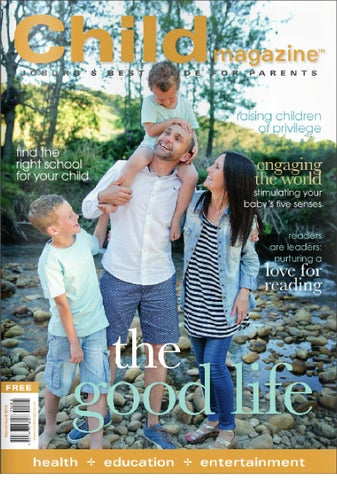 ski time PETER KILPIN and family hit the ski slopes at two local resorts and had the time of their lives.

outh Africa is known for its outdoor experiences,

The big drawcard is the quality of ski lessons. Most of

slopes. Both resorts can potentially have a ski slope of

like viewing the Big Five, but you may be surprised to hear that snow skiing is also on the list of

the instructors are foreign, which means you get exactly

1km in length. Do not be put off by this, as the slopes are

the same tuition at 25% of the European cost. It makes sense to start local and then explore the European resorts

well-groomed and 1km is more than sufficient to hone one’s skills.

great outdoor activities families can enjoy. Tiffindell in the Eastern Cape and Afriski in Lesotho both offer these unique opportunities.

so why go? A skiing holiday to Europe will cost around R20 000 per day (including flights) for a family of four. A ski holiday to either Tiffindell or Afriski, on the other hand, will only cost R5 000 per day. These resorts are primarily aimed at families who have never skied before. Children are just as excited on the nursery slopes wherever they are in the world.

at a later stage.

when to go? Both Tiffindell and Afriski promise a three-month season from the beginning of June to the end of August. Realistically, the best time to go is during July and August when there is a better chance of natural snow. Both resorts have snow-making facilities, so even if there is no natural snow, there will always be enough snow to cover the nursery, intermediate and most of the main

where to go? Tiffindell… ✻ is located just south of Lesotho near the small Eastern Cape town of Rhodes. ✻ offers an all-inclusive option, which includes DBB (dinner, bed and breakfast) accommodation, ski hire and a ski pass for the duration of your stay – no hidden costs. Packages can be for three, four or seven nights. ✻ No passport required.

On the slopes at Tiffindell

European resorts. You can therefore effectively get in at least four days of skiing when staying four nights.

✻ is located in the north of Lesotho. ✻ is an easy drive from Joburg or Durban.

Both resorts are situated high up in the

mountains at about 2 700m – higher than most

nights and the option of adding on additional ski services, meals, and more.

Both resorts offer a similar standard of service and infrastructure, so your decision would really be based on your preferred location. Afriski is definitely more accessible for the majority of us and it has enjoyed many successful seasons. Tiffindell has had a chequered past but, based on my recent visit, I was pleased to see that the new owners are doing their very best to create a winter wonderland for families.

transport can be arranged if conditions are not suitable.

upon arrival You will be well looked after on arrival, but be prepared for a hectic first few hours as skiing requires a lot of admin, such as ski passes, ski hire and ski lessons. Plan your arrival outside of the very busy times (between 12pm and 4pm), as the majority of the guests arrive on the same day – referred to as the dreaded “changeover day” in European ski resorts.

getting there There is nothing better than a well-organised road trip in the July school holidays. Tiffindell is a 12-hour drive from both Cape Town and Joburg. You can make the most of the journey by stopping over in a country town, such as Graaff-Reinet. Afriski is an easy five-hour drive from Joburg with the option of spending a night in the beautiful Free State town of Clarens or visiting the Golden Gate Highlands National Park.

There is nothing better than a well-organised road trip in the July school holidays.

It is a good idea to spend a night close to either Tiffindell or Afriski, as both resorts allow free use of their slopes on the day of your arrival – unlike

There is nothing more amusing than watching a fellow beginner snow-ploughing down a gentle slope, unable to stop. inside tips

entertainment options for children and parents. They both

offer child-friendly ski schools, as well as a playroom and

opting for a private lesson. Besides the obvious cost, it is

There is a short bum-board run for children, which is also great fun for the whole family.

other like-minded guests. There is nothing more amusing than watching a fellow beginner snow-ploughing down a gentle slope, unable to stop.

Then there is the après-ski. This is no different from a normal European experience – the Austrians do this the

Both resorts accept children from the age of five or

best, especially in the Tyrolean region. Both local resorts

six into their ski schools – helmets are provided for all

have music playing at outside “snow” pubs – Afriski has

children, but as a seasoned skier, I would recommend that

a better one for now (The Cooler Box), but Tiffindell is

everyone wears a helmet. I also suggest that you ask for ski boots that are at

working on this challenge. They also have great pubs – Gondola Café at Afriski and Ice Station 2720 at Tiffindell

least a full size larger than your standard shoe size – there

is nothing worse than having uncomfortable boots. Ski outfits are generally not glamorous, unless you spend thousands of rands on trendy ski gear. I suggest that you beg, borrow or steal whatever ski clothing you

with a large fireplace. “Unusual Fun Adult Behaviour Allowed” is the sign hanging outside Ice Station 2720 – no need to explain any further, but expect to be hanging upside down by skis from the roof. Children are allowed into the pubs with their parents.

can get as it really does not matter what you look like on the slopes – just as long as you are warm (see list of what to pack). Both resorts allow day visitors. This is not ideal, as you miss out on the après-ski part of the holiday, but a good idea if on a budget. There are inns and guesthouses situated within 45 minutes of both resorts.

what to pack It is cold on the slopes, but it can get very warm when skiing for a while, so don’t overdo the clothing. The following items are essential ✻ Ski pants and jacket (do not skimp on these) ✻ Ski gloves (proper ski gloves) ✻ Ski socks (long thick socks that cover your shins)

✻ Sunglasses (preferably with a polaroid option) ✻ Suntan lotion (you can burn quite badly at 3 000m) ✻ Beanie/hat (best to cover your ears) Optional extras ✻ You can wear thermal underwear, but it can get very warm and uncomfortable under ski pants ✻ A good sweat top for under your jacket is a great idea – together with a T-shirt or thermal top ✻ Good mobile camera ✻ Boots for walking in the snow