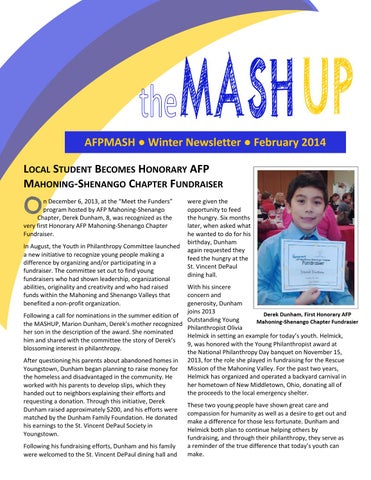 AFPMASH ● Winter Newsletter ● February 2014 LOCAL STUDENT BECOMES HONORARY AFP MAHONING-SHENANGO CHAPTER FUNDRAISER n December 6, 2013, at the “Meet the Funders” program hosted by AFP Mahoning-Shenango Chapter, Derek Dunham, 8, was recognized as the very first Honorary AFP Mahoning-Shenango Chapter Fundraiser. In August, the Youth in Philanthropy Committee launched a new initiative to recognize young people making a difference by organizing and/or participating in a fundraiser. The committee set out to find young fundraisers who had shown leadership, organizational abilities, originality and creativity and who had raised funds within the Mahoning and Shenango Valleys that benefited a non-profit organization.

were given the opportunity to feed the hungry. Six months later, when asked what he wanted to do for his birthday, Dunham again requested they feed the hungry at the St. Vincent DePaul dining hall.

With his sincere concern and generosity, Dunham joins 2013 Derek Dunham, First Honorary AFP Following a call for nominations in the summer edition of Outstanding Young Mahoning-Shenango Chapter Fundrasier the MASHUP, Marion Dunham, Derek’s mother recognized Philanthropist Olivia her son in the description of the award. She nominated Helmick in setting an example for today’s youth. Helmick, him and shared with the committee the story of Derek’s 9, was honored with the Young Philanthropist award at blossoming interest in philanthropy. the National Philanthropy Day banquet on November 15, After questioning his parents about abandoned homes in 2013, for the role she played in fundraising for the Rescue Youngstown, Dunham began planning to raise money for Mission of the Mahoning Valley. For the past two years, Helmick has organized and operated a backyard carnival in the homeless and disadvantaged in the community. He her hometown of New Middletown, Ohio, donating all of worked with his parents to develop slips, which they the proceeds to the local emergency shelter. handed out to neighbors explaining their efforts and requesting a donation. Through this initiative, Derek These two young people have shown great care and Dunham raised approximately $200, and his efforts were compassion for humanity as well as a desire to get out and matched by the Dunham Family Foundation. He donated make a difference for those less fortunate. Dunham and his earnings to the St. Vincent DePaul Society in Helmick both plan to continue helping others by Youngstown. fundraising, and through their philanthropy, they serve as a reminder of the true difference that today’s youth can Following his fundraising efforts, Dunham and his family make. were welcomed to the St. Vincent DePaul dining hall and

MESSAGE FROM THE PRESIDENT

ught, sure, I of President-Elect in 2011, I tho on siti po the t ep acc to ed When I was ask the position of board have to actually step up into uld wo I t tha te da e Th t. tha rs to can do better, I would have two yea n eve d an , off y wa g lon a d president seeme “study.” No big deal, right? nual Leadership ate to be able to attend the an tun for s wa I r, yea t las of er se In Octob Luckily, it was in Pittsburgh, clo s. ize an org al on ati ern Int P AF Conference that kind-of-sort-of get d affordable, and in a city I can an le sib fea th bo it ke ma to out in a enough all things presidential, I found in ing tak re, the s wa I ile wh around in. WELL, is. Holy cow, I ty this president thing really bili nsi po res me eso aw an at that I’ll be hurry wh have I done? There is no way at wh at if in, ep cre to d rte sta ers who came before me! Wh oth thought as panic ny ma so d an Pat , ssi Cri , s of Shellie, JoAnn move away, able to follow in the footstep peached???? I would have to im t go o wh P AF of y tor his ent in the I end up being the only presid for sure. conference, I not nic subsided somewhat. At the pa ial init s thi , ed nd fou un re got to we ent over the years, but I also sid When I learned that my fears pre P AF of e rol the ed um those who ass patient and willing only gained a new respect for us resource, knowledgeable, ulo fab a are ey Th al. on ati nal Intern d not only to moving the natio meet the terrific staff at AFP ate dic de ls na sio fes pro of up ey are a gro become the best to help at the drop of a hat. Th draising and helping all of us fun of on ati voc the to d tte mi wn. organization forward, but com now and they never let me do es tim l era sev m the on led that we can be. I’ve cal and grow. We have a MASH) is poised to advance P AF as wn kno y tel na tio fec strive to offer AFP Mahoning / Shenango (af port from the community. We sup ul erf nd wo d an ers mb ttee me tted champions of great board, dedicated commi to your work. We are commi nt eva rel d an ful ing an me you’ll join programs and events that are r support. If you’re not, I hope you for you nk tha er, mb me you are a fundraising as a profession. If ng! us and see what you’re missi

2013 NATIONAL PHILANTHROPY DAY AWARDEES On Friday, November 15, 2013, the Mahoning-Shenango Chapter of AFP held their 23rd Annual National Philanthropy Day Awards Banquet. Eight individuals, groups and businesses were honored for the difference each made in the community through their philanthropic activities. Below is a brief description of each award and 2013’s winners.

ALFRED AND SUZANNE FLEMING Outstanding Philanthropist This award is given to an individual or family that has demonstrated exceptional generosity and civic responsibility by providing financial support and leadership for a charitable cause or causes; by example encourages and motivates others to support a philanthropic cause; contributes significantly to other community efforts; and advances philanthropy in general.

GASSER CHAIR COMPANY, INC. Outstanding Corporate Philanthropist This award is given to a corporation or corporate foundation that has an exemplary record of civic responsibility in support of a charitable cause or causes; demonstrates, to the extent necessary, a substantial impact upon philanthropic programs; distinguishes itself by the encouragement or creative and innovative programs.

DIRUSSO’S SAUSAGE Outstanding Small Business This award is given to a corporation or corporate foundation, of 100 employees or less, that has an exemplary record of civic responsibility in support of a charitable cause or causes; demonstrates, to the extent necessary, a substantial impact upon philanthropic programs; distinguishes itself by the encouragement or creative and innovative programs.

RITA JOSEPH O’LEARY Outstanding Volunteer Fundraiser This award is given to an individual or small group that demonstrates exceptional leadership in recruiting, coordinating and motivating volunteers for fundraising projects; contributes personal time and effort to a charitable cause or causes; influences a fundraising program’s financial success; advances philanthropy in general. Continued on Back

AUT MORI GROTTO Outstanding Civic Organization This award is given to a civic volunteer group that has an exemplary record of civic responsibility in support of philanthropic causes; distinguishes itself by the encouragement of creative and innovative programs; and demonstrates a leadership role in the community.

ANGELA, JOSEPHINE AND JENNY KIKEL Legacy Award (Presented in conjunction with The Mahoning/Shenango Planned Giving Council) This award is given to an individual or family that demonstrates exceptional generosity by providing financial support to a charitable cause or causes through an irrevocable gift from an estate or through a planned gift; and by example, encourages and motivates others to support a philanthropic cause through oneâ&#x20AC;&#x2122;s estate plan. Award may be given posthumously.

OLIVIA HELMICK Outstanding Young Philanthropist This award is given to an individual or group, age 18 and under, that demonstrates exceptional generosity in support of a charitable cause or causes; demonstrates exceptional initiative and leadership in recruiting, coordinating and motivating volunteers to raise funds for a charitable cause or causes; by example, encourages other youth to make charitable gifts and volunteer their personal time to philanthropic causes.

COVELLI ENTERPRISES Special Recognition for Valley Impact This award is given to a select candidate nominated in an alternative category that has shown incomparable generosity, leadership and civic responsibility. The honoree is chosen by the AFP MASH National Philanthropy Day Selection Committee to receive this award if the honoree has provided such outstanding financial support and a monumental impact in the Valley that special recognition is deserved.