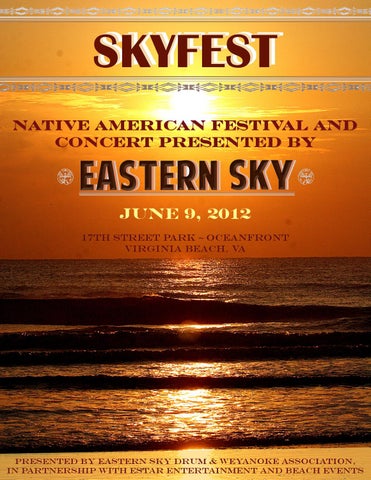 S WELCOME Our SkyFest Committee and our partners bid you a warm welcome. This event has been a long time in planning and we believe long overdue. We have some very talented people here for the powwow and the concert, but SkyFest is more than entertainment. We are here to have fun, enjoy ourselves and to join hearts. We pray that the walls and barriers that separate peoples will one day be gone. Our hope is that each of us will leave SkyFest today with not just more knowledge of each other’s culture, but with more love and understanding for one another. SkyFest is for all people…because we are one. I borrow a quote from our Lakota brother and emcee for the day, Moses Brings Plenty:

“My grandfather once told me, son, the world is full of people but there are only a handful of human beings and at night I look at the stars and I think of my elders, my ancestors…

My grandfather said, I hope I have conducted my life in such a manner that you, yourself will chose to be a human being and encourage and make a stand for the unborn of all nationalities.” The Ojibwe phrase, “Gakina Awiiya” means “We are all related.” The Lakota People will say,“Mitakuye Oyasin,” but it means the same thing. Join us today and let us be of one heart, of one mind, of one Creator. “Wassa Innaabidaa” (We look in all Directions), Sylvia Nery-Strickland, SkyFest Coordinator

Eastern Sky Native American Drum “Wabunoong Gejig”, a drum of peace and healing, wish to share with others, the heartbeat of all peoples. We come together as one spirit and one heart around our drum in hopes that our songs touch others.

In Partnership with Beach Events and eStar eNtertainment

First Inhabitants of Virginia Beach The historic Chesepian or Chesapeake Indians lived in two ‘towns’ (or villages), Apasus and Chesepioc, both near the Chesapeake Bay in what is now the independent city of Virginia Beach. The unearthed site of Chesepioc is located in the present Great Neck area of the city. Archaeologists and other persons have found numerous Native American artifacts, such as arrowheads, stone axes, pottery, and beads in Great Neck Point. Thought to be eastern-Algonquian speaking, archaeological evidence suggests that the original Chesepian Indian people belonged to the Carolina Algonquian. Human remains of 64 individuals removed from the village site, due to modern road building and housing construction, in the 1970’s and 1980’s, were reburied in nearby First Landing State Park in 1997.

Moses J. Brings Plenty is Oglala Lakota born on the Pine Ridge Indian Reservation in South Dakota; he is fluent in the Lakota language, culture and traditions. He is a gifted musician, actor, model and spokesperson. He dedicates much of his time traveling throughout the United States speaking on matters and issues that are close to his heart. As a Lakota, Moses lives and nurtures his vision for the future of tribal America. As a gifted and accomplished musician, he is a traditional drummer, percussionist, and vocalist. He has also contributed his musical and Lakota language spoken word talent to “Silent Star Night,” as well as numerous other CDs. As an actor, he has worked in television, film and theatre. Film credits include: Rez Bomb, Hidalgo, Pirates of the Caribbean, The History Channel’s Comanche Warrior, which was filmed on the Wild Horse Sanctuary in the southern Black Hills, and he also played the role of “Crazy Horse” on The History Channel’s investigating history documentary, Who Killed Crazy Horse. Additionally, he participated in the BBC’s piece Custer’s Last Stand. Moses’ theatre accolades include performances at The Rose Performing Arts Center, Creighton University and the Nebraska Repertory Theatre. He is starring in the soon to be released “Cherokee Word for Water.” Moses is an advocate for Indian elders and youth. He is proactive, and a visionary, about what he as a person, and as an artist, has to offer to the continuation and revitalization of his culture and traditions by giving presentations on the Lakota values of life. As a spiritual leader, he works toward helping the people through traditional ceremony and prayer to provide and build for the youth, a way of life that so many who have come before him have sacrificed to create.

Darryl Tonemah “TONEMAH” A doctor by day, and a singer/songwriter every chance he gets… Award-winning musician, Tonemah, is Kiowa, Comanche and Tuscarora, he has six CDs under his belt, of which, includes his well known hit singles “Pow Wow Snag”, “Rezzylicous”, “I know”, “World of Mine” and others. His songs are filled with thought-provoking metaphors, sharp with emotion, and humor that makes his music easy to relate to while it speaks to the soul. His most recent nominations were for “Best Folk Recording,” and “Best Rock CD” by the Native American Music Awards, “Best Rock CD” by the Aboriginal Peoples Choice Awards, and “Best Country Song”, “Best Rock Song”, and “Best Folk Song”, by the Indian Summer Music Awards. He has also won or has been nominated for best songwriter, best folk album, and artist of the year. His CD, “Welcome to Your Rainy Day” was called a masterpiece by Whispering Wind Magazine.

Tonemah grew up on several reservations and when he “discovered” music he was living on the Standing Rock reservation in North Dakota. He says, “The only radio station we could get was KFYR, an a.m. station out of Bismarck. I knew the livestock report, and the singers and songwriters of the day. I grew up on a steady diet of James Taylor, Paul Simon, Bruce Springsteen, Cat Stevens, Carly Simon and a whole lot more. I loved it! Still do to this day. Those influences show brightly in Tonemah’s music. Today, he is a singer/songwriter in the purest sense and his music combines the energy of rock, the intelligence of folk and the heart of country that creates a musical niche he calls “Native Americana.” He has played at festivals, colleges, universities, coffee shops, schools etc. all over the U.S. and Canada. His storytelling style has become his trademark. Tonemah’s life experiences of growing up on and off reservations, coupled with his professional undertakings, have given Tonemah a truly unique perspective that he brings to his songwriting. During a show it’s hard to discern whether he tells stories between songs, or sings songs between stories. Either way, it is great ride for all!

Spirit Winds is a Native American Flute and Drum ensemble that came into being in 2010. As Crows and Butterfly, Stuart Cardwell and Robin Clark-Guthrie played flutes and performed together for over seven years. They became Spirit Winds when Warren Perkinson joined as drummer, bringing with him years of experience as a member of Youghtanund Drum. Between them, they have recorded a dozen CDs of flute music, chants, and drum. All three are current members of Eastern Sky Native American Drum.

Luis Rivera, Concert Emcee Luis Alberto Rivera was one of eight children born to a migrant farm-worker father and the first son of his self educated mother. When Luis was still young, the family immigrated to the mainland United States from Puerto Rico, and lived in urban areas ranging from East Chicago to the Bronx. After becoming the first member of his family to graduate from college, Luis was employed by an NBC affiliated television station to become one of a few minority television personalities in the New England states. During his tenure as news reporter, Luis became the host of the highest rated bilingual public affairs program in Connecticut. Less than three years later, Luis was asked by ABC to join a television news team in Hollywood, California. There, Luis met and worked with such celebrities as Regis Philbin and many others. Luis embraced his Los Angeles community and was recognized for his sensitivity to diversity, being the sole television reporter allowed by a Native American group to participate in a “Sweat Lodge”, a sacred purification ceremony. Luis lives in Virginia Beach with his wife of 40 years, Norma, and has three sons. After graduating with a Master’s degree in Education, he served many years as a private school Headmaster. At present he is working on an autobiography and is pursuing the production of a public affairs television program, as well as continuing his community involvement.

Thank you SkyFest for honoring our Veterans.

From, A Veteran’s Spouse

• I would like to offer a complimentary credit report on

www.mayorsessoms.com Paid for by Sessoms for Mayor