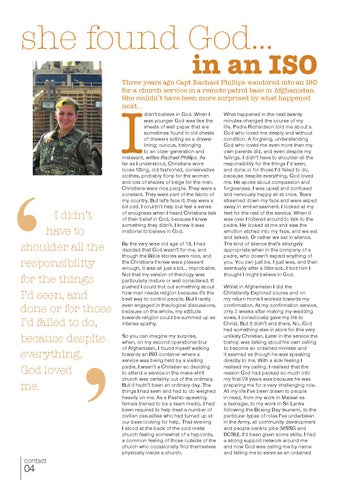 Three years ago Capt Rachael Phillips wandered into an ISO for a church service in a remote patrol base in Afghanistan. She couldn’t have been more surprised by what happened next...

I didn’t have to shoulder all the responsibility for the things I’d seen, and done or for those I’d failed to do, because despite everything, God loved me.

didn’t believe in God. When I was younger God was like the sheets of wall paper that are sometimes found in old chests of drawers acting as a drawer lining; curious, belonging to an older generation and irrelevant, writes Rachael Phillips. As far as I understood, Christians wore loose fitting, old fashioned, conservative clothes, probably floral for the women and lots of shades of beige for the men. Christians were nice people. They were a constant. They were part of the fabric of my country. But let’s face it; they were a bit odd. I couldn’t help but feel a sense of smugness when I heard Christians talk of their belief in God, because I knew something they didn’t. I knew it was irrational to believe in God. By the very wise old age of 19, I had decided that God wasn’t for me, and though the Bible stories were nice, and the Christians I knew were pleasant enough, it was all just a bit... improbable. Not that my version of theology was particularly mature or well considered. If pushed I could trot out something about how man needs religion because it’s the best way to control people. But I rarely even engaged in theological discussions, because on the whole, my attitude towards religion could be summed up as intense apathy. So you can imagine my surprise, when, on my second operational tour of Afghanistan, I found myself walking towards an ISO container where a service was being held by a visiting padre. I wasn’t a Christian so deciding to attend a service in the make-shift church was certainly out of the ordinary. But it hadn’t been an ordinary day. The things I had seen and had to do weighed heavily on me. As a Pashto-speaking female trained to be a team medic, I had been required to help treat a number of civilian casualties who had turned up at our base looking for help. That evening I stood at the back of the cold metal church feeling somewhat of a hypocrite, a common feeling of those outside of the church who occasionally find themselves physically inside a church.

What happened in the next twenty minutes changed the course of my life. Padre Richardson told me about a God who loved me deeply and without condition. A forgiving, understanding God who loved me even more than my own parents did, and even despite my failings. I didn’t have to shoulder all the responsibility for the things I’d seen, and done or for those I’d failed to do, because despite everything, God loved me. He spoke about compassion and forgiveness. I was upset and confused and nervously happy all at once. Tears streamed down my face and were wiped away in embarrassment. I looked at my feet for the rest of the service. When it was over I loitered around to talk to the padre. He looked at me and saw the emotion etched into my face, and we sat and talked. Or rather we sat in silence. The kind of silence that’s strangely appropriate when in the company of a padre, who doesn’t expect anything of you. You can just be. I just was, and then eventually after a little sob, I told him I thought I might believe in God. Whilst in Afghanistan I did the Christianity Explored course and on my return home I worked towards my confirmation. At my confirmation service, only 3 weeks after making my wedding vows, I consciously gave my life to Christ. But it didn’t end there. No, God had something else in store for this very unlikely Christian. Later in the service the bishop was talking about his own calling to become an ordained minister and it seemed as though he was speaking directly to me. With a sick feeling I realised my calling. I realised that the reason God had packed so much into my first 29 years was because he was preparing me for a very challenging role. All my life I’ve been drawn to people in need, from my work in Malawi as a teenager, to my work in Sri Lanka following the Boxing Day tsunami, to the particular types of roles I’ve undertaken in the Army, all community development and people-centric jobs (MSSG and DCSU). I’d been given some skills, I had a strong support network around me and now God was calling me by name and telling me to serve as an ordained 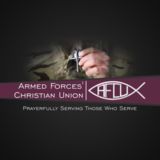