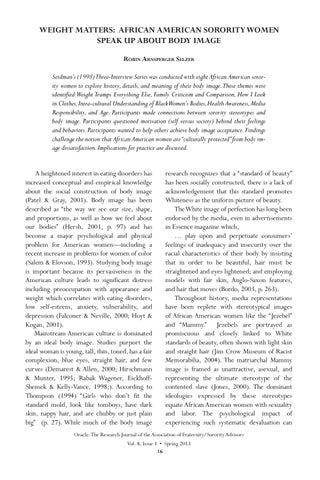 WEIGHT MATTERS: AFRICAN AMERICAN SORORITY WOMEN SPEAK UP ABOUT BODY IMAGE Robin Arnsperger Selzer Seidman’s (1998) Three-Interview Series was conducted with eight African American sorority women to explore history, details, and meaning of their body image. These themes were identified:Weight Trumps Everything Else, Family Criticism and Comparison, How I Look in Clothes, Intra-cultural Understanding of BlackWomen’s Bodies, Health Awareness, Media Responsibility, and Age. Participants made connections between sorority stereotypes and body image. Participants questioned motivation (self versus society) behind their feelings and behaviors. Participants wanted to help others achieve body image acceptance. Findings challenge the notion that African American women are “culturally protected” from body image dissatisfaction. Implications for practice are discussed. A heightened interest in eating disorders has increased conceptual and empirical knowledge about the social construction of body image (Patel & Gray, 2001). Body image has been described as “the way we see our size, shape, and proportions, as well as how we feel about our bodies” (Hersh, 2001, p. 97) and has become a major psychological and physical problem for American women—including a recent increase in problems for women of color (Salem & Elovson, 1993). Studying body image is important because its pervasiveness in the American culture leads to significant distress including preoccupation with appearance and weight which correlates with eating disorders, low self-esteem, anxiety, vulnerability, and depression (Falconer & Neville, 2000; Hoyt & Kogan, 2001). Mainstream American culture is dominated by an ideal body image. Studies purport the ideal woman is young, tall, thin, toned, has a fair complexion, blue eyes, straight hair, and few curves (Demarest & Allen, 2000; Hirschmann & Munter, 1995; Rabak Wagener, EickhoffShemek & Kelly-Vance, 1998;). According to Thompson (1994) “Girls who don’t fit the standard mold, look like tomboys, have dark skin, nappy hair, and are chubby or just plain big” (p. 27). While much of the body image

research recognizes that a “standard of beauty” has been socially constructed, there is a lack of acknowledgement that this standard promotes Whiteness as the uniform picture of beauty. The White image of perfection has long been endorsed by the media, even in advertisements in Essence magazine which, … play upon and perpetuate consumers’ feelings of inadequacy and insecurity over the racial characteristics of their body by insisting that in order to be beautiful, hair must be straightened and eyes lightened; and employing models with fair skin, Anglo-Saxon features, and hair that moves (Bordo, 2003, p. 263). Throughout history, media representations have been replete with stereotypical images of African American women like the “Jezebel” and “Mammy.” Jezebels are portrayed as promiscuous and closely linked to White standards of beauty, often shown with light skin and straight hair (Jim Crow Museum of Racist Memorabilia, 2004). The matriarchal Mammy image is framed as unattractive, asexual, and representing the ultimate stereotype of the contented slave (Jones, 2000). The dominant ideologies expressed by these stereotypes equate African American women with sexuality and labor. The psychological impact of experiencing such systematic devaluation can

Oracle: The Research Journal of the Association of Fraternity/Sorority Advisors Vol. 8, Issue 1 • Spring 2013 16